Because of some organizational issues involving the Society that I encountered at the time, I resigned as president of the Long Branch Historical Society on June 19, 2012.

What are the next steps for the archives of the Long Branch Historical Society? (post of June 9, 2012)

A selection of archival materials, otherwise destined for appraisal by an archivist from the Toronto Archives, has been moved to a storage facility on Birmingham Avenue. Whether or not the material was moved with prior authorization of the Society is a matter of debate.

A third set of materials – large pieces of furniture and the like – has reportedly been moved to a storage facility in Brampton. [Note from Jaan, Jan. 4, 2022: Barry Kemp may have some details regarding the material taken to Brampton, to an airplane hanger, as I recall.] 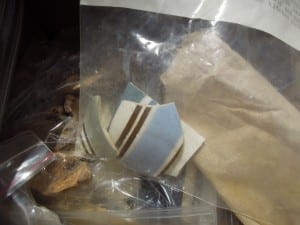 No decison has been made on what to do with a small selection of artifacts from the Colonel Samuel Smith homestead site at the former Parkview School, 85 Forty First Street in Long Branch. The artifacts were dug up in 1984 during a preliminary archaeological survey of the site. Normally, they would be destined for a facility operated by Museum Services at the City of Toronto, where the rest of the artifacts from this dig are located. Jaan Pill photo

The long-term preservation and conservation of the archives remains in doubt. A previous plan involved arranging for an appraiser from the Toronto Archives to review the archival materials.

This was to be a first step in the eventual handing over, to the Toronto Archives, of paper documents from the Long Branch archives.

There was support for the move of materials to the Toronto Archives among a majority of members who shared their views regarding the next steps for the archives;  to access a report, click on the following link:

Comments from members to June 12, 2012 regarding next steps for LBHS archives

The Society, which was was founded in 1983 or close to that year, has done a great job of inviting speakers to discuss topics of historical interest. It also organized many other community events in the early years. I’m highly inspired by the work it has done in the past – such as its sponsorship of a preliminary archaeological dig in 1984 at the Colonel Samuel Smith homesite – and I have the hope that it will do productive work in the future.

Barry Kemp, in his role as president, has done an exemplary job in the previous twelve years in keeping the Society going. For many years, Barry had been seeking a volunteer who would take on the role of president in his stead. Barry asked me in the summer of 2011 if I would be willing to take on the role of president. I agreed and was elected at a meeting on March 20, 2012. That meeting featured a well-attended talk about the history of Canadian aviation, by Honorary Colonel Gerald Haddon, grandson of J.A.D. McCurdy, Canada’s first aviator. I wish the Society every success in the future under new leadership.

Nov. 4, 2013 update: The Long Branch Historical Society is currently no longer functioning. It’s in a state of hibernation, so to speak. It’s my hope that someone will start it up again in future decades. [Added note, Jan. 7, 2022: In the meantime, other organizations – such as the Long Branch Neighbourhood Association, the Lakeshore Grounds Interpretative Centre, and the Etobicoke Historical Society – take on roles that a local historical society would otherwise take on.]