Please note: I’ve included this in the Category that deals with Malcolm Campbell High School Stories (Before & After) as it concerns a particular way of seeing the world, that was prevalent in Canada in the 1950s.

A Sept. 26, 2013 Globe and Mail article featuring the Daniele Corp. is entitled: “The developer who wants to make Canadian housing affordable.”

A Dec. 16, 2013 Globe and Mail article is entitled: “Beyond development – Regent Park builds its community with song.”

By way of an update, the following post is also of relevance:

I became interested in the history of Regent Park (in Toronto) after reading an article by Sean Purdy in Home, work & play (2010) describing two National Film Board documentaries produced in 1953 and 1994 about this neighbourhood.

Urban planning in the 1950s

According to Purdy, the 1953 film about Regent Park continued in the tradition of the war-time NFB founder, John Grierson, in crafting a “propaganda statement” about the value of public housing projects as viewed by urban planners in the 1950s.

Although the documentary made extensive use of fictionalized dramatic scenes, the filmmakers ensured that the final product conveyed an “air of authenticity and realism” (Home, work & play, 2010, p. 102). Toward that end, each scene “was carefully crafted, acted, sequenced, and narrated to construct this ‘realist’ vision.” The voice over aimed to express an authoritative commentary concerning the benefits of post-war urban renewal.

I’m reminded in turn of a comment by Gregory W. H. Smith concerning what Erving Goffman learned about documentary making while working at the National Film Board in Ottawa during the Second World War.

Smith remarks that while Goffman’s duties were mostly low-level and routine, “he could not have avoided exposure to discussions about filmic practices for decomposing ordinary life into elements that could then be reconstructed as a representation of reality [Y. Winkin, ed., Erving Goffman: Les moments et leurs hommes (1988), pp. 20-21, cited in Smith 2006, pp. 14-15].”

Among the first things that struck me in the above-noted Regent Park study was that the original late 1950s Regent Park south development “won a Massey Medal for Architecture, but proved unpopular with tenants” (p. 10).

Awards for architectural excellence constitute a powerful form of storytelling. They provide a narration about how excellence is viewed at a given time, by a given audience. The National Film Board documentaries referred to in an earlier blog post similarly shared stories crafted for given times and audiences.

With regard to the 1950s, the “modern movement” in architecture comes to mind – a direction of thought that Ken Greenberg (2011, p. 22) characterizes as “an intellectual time bomb with a very long fuse” fueled by good intentions.

With regard to Farewell to Oak Street (1953), Sean Purdy (2010) remarks: “The medium of film with a mass, popular audience was a convenient and effective means to get across this message of the urgent necessity of social engineering” (p. 104).

With regard to Return to Regent Park (1994), Purdy notes that the more recent documentary offers what he characterizes as a “less preachy” look at Regent Park than the 1953 version. He views the inclusion of the voices of tenants as a welcome addition.

According to Purdy, however, the film “also (unintentionally) produces a damning characterization of the homes, neighbourhood, and residents of Regent Park by what it focuses on and what it omits. Drugs and crime, for example, are not discussed in any kind of social or historical context. As in its predecessor, the viewer gets little sense of the whys.”

Whether or not the current redevelopment of Regent Park addresses the whys that Purdy refers to, including social geography, remains to be seen. At any rate, the research and planning that has been conducted is impressive:

Greaves  provides a nuanced account of the wide range of forces at play in development of Regent Park starting in the postwar years. She describes the role that Jane Jacobs played as a leading critic of the “modern movement” in architecture. She notes as well that “the need for development was situated within the socio-economic and political climate of the time” (Greaves 2011, p. 45). 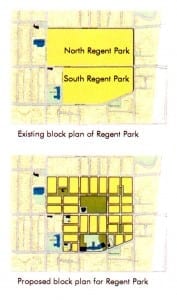 These views of Regent Park, showing the re-introduction of local street patterns, are from the Regent Park Revitalization Study (2002)

The Regent Park revitalization study (2002) offers a concise and comprehensive overview the history of Regent Park.

It describes the area as follows (p. 7):

“Regent Park is one of the largest and oldest public housing developments in Canada, housing approximately 7,500 residents in 2087 units over an area covering 28 hectares (69 acres). It is located at the eastern edge of downtown Toronto and was developed in two phases: north Regent Park, located between Dundas, Gerrard, River and Parliament Streets was built from 1948 and 1957; and south Regent Park, between Dundas, Shuter, River and Regent Streets was built between 1957 and 1959.”

With reference to the original development of Regent Park, the text notes:

“Regent Park represents an approach to public housing development rooted in the immediate post war period. The project was designed as a largely self-contained neighbourhood with no through traffic and units that look out onto open spaces. For the most part, it was designed with little reference to the surrounding neighbourhoods. It is primarily a residential area with a community centre and health centre added years after the original development had been completed. Retail, institutional and employment uses were not included as part of the original design.”

“The buildings include some high-rise apartment blocks and two storey townhouses south of Dundas Street and low rise, three to six storey walk up apartments and townhouses north of Duidas Street. They appear to be structurally sound, but have become dysfunctional for a variety of reasons. The design of the development and the individual buildings has increased the sense of isolation in the neighbourhood and created spaces for crime and vandalism.”

The topic of crime can be discussed from other vantage points as well, including military history.

The early history of Regent Park’s brings to mind Ken Greenberg’s overview of the history of the “modern movement” in architecture.

Greenberg notes that in the aftermath of the European Industrial Revolution, which gave rise to deplorable living conditions in industrial cities, a “modern movement” in architecture emerged.

The modern movement was motivated by what Greenberg calls (Walking home, 2011, p. 22) “a sincere humanist urge” to address the substandard housing, overcrowding, pollution, noise, soot, disease, and other features of industrial cities that emerged after the Industrial Revolution.

The modern movement was based on the premise that the methodical logic that had successfully applied inventive engineering to industry could also be applied to how people lived their lives.

In effect, the city would be treated like an enormous machine. The early modernists believed the primary roles of a city can be identified, in the same way the mechanical operations of industrial processes can be identified. The belief was that after the roles are identified, they can be simplified, separated, and made to work more efficiently.

In a proposed scenario advanced by prewar and postwar modernist architects, people would be housed in “towers in the park” – high, widely spaced apartment blocks, with lots of green space surrounding individual buildings. Work would be performed in modern factories and offices. Recreation would take place in sports complexes. Cars would move people between zones. Greenbelts would separate the zones.

In the 1930s the modernist movement in architecture called for refashioning of cities into independent zones, each separately dedicated to dwelling, work, recreation, and transportation.

In the interest of minimizing “friction” and maximizing “efficiency” in what was called the Functional City, there was to be no mixing of zones or of functions. The application of these principles gave rise to large numbers of postwar “urban renewal”  projects based on slum clearance and redevelopment.

The Regent Plan revitalization study (2002, p. 9) provides the following details regarding how Regent Park originally came into being:

“Prior to the development of Regent Park in 1948, city officials considered the area a slum. It was integrated with the surrounding city fabric through a network of streets and dominated by row houses lining the edges of rectangular blocks with little open space, trees or community facilities. The development of Regent Park north in 1948 was intended to replace the squalor of the neighbourhood with a modern, car free spacious and pleasant environment inspired by Ebenezer Howard’s Garden City movement from the U.K.

“The Housing Authority of Toronto built it over a ten-year period following a referendum in 1947, which approved the expenditure of funds for the project with financing primarily from City tax revenues and debenture funding. There was minimal financial support from the federal government and only legislative support from the provincial government.

“The architect for the development was J.E. Hoare who designed the superblock development with a series of three and six storey walk-ups and a number of townhouses in a park like setting. The units had modern plumbing and appliances and were an instant success with the residents who moved in. The first residents consisted of the ‘working poor’ and had generally moved from the housing that had been displaced in the neighbourhood. About 20% of the original residents had been homeowners prior to moving into Regent Park.”

Regent Park south of Dundas Street was initiated in the late 1950s “as a classic slum clearance project with the removal of all the previous residents and the demolition of all the buildings on the site prior to construction. Peter Dickenson of Page and Steele architects designed the project as a series of five high-rises mixed with ground related townhouses. His inspiration for double storey units in the high rises, with corridors on every second floor, appeared to be Le Corbousier’s design of a similar structure in Marseilles. The project won a Massey Award for Architecture, but proved unpopular with tenants” (p. 10). 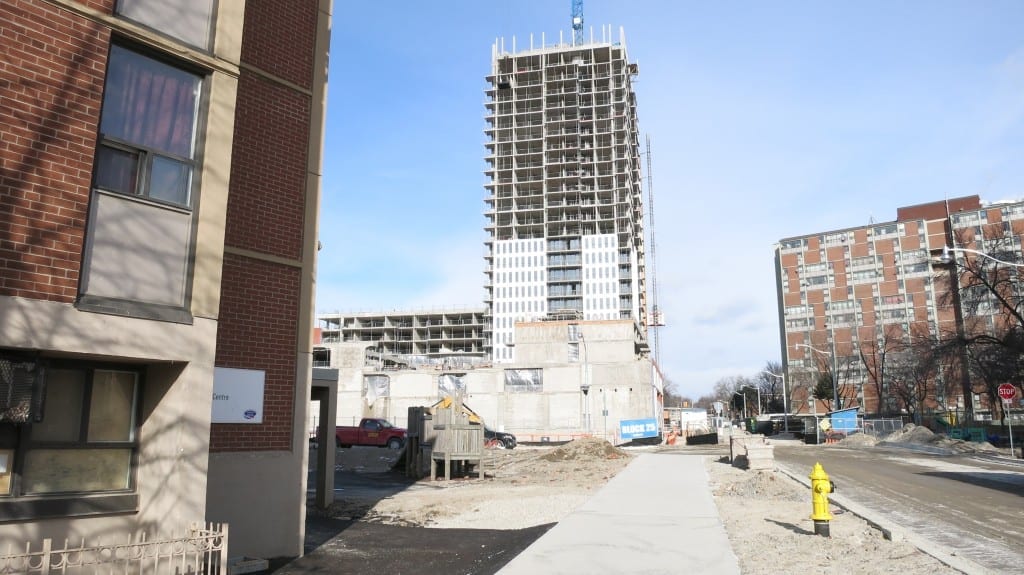 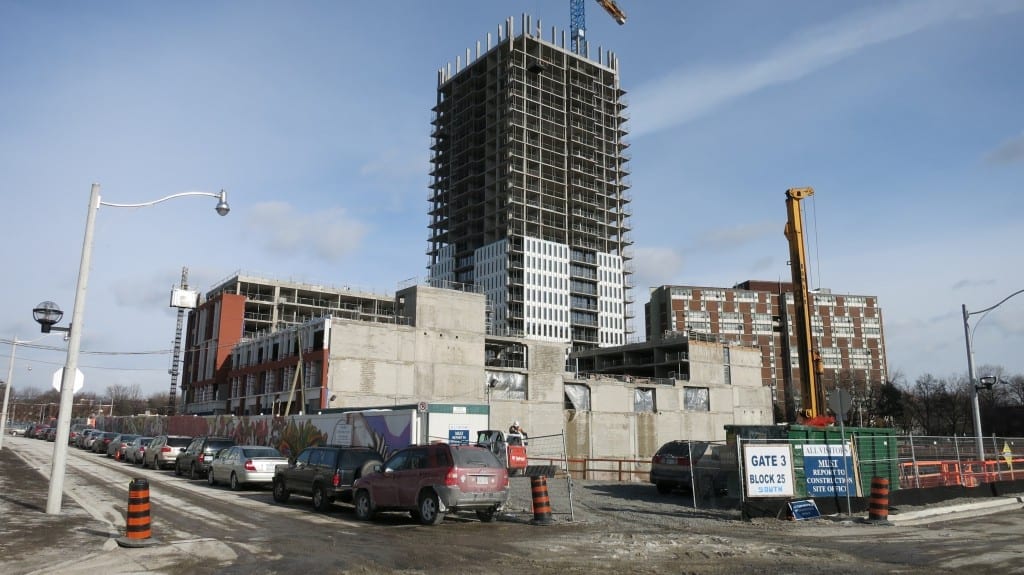 The Regent Plan revitalization study (2002) provides the following outline (p. 1) of next steps for the community:

“This report proposes a strategy for the revitalization of Regent Park. It shows that it is possible to reintegrate this neighbourhood with the rest of the City by introducing streets, creating large new park spaces, aligning buildings along the streets and providing opportunities for employment, education, culture and community facilities. It proposes that a mixed income, mixed use neighbourhood with a diversity of building forms and activities replace the current Regent Park. The report shows that this is feasible and presents a financial analysis of the findings.” 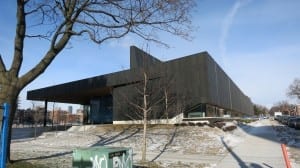 The new Regent Park Aquatic Centre, one of many new construction projects in the neighbourhood, has received a positive review in this Sept. 14, 2012 article in The Globe and Mail.

In the article, Lisa Rochon comments:

“A muscular body of transparency and tolerance, the Aquatic Centre, clad in strips of cedar and panels of black zinc, communicates like a beacon of enlightened change within Regent Park, the 69-acre (28-hectare) experiment in postwar social housing that achieved punishing isolation and is now being rebuilt and seamlessly integrated into Toronto’s east-central housing market.”

The Regent Park revitalization study (2002) was prepared by:

Further discussion about Regent Park can be found at an earlier blog post about the above-noted documentaries. News reports, such as this Feb. 8, 2013 Toronto Star article, regarding repair probes and similar topics, are part of a narrative related to the Toronto Community Housing Corp. The wider topic of the intellectual history of urban planning and design is featured at another blog post.