A Jan. 9, 2020 Forbes article is entitled: “The Age Of Virtual Reality Tourism Is Fast Approaching.”

Virtual reality and tourism are made for each other. For as long as commercial tourism has existed, it has been a primitive form of VR. In its most popular form, it involves “tourists” (as opposed to travellers or migrants) being shepherded around carefully curated landmarks, landmarks which bear only a fading historical connection to the nations in which they’re physically located. In other words, tourists mostly see heavily managed, artificial environments, rather than the environments in which a nation’s people live, work, play, and evolve.

Likewise, virtual reality involves placing people in heavily managed, artificial environments. As such, it comes as no surprise to learn that the travel industry and various tech companies are increasingly experimenting with ways to use VR to give people the same basic experience of tourism.

A May 21, 2020 Architectural Review article is entitled: “Outrage: the ecotourism hoax: Ecotourism can do more harm than good, but rethinking profit-driven tourism helps fight the climate crisis.”

Also of interest regarding tourism (then and now):

The text that follows was written some years before we moved to Stratford.

Reality tourism does not need to be restricted to visits by affluent tourists to impoverished slums. Why should slums have a monopoly over reality?

Any place you visit including a room in your house entails reality tourism.

My form of reality tourism includes walks in Lakeview and Long Branch.

At times I travel outside of Canada. 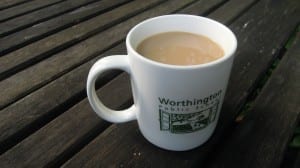 I enjoy visiting Mimico because I can stop at the Birds and Beans Cafe, where I can buy date-stamped coffee beans.

Mimico, a community with a contested eastern boundary, has been shaped into a triangle as a result of the configuration of Lake Ontario in that part of Toronto. It makes for interesting street patterns, which makes for interesting streets, which in turn makes for an entertaining local ambience. In Long Branch, the street patterns are similarly influenced by the configuration of the shoreline of Lake Ontario. It’s remarkable what a powerful impact the shoreline of a body of water can have upon us.

I’ve learned things, by overhearing conversations at the above-noted coffee shop. That experience has taught me to take care, regarding where I meet with people, when discussing topics of interest related to development issues in south Etobicoke.

In Long Branch, the roadways tend more toward perpendicular intersections, particularly at Lake Shore Blvd. West, than is the case in Mimico. These are the kinds of things I notice as I travel in the south Etobicoke (Toronto) and Lakeview (Mississauga) communities on the shoreline of Lake Ontario.

As is noted at the link that you can access at the previous paragraph, the City of Toronto and the City of Mississauga have developed decidedly different policies regarding the building of tall condominiums on the Lake Ontario shoreline. In Mississauga, the policy is: No tall towers on the waterfront. In Toronto, the policy is evident to any person who cares to observe the shoreline.

[July 2019 update: The “no tall condos on the lake” meme in Mississauga may have had its day. We’ll see in a few years hence.]

At Birds and Beans in Mimico, which I travel to by car, I can buy the coffee beans and know, by reading the labels – which I assume are accurate – when the beans were roasted. In order to brew a good quality cup of coffee, as I’ve learned from extensive reading, it’s best to start with a freshly roasted supply of beans.

As a reality tourist, I also enjoy reading about the ethics and anthropology of tourism. That involves, among other things, a study of brands and branding, and the world history of tourism and travel. It also entails an understanding of my own role and motivations as a tourist. Two studies related to this topic are entitled Displacing Desire (2006) and The Ethics of Sightseeing (2011). A third study that interests me is entitled Canadian Battlefields 1915-1918: A Visitor’s Guide (2011).

The blurb for Displacing Desire (2006) at the Toronto Public Library website reads:

In a half-dozen penetrating chapters, anthropologist Notar (Trinity College, CT) examines the relationship between cultural representations and physical transformation in this superb ethnography of place – specifically, the town and district of Dali in southwest China. Dali can be conceptualized as an exoticized borderland, a “site of desire” that in myriad complex ways has been reconfigured to satisfy the experiential needs of a sequence of visitors. It first attracted Western backpackers seeking off-the-beaten-track authenticity, followed by a much larger wave of metropolitan Chinese tourists attracted to Dali as the setting of an old Cultural Revolution movie and the chance to engage in ethnic cross-dressing. Most recently, the whole district has been radically altered to fit the plot of a totally imaginary martial arts novel. In 2004, the new model Dali hosted almost a half-million visitors, more than three times the population of town and hinterland. While younger townspeople in particular have welcomed many of these changes, Notar discusses a growing tendency to “talk back” and subvert official justifications for development. Besides the valuable contributions that this book makes to the literature on representation, popular culture, and tourism, it offers fascinating insights on a growing Chinese consumer society. Summing Up: Highly recommended. All levels/libraries. O. Pi-Sunyer University of Massachusetts at Amherst

The blurb for The Ethics of Sightseeing (2011) at the Toronto Public Library website reads:

Is travel inherently beneficial to human character? Does it automatically educate and enlighten while also promoting tolerance, peace, and understanding? In this challenging book, Dean MacCannell identifies and overcomes common obstacles to ethical sightseeing. Through his unique combination of personal observation and in-depth scholarship, MacCannell ventures into specific tourist destinations and attractions: “picturesque” rural and natural landscapes, “hip” urban scenes, historic locations of tragic events, Disney theme parks, beaches, and travel poster ideals. He shows how strategies intended to attract tourists carry unintended consequences when they migrate to other domains of life and reappear as “staged authenticity.” Demonstrating each act of sightseeing as an ethical test, the book shows how tourists can realize the productive potential of their travel desires, penetrate the collective unconscious, and gain character, insight, and connection to the world.

Blurbs, and brands and branding, appear to involve the same means of communications:

The future of the book is the blurb, McLuhan said

Blurbs define us and tell us who we are

An additional blurb, from the Toronto Public Library website, comes to mind – from Canadian Battlefields 1915-1918: A Visitor’s Guide (2011):

Most of the world remembers the First World War as a time when, as historian Samuel Hynes put it, “innocent young men, their heads full of high abstractions like Honour, Glory, and England … were slaughtered in stupid battles planned by stupid Generals.” English-speaking Canadians have for the most part accepted this view and supplemented it with an imaginative version of a war in which their soldiers won great victories and forged a new national identity. Both approaches have served to promote literary, political, and cultural agendas of such power that empirical studies of actual wartime events have had little impact on the historiography. A new generation of scholars has challenged those approaches, however, insisting that the reality of the war and the society that produced it are worthy of study.

This guide to the Canadian battlefields in France and Belgium offers a brief critical history of the war and of Canada’s contribution, drawing attention to the best recent books on the subject. It focuses on the Ypres Salient, Passchendaele, Vimy, and the “Hundred Day”s battles and considers lesser-known battlefields as well. Battle maps, contemporary maps, photographs, war art, and tourist information enhance the reader experience.

By way of an update, the above-noted blurb brings to mind Recasting History (2019), a study that I’ve addressed at two previous posts:

Canadian Literature (a quarterly) highlights “Recasting History: How CBC Television Has Shaped Canada’s Past” (2019); at this post I also discuss Peter Watkins’ take on film language

Video conferencing can be exhausting

An April 22, 2020 BBC article, of relevance in the context of physical distancing, is entitled: “The reason Zoom calls drain your energy.”

I mention this article because Zoom offers us another form of reality tourism, with attendant productivity as well as strains. An excerpt from the above-noted article reads:

Silence is another challenge, he adds. “Silence creates a natural rhythm in a real-life conversation. However, when it happens in a video call, you became anxious about the technology.” It also makes people uncomfortable. One 2014 study by German academics showed that delays on phone or conferencing systems shaped our views of people negatively: even delays of 1.2 seconds made people perceive the responder as less friendly or focused.

A May 9, 2020 CBC article is entitled: “Feeling extra tired after a day of video chatting? A St. John’s psychologist says you’re not alone: ‘Zoom fatigue’ can lead to other issues like anxiety, Dr. Janine Hubbard says.”

Though research into Zoom fatigue is still in the early stages, Hubbard said the exhaustion people are experiencing can be attributed to what she calls “a different kind of focus and attention.”

“We do not normally stare directly with intense eye contact into our colleagues, or even our loved ones, for an hour at a time,” she said.

“We’re also not used to being on camera, and we are so focused at looking at ourselves, no matter how much we try to resist it.”

A May 21, 2020 Globe and Mail article is entitled: “‘Zoom fatigue’: Here’s why videoconferencing leaves you feeling tired.”

Alicia Jenelle feels drained these days, and she believes videoconferencing is to blame. Since the pandemic, Ms. Jenelle, who leads a Toronto event planning firm, has replaced all her work chats, coffee dates and lunch appointments with virtual meetings over Zoom, Cisco Webex and Microsoft Teams.

Spending time on Zoom all day, a practice akin to virtual reality tourism, is exhausting for reasons being studied by researchers.

In the end, the gold standard is live music, live dance, live theatre, and live face to face conversations and meetings.

In the meantime, videos of Stratford Festival plays, and Zoom role plays in varied contexts, are among the ways in which we can enjoy video experiences with perhaps less of the fatigue that is associated with standard interactive Zoom video conferencing.

Zoom conferencing is a form of virtual reality tourism. We visit other people’s places by means of a screen. The experiences are curated by the medium of the video conferencing software platform.

The context curates our experiences.

Our past formative experiences curate our perception of the present moment.

Our experience of history is curated by the producers of public history. However, our perception of such productions will depend on our past formative experiences.

Recasting History (2019) offers an overview of Canadian history as curated for CBC television viewers over the years – first by historians, later by journalists (including investigative reporters) who claim to have a better grasp of history than historians. As Monica MacDonald notes, however, such a form of curation is in turn conditioned by market forces and federal cultural policies affecting the CBC and other broadcasters. This is an awesome book. I recommend it strongly!

Message from Peter Milczyn, MPP for Etobicoke-Lakeshore Virtual Unreality: Just Because the Internet Told You, How Do You Know It’s...
Scroll to top