At this post I will speak about how, after reading about Tyrone Guthrie’s radio drama work in Canada in the early 1930s, I became interested in the early history of the Canadian Broadcasting Corporation (CBC). That interest led me to a book by Monica MacDonald entitled Recasting History: How CBC Television Has Shaped Canada’s Past (2019).

For the current post, I will introduce the book and describe how I came across it. Had I not been reading about Tyrone Guthrie’s radio work in Canada before the CBC was created, I don’t know if I would ever have come across MacDonald’s study.

From May 2019 until January 2020 I’ve been writing drafts of a 950-word article about Stratford, Ontario as a cultural tourism destination. During this time, I’ve read widely about Stratford’s history. 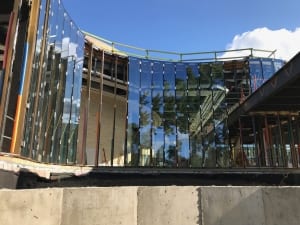 The article appears in the Spring 2020 Acorn Magazine of Architectural Conservancy Ontario (ACO).

In writing the article, I’ve condensed several months of research including interviews into a brief text. I’ve benefitted from feedback from several readers, including the editor of the ACO’s Acorn Magazine, with whom I shared early drafts of the article.

In researching the history of Stratford, I’ve read many standard sources related to launch of the Stratford Festival in 1953.

In my reading, I’ve encountered a wide range of fact-based accounts of Stratford Festival history. I’ve also come across accounts where, on occasion, opinion takes precedence over facts.

The local history of a small North American city such as Stratford is embedded in history on a wider scale – including military history, Indigenous history, and settler colonial history.

As well, when we seek to make sense of the story of such a city, many disciplines and conceptual frameworks can be accessed. Among frames of reference that come to mind are ones involving communication, culture, literature, economics, political science, linguistic anthropology, land use planning, and Indigenous studies. 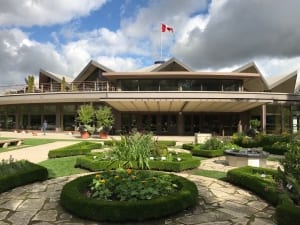 The Festival Theatre, designed by architect Robert Fairfield in close consultation with the Stratford Festival board of directors and theatre staff, was awarded the Vincent Massey Gold Medal for Architecture in 1958. The theatre features a thrust stage. Jaan Pill photo

The quality of research and writing about Stratford history is variable.

The quality has to do with resources (including sufficient time as well as human capital and social capital) available for a given team of people (inside or outside of academic settings) engaged with a writing project.

Also of relevance are expectations and perspicacity (capacity for discernment or insight) of the intended readership.

Highly informative books or articles by Tyrone Guthrie, Monica MacDonald, Howard Fink, and Peter Watkins are among the many texts I have encountered, in reading about history, theatre, and processes – such as ones related to the Stratford Festival – by which we seek to make sense of things.

At the current post, I want to share the fact I’m really pleased that, in a roundabout way, my readings have led me to a close study of Recasting History: How CBC Television Has Shaped Canada’s Past (2019) by Monica MacDonald.

In the Spring 2020 Architectural Conservancy Ontario Acorn newsletter article, which I worked on from May 2019 until January 2020, I describe the launch of what is now North America’s largest repertory theatre:

The Stratford Festival began with a suitably spectacular opening performance under a huge theatrical tent, raised at the edge of an impressive park system along the Avon River – populated then as now by swans, ducks, and geese – sixty-seven years ago.

The story of how the Stratford Festival, North America’s largest repertory theatre, now bringing over 500,00 visitors a year to Stratford, began at the Festival Theatre on July 13, 1953 – with a stunning evening performance of Richard III, starring Alex Guinness in the title role – has been frequently told.

In Fifty Seasons at Stratford (2002), Robert Cushman describes the moment when the performance ended: “The Canadian response was bemused – but ecstatic. A first-night standing ovation (not the automatic event it is now) lasted five minutes: an eternity in theatre time. Everybody knew that history had been made.” 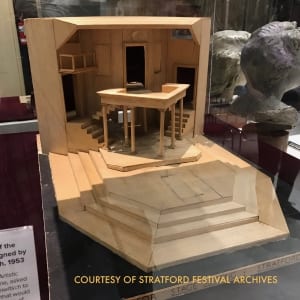 Original model of the Festival thrust stage, a new variant on a centuries-old idea, designed by Tanya Moiseiwitsch in consultation with Tyrone Guthrie, 1953. Though Moiseiwitsch’s stage has been modified a few times since its original incarnation, its basic architecture remains the same today. Photo courtesy of Stratford Festival Archives

Tyrone Guthrie served as artistic director during planning and launch of the Stratford Festival.

Early in his career as a leading British theatre director, Guthrie was involved during the 1920s – at the beginning of British radio – in directing radio drama for the British Broadcasting Corporation (BBC).

As well, he worked in Canada in the early 1930s – at the beginning of Canadian radio – as director and producer of radio drama focusing on Canadian history.

Guthrie’s work in Stratford in the early 1950s was his second time, that is, working in Canada.

In the early 1930s during his first stay in North America, he produced and directed a Romance of Canada documentary drama series for the Canadian National Railway Radio Department. The CNR’s pioneering national radio network was a stepping stone for the subsequent launch of the Canadian Broadcasting Corporation.

An article by Howard Fink, entitled “Beyond Naturalism: Tyrone Guthrie’s Radio Theatre and the Stage Production of Shakespeare,” (1981), describes how, even then, Tyrone was developing a rationale for a thrust stage design for classical theatre.

The full citation for the article reads:

The Edinburgh Assembly Hall was, after all this, yet another makeshift; the full realization of Guthrie’s vision of Shakespeare production had to wait on yet another invitation from Canada. Once again, he was asked to take full creative control of a theatre, this time at Stratford, Ontario. Guthrie’s first efforts in 1931 had materially aided the decision to create a Canadian national broadcasting network. This in turn, by the forties, had fostered a Canadian national theatre which owed much to Rupert Caplan, whom Guthrie himself had trained in radio drama. Caplan had by this time been joined by an impressive second generation of radio-drama producers, Esse Ljungh, Frank Willis, and especially Andrew Allan, the Supervisor of CBC Radio Drama from 1944 until the mid-fifties. [14] Now Guthrie would return to create our second and ‘legitimate’ national theatre. And he would benefit in turn from the seeds he had sown in 1931; for many of the theatre personnel at Stratford in the early years had gained most of their professional experience in that same CBC Drama Department of Allan and Caplan. Caplan and Dora Mavor Moore ensured Guthrie’s access to this extraordinary pool of talent.

The Spring 2020 Architectural Conservancy Ontario newsletter article about Stratford as Canada’s cultural tourism destination refers to the role of the thrust stage in launch of the Stratford Festival:

[Toronto architect Robert] Fairfield also preserved the centrality of the thrust stage by ensuring the stage’s centre pillar would be at the very centre of the new building. The thrust stage design, with the audience seated on three sides of it, fosters intimacy between actors and audience, requires minimal scenery, and enables quick and effortless scene changes. With good seats available in a wide arc around the stage, the design also maximizes ticket revenue. 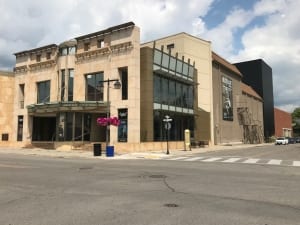 Recasting History: How CBC Television Has Shaped Canada’s Past (2019) is an exemplary study of how CBC television has shaped public history in Canada. MacDonald’s research and analysis is highly original, timely, and breathtaking in its scope, focus, and clarity. I am very pleased indeed that I – quite unexpectedly – came across this study, which is available at the St. Marys Public Library.

It was as a result of reading Fink’s article that I became interested in reading about the history of the CBC. Without having such an interest, it’s unlikely I would have learned about Monica MacDonald’s study.

I will conclude with a blurb (to which I have added links) from the back cover of Recasting History (2019):

Monica MacDonald takes us behind the scenes of the major documentaries and docudramas broadcast on the CBC, including in Explorations (1956-64) and the series Images of Canada (1972- 76 ), The National Dream (1974), The Valour and the Horror (1992), and Canada: A People’s History (2000-02). Drawing on a wide range of sources, MacDonald explores how producers struggled to represent the Canadian past under a range of external and internal pressures. Despite dramatic shifts in the writing of history over this period, she determines that television themes and interpretations largely remained the same. The greater change was in their production and presentation, particularly in the role of professional historians, as journalists emerged not only as the new producers of Canadian history on CBC television, but also as the new content authorities.

A critique of public history through the lens of political economy, Recasting History reveals the conflicts, compromises, and controversies that have shaped the CBC version of the Canadian past.

“Recasting History is a well-researched study that makes a valuable and original contribution to Canadian history. MacDonald weaves exposition and analysis, each informing the other, with clear and detailed prose.”

Monica MacDonald is a specialist in public history and holds a PhD in communication and culture from York University.