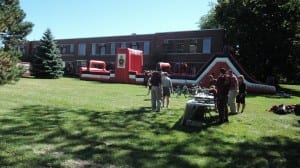 The events at the Small Arms building on Sept. 7, 2014 included a display of machine guns and the opportunity to handle the weapons and learn how they worked. In the background is a bouncy castle, which was set up as a timed competition between two opponents. The winner was the person who got across the "obstacle course" in the shortest period of time. Jaan Pill photo

I enjoyed the opportunity to take in many of the events at the Small Arms building on Sept. 7, 2014 in connection with the 100th anniversary of the Princess Patricia’s Light Infantry Regiment.

A Sept. 7, 2014 Globe and Mail article, entitled “Adrienne Clarkson commemorates contributions of Canadian soldier,” provides a good overview of the day’s events at settings across the Greater Toronto Area.

“The man who commanded the storied Princess Patricia’s Canadian Light Infantry for part of the First World War created an unsurpassed record of life at the front lines through his letters to his wife, said former governor-general Adrienne Clarkson in celebrating the contributions of Agar Adamson at a ceremony on Sunday.

“Lieutenant-Colonel Adamson, part of a prominent Ontario family, was honoured at memorial plaque dedications in Mississauga as part of the Princess Pats’ trek from Edmonton to Ottawa to mark their centennial as well as the 100th anniversary of the Great War. 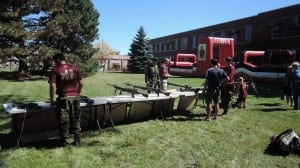 The Sept. 7, 2014 events at the Small Arms building, in celebration of the 100th anniversary of the Princess Patricia's Canadian Light Infantry Regiment, included an extensive series of displays - visible in the background of this photo - depicting the history of the regiment. Jaan Pill photo

“The colourful former civil servant, who was nearly blind in one eye and enlisted at age 48, was commanding officer of the Princess Patricia’s Canadian Light Infantry for nearly two years, leading the regiment during the battles of Vimy Ridge and Passchendaele. All the while, he sent near-daily letters to his wife Mabel that his son eventually found stashed in an attic and were later published.”

The article refers to “delayed shell shock” experienced by Agar Adamson. That reference tells me so much more about him than what I have read when I have read an information display at the Adamson Estate, where the back story of the estate is highlighted.

Other terms come to mind including “battle exhaustion,” “shell shock,” and “combat stress.”

In some cases, First World War soldiers were executed – shot at dawn – after exhibiting symptoms of shell shock, and received posthumous formal pardons well over half a century later later when better understanding had emerged of what battle stress entails.

Among the Canadian historians who have explored battle exhaustion in depth is Terry Copp, whose work I have highlighted in previous posts, including a recent post.

“The field of psychiatric studies exploded during World War II because of an influx of traumatized soldiers. War is a kind of grand opening for studies of the mind. Historically, interest in trauma studies rises sharply during wartime, then wanes in its aftermath. But this time, even as the wars in Iraq and Afghanistan recede from public attention, rates of post-traumatic stress disorder have continued to increase. PTSD is currently the fourth-most-common psychiatric disorder in America.” 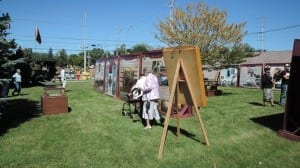 Sept. 7, 2014 at Small Arms building looking north toward Lakeshore Road East at Dixie Road. A large number of panels were set up displaying the history of the Princess Patricia's over the past 100 years. Jaan Pill photo

We are very pleased to be in touch with Charles Tsiang (MCHS 1962) regarding... Heart and Stroke Foundation urges limits to sugar intake – Sept. 9, 2014...
Scroll to top