Graeme Decarie has a question about the old Bois Franc. Do you know the answer?

We’ve had some additional recent comments at the following posts:

Graeme Decarie taught grades 7 to 11 for six years. Loved it. Then went back to school for his MA at Acadia & PhD (History) at Queen’s

We also have a new photo (below on the right; please see comments at the end of this post). Stephanie Brochocki writes (Aug. 14, 2022): “Despite my young age (1-2) at the time, I have very fond memories of Bois Franc. Here are two photos. Unfortunately it shows very little of the dear old house, but you can catch a glimpse of Bois Franc in the background.” 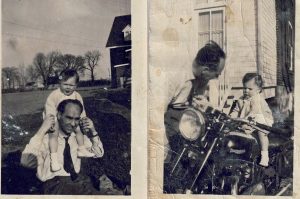 Stephanie Brochocki writes (Aug. 14, 2022): “Despite my young age (1-2) at the time, I have very fond memories of Bois Franc. Here are two photos. Unfortunately it shows very little of the dear old house, but you can catch a glimpse of Bois Franc in the background.” Bois Franc today. We owe thanks to Tim Hewlings (MCHS ’63) for sending along this map. The source is Google Earth.

Back in the haze of memory, I recall an area called Bois Franc where my father would take me hiking. I’m not sure whether that was in the Cartierville-Saraguay area that we were talking of earlier or in Ahuntsic.

And I well remember Bob Carswell from my YMCA days when I was assigned to a youth group at Cartierville school. He drove me crazy with constant demands that we play some game called “buck-buck”.

I am hopelessly confused. I’ve been looking at a recent map of Ahuntsic to Saraguay. And I can’t figure it out. There is a Bois Franc on the map. but it seems to be right on the border of the old airport. And it seems very small. The bois that I hiked in as a kid was much bigger, and a bit further to the north and west. So that small bois may be all that is left of Bois Franc. Or, it may be that a much larger woodland now called bois-de-liesse is a renamed remnant of the old Bois Franc.

A street called Noorduyn runs along what I think was the north end of the airport where the Noorduyn factory was, right at the intersection with Cure Labelle.

Also on Cure Labelle and across the street from Belmont Park, was a great shack selling hot dogs and fries. Loved it.

[End of comments from Graeme Decarie]