The problems Saint Johns faces are not unique. As a Dec. 10, 2018 Brookings article, entitled “3 big societal problems to fix in 2019,” underlines, the problems facing cities are much the same everywhere. The article was originally published by the World Economic Forum.

In my recent reading about Saint John, a city that I’ve much enjoyed visiting, I’ve found that the Acadiensis history blog offers a great way to get acquainted with relevant issues affecting Saint John and New Brunswick.

As a result of reading posts at the Acadiensis website, I’ve gained a better understanding of Saint John.

As a July 27, 2015 post, entitled “Welcome to the Acadiensis Blog,” notes,  an ongoing challenge for Atlantic Canadian Studies is regional marginalization.

An excerpt from the opening paragraph at the above-noted post reads:

The problems of regional marginalization that prompted some of the pioneers of Atlantic Canadian studies to found the journal Acadiensis in 1971, and that so many Atlantic Canadian scholars have since written about, seem in danger of filtering into the digital realm.

Among other posts of interest is a book review by Lisa Pasolli of New Brunswick before the Equal Opportunity Program: History through a Social Work Lens (Toronto: University of Toronto Press, 2018).

An excerpt from the review reads:

The strongest of these threads is the attention to the structures of “prejudice, paternalism, and colonialism” (79) that generated disadvantage and need. The first two chapters set the tone of the book by providing deep historical context of the peoples and economy of the province; as the authors point out, “in New Brunswick’s history lie all the ingredients for a recipe for disaster and hardship for entire communities” (8). We learn, for example, that Acadian children in institutional care were chronically underfunded throughout the 20th century, that the establishment of Children’s Aid Societies occurred much earlier in anglophone counties than elsewhere in the province, that the Mi’kmaq and Wolastoqiyik were routinely denied access to social services, and that state-provided “social care” in Indigenous communities was often about assimilation. 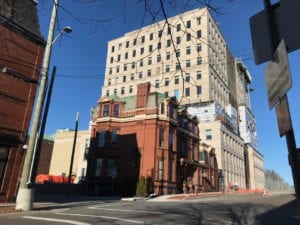 Growth fantasies and the shrinking city of Saint John

Of additional interest is a post by Gregory Marquis entitled: “Growth Fantasies and the Shrinking City: Researching the Saint John Experience.”

The post notes that “In 1867, Saint John was one of the top cities in the new Dominion of Canada” but that now a “continued trend towards a shrinking population” is evident.

An excerpt reads [I’ve changed the single quote-marks around community leaders to double quote-marks, in keeping with usage elsewhere at the Acadiensis website]:

Those who speak for the growth coalition become “community leaders.” Citizens who oppose or even question aspects of development can be excluded from the conversation. Outlets for oppositional voices are not enhanced by the fact that the powerful Irving interests enjoy a provincial monopoly in anglophone daily and weekly newspapers. Recently, for example, a former heritage planner who owned property in the area questioned why the municipality was changing its planning bylaws to accommodate a multi-story office building in the uptown core. The planned structure (now being built) was the new headquarters for Irving Oil. By speaking up, Jim Bezanson was vilified on social media for impeding Saint John’s progress and according to news reports was threatened with violence.[3]

This insular climate, which is fuelled by economic uncertainty, means that debates over development that are normal and expected in larger centres either never take place in Saint John or are much diluted. The result is not only a weakening of democracy, but a distorted vision of development that probably hurts the economy in the long run. Although the outlying suburban communities contain many of the best educated and most prosperous families in the province, the City of Saint John struggles to provide basic services to an aging, shrinking population. There is no magic bullet for these problems, but a blind faith in mega projects such as the much-hyped Energy East Pipeline, which would ship Alberta and Saskatchewan crude oil to a marine terminal (and possibly the Irving refinery) at Saint John, seems unlikely to reverse the city’s declining fortunes.[4]

Urban studies literature often explains that the media plays an important role in boosterism by supporting the politics of growth in general and specific initiatives and portraying coalition activists and organizations as “community leaders.” The flip side is that opponents or critics of development are ignored, criticized, and neutralized. And despite the rise of radio and television broadcasting, the metropolitan newspaper remained a powerful influence on urban affairs; at this time Saint John was home to two Irving-owned dailies, The Telegraph Journal and The Evening Times-Globe, which were consistent  promoters of pro-growth messages. This was accomplished through news reporting and editorials that promoted the growth agenda, although these dailies did not always agree with every project or every component of proposed and actual public and private sector developments [14].

A question that intrigues me is: “What’s the ideal population for a given city? Do cities need to be huge, in order to succeed?” I ask this question as a resident of Stratford, Ontario, population 32,000. A recent comment from a neighbour, which I paraphrase, comes to mind. “Stratford is just the right size for us,” the neighbour said. “It’s not too big, not too small.”

A related topic concerns how a given city should brand itself, in order to achieve prosperity in a neoliberal era. This topic is explored at length in a study entitled Small Cities, Big Issues: Reconceiving Community in a Neoliberal Era (2017). I bought this book at the Ryerson University Bookstore while we were staying at a lakeside cottage north of Peterborough in the summer of 2018. It’s a valuable book and warrants a close read.

A blurb [I’ve broken the longer text into shorter paragraphs] for the book reads:

Small Canadian cities confront serious social issues as a result of the neoliberal economic restructuring practiced by both federal and provincial governments since the 1980s. Drastic spending reductions and ongoing restraint in social assistance, income supports, and the provision of affordable housing, combined with the offloading of social responsibilities onto municipalities, has contributed to the generalization of social issues once chiefly associated with Canada’s largest urban centres.

As the investigations in this volume illustrate, while some communities responded to these issues with inclusionary and progressive actions others were more exclusionary and reactive – revealing forms of discrimination, exclusion, and “othering” in the implementation of practices and policies. Importantly, however their investigations reveal a broad range of responses to the social issues they face.

No matter the process and results of the proposed solutions, what the contributors uncovered were distinctive attributes of the small city as it struggles to confront increasingly complex social issues. If local governments accept a social agenda as part of its responsibilities, the contributors to Small Cities, Big Issues believe that small cities can succeed in reconceiving community based on the ideals of acceptance, accommodation, and inclusion.

High-quality decision making related to public policy – including in relation to urban planning – functions best when key decisions are the outcome of extensive debate, and have the benefit of extensive input, from citizens directly affected by decisions of this nature. I have had the good fortune to observe, and to be inspired by, community-driven outcomes that have arisen, under such conditions.

This topic warrants elaboration. The frame of reference that I will outline below serves as a heuristic device to aid my own further reading and anecdotal observations. This frame of reference functions as a generalization that serves as a starting point for articulation of a more precise and analytical view of land-use planning issues in a city such as Saint John, whose history I have been reading about with much interest.

Over the past couple of decades – and especially since I launched this website in 2012 – I’ve attended many public meetings and land-use hearings in the Greater Toronto Area.

Based on my anecdotal observations, reading, participation, and blogging, I’ve concluded that each city in the world has a characteristic culture of land-use decision making. The culture originates in particular historical circumstances, and is likely to change over time as circumstances, and dynamics of key power relationships, change.

What I’ve learned is not original. Many people have arrived at similar conclusions, in particular with regard to the use and distortion of language, a topic that I will outline below. Among writers who have addressed such topics is Aldous Huxley, whose observations about language usage related to accusations of demonic possession in early-1600s France I have highlighted at previous posts including:

In some cases, the culture of land-use decision making affirms the validity of standard language usage, where all parties to a conversation agree that words have standard meanings – for example that up means up and down means down.

Such a culture affirms the value of evidence-based practice in urban planning, and in communications regarding land-use issues.

Under such conditions, the rhetoric associated with a democratic society matches the reality, as manifested by what is observable by way of the outcomes of land-use planning decisions.

Two examples of how such standard-language decision making works come to mind.

One example concerns the community-driven project, initiated by the late Ward 1 Councillor Jim Tovey, to redevelop and reclaim the Lakeview waterfront in Mississauga.

Another illustration concerns the launch, initiated by the late Tom Patterson, of the Shakespeare Festival in Stratford starting in the early 1950s.

The above-noted initiatives are the topic of a recent post entitled:

A feature of such community-driven projects is that leadership succession can be built right into them, right from the start. Because their input is valued, citizens feel a strong sense of ownership of such projects. Under such conditions, as I’ve learned through my own anecdotal experience from the founding of several nonprofit organizations, it’s easy to make leadership succession part of the culture, right from the start.

Power speaks its own language, which in its own way is emotive, and is punctuated with characteristic force and vehemence

In some cases, however, the culture of decision making is such that at times power speaks its very own language – because it can.

Under such conditions, the culture manifests itself by asserting that big is small, up is down, and inside is outside.

Such a culture of language usage goes back far in world history. The history of colonialism, by way of example, features a category of land-use decision making – involving, among other things, irregular warfare associated with ethnic cleansing and genocide of Indigenous populations – wherein power speaks its own language, and explains itself, and defines reality – on its own terms.

Among other things, such language usage entails the destruction, distortion, and fabrication of evidence. It also gives rise to the writing of history, on the part of European settler societies, that is in many cases in close alignment with the language that power – at times; not invariably – speaks.

OTTAWA—The Telegraph-Journal in New Brunswick has been named the winner of the 2018 Michener Award, which honours excellence in public service journalism.

The Saint John-based newspaper was nominated for an 18-month investigation that exposed problems with New Brunswick’s ambulance service. The newspaper uncovered a severe shortage of paramedics that left ambulances sitting empty, leaving some people in emergency situations to be transported in regular vehicles.

A June 30, 2019 Washington Post article is entitled: “This Trump critic’s cartoon went viral on social media. Within hours, he no longer had a contract.”

“The Once and Future New Brunswick Free Press” (2010) outlines what... Photo from Ulrich Laska (MCHS 1963) of Walter Rhead, Kathleen Dawson, and Ulrich...
Scroll to top