Ian Roach has added a comment about Cartierville School in Montreal 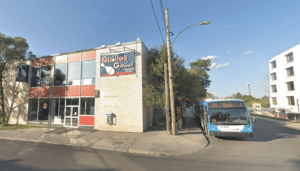 Screenshot from: 12246 Grenet St, Montreal, Quebec – Google Maps. The link is from March 10, 2019 comment, post at the page you are now reading, from Tim Hewlings of Montreal. Click on the image to enlarge it; click again to enlarge it further

In 1951 my parents bought a house in a new development on St. Germain Blvd. in Cartierville. The streets were still unfinished when we moved in and a stream called Raimbault Creek ran through our back yard. Behind it, there were fields that were owned by the order of nuns that operated the Sacre-Coeur Hospital. They must have kept animals because they used the fields for haying.

In the first couple of years we watched as new houses were built on the opposite side of the street, and later as another new street, St. Evariste was built behind us with more new homes. Eventually, the whole field was built over and had all but disappeared by about 1960.

The house on St. Germain remained our family home all the time I went to school and long after. My mother finally sold it in the fall of 1996 at age 81 and moved into a Seniors’ residence.

The railway track at the end of our street ran downtown. Monkland Station was on O’Brien Blvd., the next street over.

We used to play in the haystacks out in the fields behind our house. When we first moved there, the fields stretched all the way to the No. 17 streetcar track, about a half a kilometre away, and there were a couple of dirt roads that ran through them, at either end of our street. One was called Dudemaine and the other Jeanne (later changed to Louisbourg).

We also lived a stone’s throw from Cartierville Airport. Long gone, it is now a housing development. It was used mostly by Canadair, that eventually became Bombardier Aerospace. In the 50s, they were still building military aircraft at Canadair and there were regular flights of F-86 Sabre jets and T-33 trainers over our house, and later, the massive Argus submarine hunter.

When I first started Kindergarten, there were no Protestant schools in Cartierville at all. There was a new elementary school being built, but it was not ready in September, so we spent the first few months in a church basement in St. Laurent.

Our area was expanding rapidly as young families moved to the new suburb. They were building schools furiously for us baby boomers. They would overflow as fast as they could build them. Our whole gang went to five different Elementary schools – first Elmgrove, then Parkdale, both on Deguire St. in St. Laurent. The kids living North of Jeanne went to Cartierville School. Then, when we were in Grade 5, they opened Morison on Grenet, so all of us trooped off there. After a year, it needed expanding as well, so for the sixth grade, they bussed us all to Laurentide School on St. Louis, at the other end of St. Laurent. Back to Morison for Grade 7.

High School was no different. They were building one in our neighbourhood (Malcolm Campbell), but it was not ready by the time I was to enter 8th grade. Instead we had to take the train downtown to attend The High School of Montreal.

Hade’s Bicycle shop was on Lachapelle. My grandmother lived on Nelligan and we used to bike over there all the time. Always buying stuff to customize our bikes there.

On a side note, Allen Jones and I both had studio apartments on Nelligan in the 70s, when I went back to university. He had finished by then and was working for an ad agency.

Thanks for your very informative post, Tim. It appears that you’re a little older than I am, so I really enjoyed your historical perspective on my former stomping grounds. By the time I was an appropriate age, St. Germain and St. Evariste had been completed as far south as Dudemaine – although St. Evariste (maybe St. Germain also?) was subsequently lengthened – and both Morison and Malcolm Campbell were open.

With the passage of time, as would be expected, the entire area was further developed. A tour of the neighbourhood now would evoke feelings of nostalgia for the things that remain, but would also inspire reflection on the many changes that have occurred.

At that post, Don MacKenzie has added comments (March 8, 2019) as follows:

I attended Morison public school from 1957 to 1962. I also had Mr Bethel for gym. I remember waiting for gym and tossing one of my running shoes through the basketball net and getting caught in the net just as Mr Bethel came into the gym. I asked him about my running shoe and I learned a new word that day the word was confiscated. I did end up getting them back after a few days, I still thought he was a great gym teacher. Those years were the best time in my life. Cheers

Did you happen to know an Irene Lord or Brian Ito ? I also went to Morison School and had Mrs Wax in grade 5. I lived on Michel Sarrizan from 1958 to 1962. It was the best time of my life.

I also attended Morison ps between 1958 to 1962. I also had Mrs Wax for grade 5. I lived on Michel Sarrizan just across from the school. I have been trying to find some of my class mates, one being Irene Lord who lived in my apartment building. Other names I remember were Brian Ito. It was one of the best times In my life. Maybe we were in the same class. Cheers

I remember a student from those days whose last name was Ito. I also remember Mr. Bethel. He was a good gym teacher. I remember one time we had a baseball game (well, I think it was a baseball game). Students on opposing sides began to argue vehemently and loudly about some call, that had been made, regarding a recent play. Mr. Bethel listened to the arguing for a moment and said (and I paraphrase), “The game’s over. We’re not going to continue, under such conditions.”

I was in Morison Elementary in 1967/68. I lived in the dead end portion of Rue Bois Franc that stopped behind the Cartierville Airport (Canadair) on 5 acres, with stables and walked across the airfield later to get home. I don’t think the new Rue Henri Bourassa curves to the left after where the airfield used to end anymore going west, on the more southern road and the new one also now passes Cavendish to get to Pitfield. Its hard to find the old site now. It was farms and fields before where I bought from fruit stands. I got 2 big paper bags full of groceries including eggs for $3.00.

When I later got tired of taking a French school bus (in which we were the only English) to get to that first neighbourhood just before Peter Hall scool and a Tavern… with the grocery store & restaurant with machine on the counter (3 songs for .0.25.& always Mariam Makeba’s Pata Pata… and floats to drink), where I’d have to catch the city bus to MCHS, I moved to Sir Winston Churchill where I could cut across brussel sprout fields using tractor routes to forests & out to Cote Vertu. Sometimes I used my snowshoes which I still have & sometimes my bicycle.

The animal hospital I lived above… and that my mother & I worked for, rented the land from the airport, but when my mother had to move, it ended the era as both barn and the large stable burnt to the ground with horses by arsen as the others down the road did. The little man who worked there in with 32 horses and kennels if I wasnt there, just had his 65th birthday and received a 1 speed bike for his 65th birthday from his 5 sons. It was his 1st vehicle. He worked 12 hours plus a day plus took care of his wife on a wheelchair and the 5 sons. I was at a celebration of life a few weeks ago and found out the nephews and nieces of a horse boarder were among the relatives of my friend and were at the ranch/ farm. Their family lost one horse.

58 Wheatfield Road in Mimico – intention to designate under Ontario Heritage... Tim Hewlings has shared photos of our grade 6 class from Laurentide School and...
Scroll to top