To install a handrail, first locate the wall-studs; a YouTube video will show you how

We recently installed a handrail, along stairs leading to the second floor of our house in Stratford, Ontario.

I used a stud finder to locate the wall-studs, along the stairway wall.

If you want to install a handrail, naturally you want to make sure you will be securing it to some studs.

To make sure I knew how to proceed (this being the first time I’ve installed a handrail), I first checked a YouTube video to make sure I know how to use a stud finder correctly. 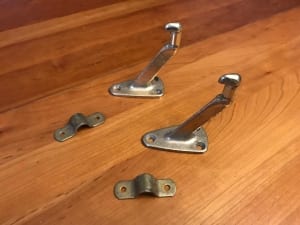 Original brackets for handrail, which had been stored in the basement. For the reinstalled handrail, we purchased a new set of brackets. Jaan Pill photo

I then attached two metal handrail brackets to the wall.

I used a vertical level to ensure the heights of the wall-brackets were measured accurately.

Once the brackets were installed, I used two fittings, which I had installed on the underside of the handrail, to secure the handrail to the wall.

When you take hold of the handrail, you can tell at once it’s very solid. It’s very satisfying to have such a sturdy handrail in place – something solid to lean on, as you travel up and down the stairs.

The house is over a century old. The handrail looks to be old as well, but whether it’s as old as the house, I do not know.

What I do know is that a handrail serves a useful purpose.

Besides serving a useful purpose, as you walk up and down the stairs, a handrail can also serve a useful figurative (in addition to literal) function. 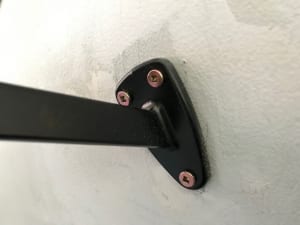 It can, that is, serve as a metaphor for many things in life, outside of the realm of stairs and houses.

A handrail can also serve, among other things, as a metaphor for things in life that are firmly secured into place, and that have clearly defined beginnings and endings.

A handrail is of finite length; you know exactly where it begins and ends.

That standard feature of a handrail brings to mind, in turn, situations where such a clear start and finish does not exist.

Part of the opening paragraph (p. 45) in Chapter Two of Jürgen Osterhammel’s above-noted study, of the nineteenth century, reads:

When was the nineteenth century? We speak of a century as if it were a self­ explanatory term, implying that everyone connects it with a precise, perhaps the same, meaning. What is it if not the time span that is contained between the years 1801 and 1900, for example? Yet that time span does not correspond to a tangible experience: the senses do not perceive when a new century begins, as they do the daily cycle or the seasons of the year. The century is a creature of the calendar, a calculated quantity, which was introduced for the first time in the 1500s. For historians it is, as John M. Roberts put it, “only a convenience.” [1] The less they believe in the “objective” coherence of an age, and the more they see dividing lines between epochs as pure convention, the fewer objections there can be to a sim­ple chronology that operates with chunks of a hundred years.

Given that I live in a country where the influence of British history is strong, I was also interested to read the following passage (p. 53; I have added a link to the text) focusing on Britain as an individual nation in Europe:

Whereas a particular national history still finds safety in a general consensus about its key dates, it becomes all the more difficult for Europe as a whole to agree on the epochal shifts of common importance. The political tra­jectory of Britain, for instance, where not even the Revolutions of 1848 played a major role, has been such that popular historians are not alone in using the term “Victorian” for the period between 1837 and 1901 – a term derived from the reign of a constitutional monarch. England experienced its profound politi­cal break considerably earlier, in the two revolutions of the seventeenth century, and the shock waves of the French Revolution after 1789 were by no means as powerful there as they were on the Continent. British history books today tend to situate the decisive turning point not in 1789 but in 1783 – the year when the North American colonies were finally lost – and therefore attach much less significance to 1800 than one commonly finds in France, Germany, or Poland. In Britain the passage from the eighteenth to the nineteenth century is less dra­matic, sidelining the rupture of the Napoleonic Wars that were fought on the other side of the Channel.

When we make our way through life, it’s great to have something to lean on. Sometimes we lean on experts, such as reputable historians, but that is not inevitably a requirement. I will conclude this post with a reference to Tyrone Guthrie, who was not a historian but has written much of interest about the history of theatre, as he encountered in during his highly productive and inspiring career as a theatrical director. He was a person who worked hard, all through his life, to ensure that things were securely fastened into place.

I very much like reading The Transformation of the World (2014). Along with A Life in the Theatre (1959) by Tyrone Guthrie, this is among my favourite reading books – among a large number of other books, that I’ve also found most valuable to read in recent months.

I have my own copy of Jürgen Osterhammel’s study; the books is Reference Only – Not Holdable at the Toronto Public Library. I became interested in reading it because I read a Guardian article about the book some years ago, which noted that Angela Merkel found the book of interest.

Guthrie’s professional memoir is also Reference Only at the Toronto Public Library but can be borrowed at the Stratford Public Library.

In July 2018 we sold our house in Long Branch; in October 2018 we moved to Stratford. As I’ve come to learn, the launch of the Stratford Festival in 1953 was a most inspiring achievement. On May 7, 2019 we saw a preview performance, beautifully and evocatively staged, of Othello at the Festival Theatre in Stratford; it was everything I expected such a Shakespearean performance to be. Othello serves as a wonderfully wrought, non-academic, dramatic thesis on the dynamics of deception.

In Tyrone Guthrie’s recollection, the most influential factor ensuring the successful launch of the Stratford Festival in the early fifties was its timeliness. Other key factors, noted by Guthrie among others, were the organizing committee; quality of the plays; construction of a thrust stage (as opposed to a standard proscenium stage); publicity by Mary Jolliffe; crucial financial resources that came through at just the right moments; and vision of Tom Patterson.

Like a handrail that is firmly fixed to the wall, the Stratford Festival, that is to say, has a very solid foundation – a solid physical and conceptual infrastructure, that is, where everything fits firmly into place – for which reason it has continued to grow and flourish, with the passing of the years.

Watch 2 time Canadian Champion Dancers Boris & Patricia perform at the... Evidence can (alas) be used as Iago uses it in Othello
Scroll to top