Click here for City of Toronto updates regarding Six Points >

Comment regarding this update: I’ve been following the Six Points story for many years. I have become more cynical with the passage of the years, with regard to the relationship between planners and residents at the City of Toronto.

My anecdotal  impressions, which I have shared at past posts, is that for reasons having to do with local history and other variables, the relationship between planners and residents on the whole works better at the City of Mississauga. This is evidenced in the redevelopment processes underway in Lakeview and in Port Credit.

That said, what happens in Toronto matters hugely, given its size, energy, and diversity. I strongly support efforts by Pamela Gough, Jennifer Keesmaat, and others to find a way to make Toronto a better place to live, through first-rate planning initiatives that actually take into account the views and interests of everyday residents. 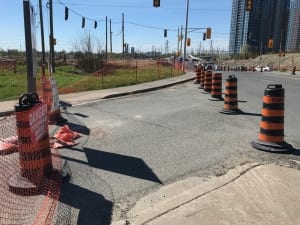 An excerpt from the above-noted article, reads:

The Design Review Panel were presented with an update of the project, and were asked to give feedback on the public realm and future development of the area. This was the second review of the project by the Panel, but since the first review was back in 2014, many Panel members were not on the DRP at that point and were seeing this for the first time.

While they were happy that the interchange was coming down in favour of an at-grade street network, the Panel was not overly pleased with the plans in place, or lack thereof, for the Six Points neighbourhood. They took issue with the design of the new Dundas Street, stating that the street was too wide. Though Dundas now incorporates wide sidewalks, elevated bike lanes, street trees, and a landscaped median, Panelists criticized the excessive width of the six-lane road, claiming that despite these urban elements, the new Dundas was designed as a highway conducive to speedy traffic that would create a hostile environment for pedestrians and cyclists. They acknowledged, however, that since the project was nearly complete, there was not much that could be done about this.

Panel members were also displeased with the lack of a clear holistic vision for the neighbourhood. They criticized the recent development in the extended area as being more like a “tower-in-the-park typology, a continuation of a suburban model that hasn’t really worked so well”. They described the nearby high-rise developments as “inward-looking”, and “a collection of islands…buildings in isolation with no connection between, and each with its own internal street network”. While the reconfiguration of the Six Points area helps to urbanize the heart of the Etobicoke Centre area, unifying elements that will create a true neighbourhood are lacking.

Panel members suggested that a continuous streetwall or a continuous public realm of connected green spaces could help to mitigate the suburban feel of isolation. Neither are apparent in the City’s proposed plans. The City did present a rough concept for a linear connection of green spaces along Dundas, but Panel members were unconvinced, and acknowledged that the current zoning might not encourage that to happen.

A post at the SvN website (also a non-secure http as opposed to https site) is entitled “Six Points Interchange.” 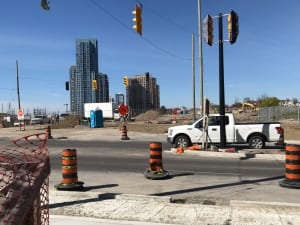 One particular corner of the site, which I had often visited in the past to record the preliminary work, is now totally transformed. It’s hard to recognize unless a person looks at particular details, here and there, that remain in place from a previous time. Jaan Pill photo 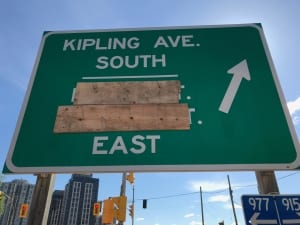 “[Six Points] should be seen as a precedent-setting plan that reclaims city streets from being treated as highways and reimagines them as functional and engaging public realm amenities.”
– City of Toronto Urban Design Award Jury

The design transforms the freeway-style “spaghetti junction” at the convergence of Dundas St. W, Kipling Ave., and Bloor St. W. into three pedestrian friendly at-grade intersections and a network of new streets. This major city development project is not only the first set of intersecting complete streets to be designed and constructed in Toronto, but will also transform Etobicoke as a regional hub.

Constructed in response to Toronto’s post-war suburban expansion, the Six Points Interchange is now reaching the end of its lifespan. The utilitarian design provides little amenity, no cycling infrastructure, cuts off parts of the neighbourhood from each other and takes up 16 acres of valuable land immediately adjacent to two subway stations. A new vision of the neighbourhood envisions a mixed-use community that will serve as a new civic centre located mid-way between Toronto’s international airport and the City’s downtown.

The new design will see the replacement of all the grade-separated interchanges with urban, grade-related intersections. Generous public boulevards will be provided on all streets including a double row of trees along Dundas Street West and space for patios along Bloor Street. New protected bike lanes will ensure that cyclists and motorists can co-exist safely. Overhead utilities will be buried and continuous tree trenches integrated into the streetscape. Public art features that preserve elements of the Westwood Theatre sign will be incorporated into the medians.

In recent years I’ve been following the Six Points Interchange story with interest. The above-noted Urban Toronto article really brought me up short. I realized I know very little about the project. I realized also that what I can learn by observing the current work in progress is minimal. I can learn more by reading including, for example, at the Novae Res Urbis Toronto newsletter, about the underlying decision making.

Some years ago I helped organize a Jane’s Walk led by then-MPP Peter Milczyn that focused on planning history related to reconfiguration of the interchange. I found the planning of the walk really interesting; I’m really pleased I was involved with the organizing of it. 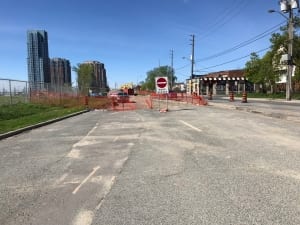 I recall occasions, over the years, where I’ve travelled in the area on foot. On such occasions, I noted that a pedestrian had to be super alert when crossing a roadway, as a car could suddenly appear from around a corner, heading straight for you.

I’ve also noted, with regard to history of the site, that the original interchange was designed during an era where engineering of the landscape, in service of car traffic, took primacy over other considerations. 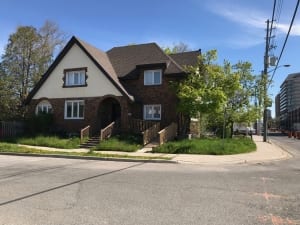 Given that I only visit Six Points on rare occasions as I no longer live in Toronto, I’ve found it of much interest to see the current landscape, and to compare it with the interchange as I remember it from visits over the years.

There’s a house at the periphery of the site that’s clearly been around for many years. I’ve often noticed it while walking in the area. I’ve posted a few pictures in celebration of the house. There’s something evocative about the back entrance in the final photo in the series. 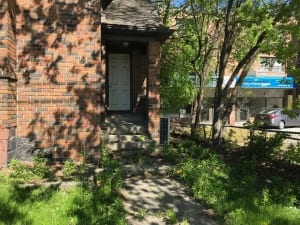 As I’ve noted at previous posts, the land-use planning cultures in the two municipalities appear to differ in significant ways.

Stated succinctly, my impression is that Mississauga’s culture seeks to ensure a close alignment, between rhetoric and reality, as it relates to community input during the planning process. Information about underlying decision-making processes also tends to be readily available, to everyday residents, at public meetings and at web resources. With regard to planning culture in Toronto, I will need more evidence before I can say anything of interest.

The larger context to all such stories is highlighted in a May 24, 2019 Toronto Star editorial entitled “Ford’s Ontario: More for developers, less for residents.”

Six Points reconfiguration community design review on TONIGHT at St. Andrews Presbyterian, 6-8 pm. If you live/work/walk/cycle in the area, give your feedback. Very little parkland. Bike lanes will be built but will abruptly stop at @TPS22Div

I was really pleased to learn the 75th Anniversary Event at the Small Arms Inspection... Message from Dan Schneider, former Policy Advisor for Heritage in Ontario government,...
Scroll to top