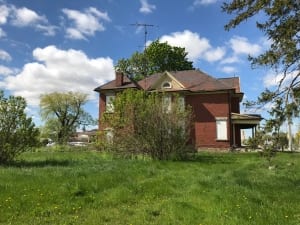 I stopped at this house, at the southeast corner of Trafalgar Road and Derry Road, while driving from Milton to Oakville, on my way to Toronto from Stratford.

Given that it’s a boarded-up heritage house, with a sign on it that suggests it was built in 1905, it has occurred to me that many cliches abound, in our collective imagination, regarding abandoned houses. I’m also aware that we as human beings get sentimental, or consciously chose not to get sentimental, about all manner of things. 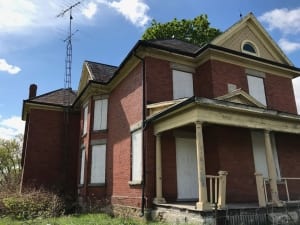 The sight of the building brings to mind a previous post entitled:

Curated Decay (2017) argues that things are worth preserving, whereas some things can’t be preserved; better by far to watch them rot 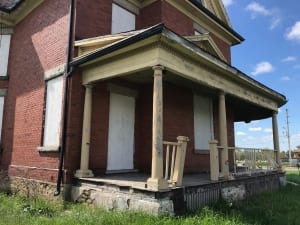 The house in question looks to be in a state where it is being preserved, in a manner of speaking. That is, it has been boarded up and there’s a sign in place, indicating that if there’s a need to call some entity connected to the property, a phone number is available. If any site visitor knows details about the house, please let us know. Who knows: The house may yet have a future, as a repurposed building serving some new and novel function.

I’m reminded of the homestead of Colonel Samuel Smith, in the neighbourhood of Long Branch in South Etobicoke where we used to live. As I’ve noted at a post about a presentation made in 2011 at the Long Branch Library, for many years the homestead was a farm out in the middle of the countryside. Then, one day it dawned upon the occupants, of the farm, that a city had grown up all around it. 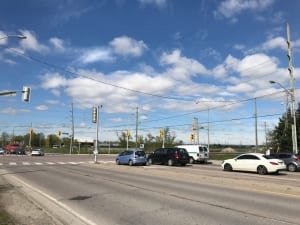 Whoever last lived at the house at Trafalgar Road and Derry Road has or have been gone for a long time. There are other houses from the same era, that are still occupied, still well looked after, in farmland along Trafalgar Road as you head toward Oakville. Possibly the location close to a busy intersection played a role in abandonment of this building.

In Stratford, where we live, you can find several neighbourhoods whose well-kept houses date from the same era, as the era of the house along Trafalgar Road. The Stratford houses, as with similar neighbourhoods across Southwestern Ontario, remain occupied and in good shape. In the summertime, it’s a delight to just wander up and down the streets, as visitors are wont to do, marvelling at the houses and their gardens. A pronounced absence of heavy traffic and noise is also a typical feature of such settings. Instead of roar of traffic, what you hear is birds singing, dogs barking, and people talking.

Local history, in a city such as Stratford, has given rise to an economic profile, which has encouraged preservation and upkeep of heritage houses, in quiet settings with extensive tree canopies. Such a profile would tend to be absent, or at any rate of a different nature, for a lone house at a busy intersection in the countryside. 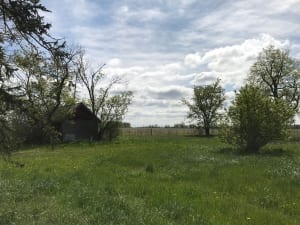 The corner of Trafalgar Road and Derry Road has farmers’ fields stretching off in all directions, as I recall. The role of farmers’ fields in history of urban development brings to mind two previous posts:

The latter post deals with institutionalized corruption as it relates to a municipality north of Montreal among other places. The topic of corruption brings to mind another previous post, entitled, “History and Social Theory (2005) by Peter Burke and Two Cheers for Anarchism (2012) by James C. Scott warrant a close read,” in which I refer to studies by James C. Scott including:

A partial description (in the author’s own words, which end at mid-sentence) at Google Scholar reads:

The topic of abandoned buildings brings to mind a May 28, 2019 Guardian article entitled: “Italy’s new ruins: heritage sites being lost to neglect and looting.”

“It started as a hobby,” Limongelli said. “These are places that have a certain allure, and telling their stories using photography was also a way to draw attention to their abandonment. Many people have begun following us and posting on our page their own explorations of Italy’s abandoned treasures. Often it was not a question of buildings or churches; sometimes it was entire ghost towns.”

The Italian national institute of statistics has counted nearly 6,000 ghost towns in Italy, many of which are medieval villages that succumbed to earthquakes or landslides. Some continue to attract visitors and tourists, despite being covered in vegetation. Others have ended up on eBay.

In 2012, the 25 homes comprising the abandoned medieval village of Patraricca, located at the source of the Arno river, were auctioned off with a €2.5m opening bid.

Message from Dan Schneider, former Policy Advisor for Heritage in Ontario government,... Stories we tell ourselves, about ourselves, help determine the course of our...
Scroll to top