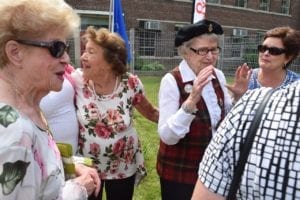 Groundbreaking ceremony at Small Arms Inspection Building, June 17, 2017. Jaan Pill photo. Click on this and other photos to enlarge them. Click again to enlarge the image further. 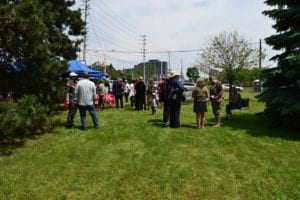 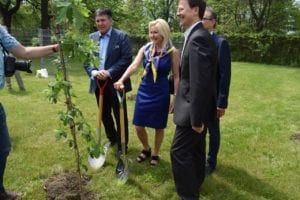 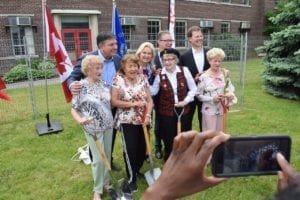 I was really pleased to have the opportunity, at a Small Arms Building groundbreaking ceremony on June 17, 2017, to record interviews about the steps – initiated when a Lakeview resident had seen a demolition truck at the gate of the building site – that saved the Small Arms Building from demolition several years ago.

As the result of a serendipitous observation by a local resident – by a person who happened to be at the right place at the right time – the Lakeview community was able to quickly take steps that eventually led to the designation, in 2009, of the building under the Ontario Heritage Act.

The latter provincial legislation deals with heritage buildings that are worth saving because of their cultural heritage value or interest.

The first – and crucial – step in the designation process was to keep the building from being demolished in the first place. In this case, it was a close call.

I have heard many, many stories in recent years about how the building came to be saved.

As with any story that is told by those of us not directly involved with the topic at hand, with constant retelling details in these kinds of stories tend to change.

This is akin to a process whereby human memories – in the absence of verifiable, corroborated documentation – can be viewed as malleable, capable of being stretched or bent into different shapes with the passage of the years.

By way of example, with regard to the near-demolition of the Small Arms Building, I have heard reference to “a bulldozer that had appeared at the site.”

In fact, I have spoken about such a bulldozer myself, at this website, repeating a story I had heard. I have also heard a reference to “a wrecking ball that was about to do its work.”

At the June 17, 2017 groundbreaking ceremony, I had the opportunity to discuss what in fact happened, that enabled the building to be saved from demolition. 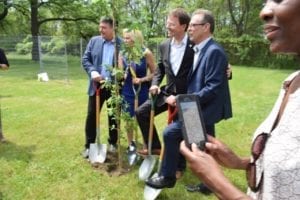 A lightly edited transcript of a June 17, 2017 discussion with a Lakeview resident reads as follows.

Lakeview resident: So, what happened was … Jim Tovey was involved with the Heritage Mississauga board at that time, and I’d heard that the building, which I drove by all the time, had this wonderful heritage aspect.

And that they were thinking of trying to get something together, to preserve the building.

And then there was one morning, I was driving … [by the corner of Lakeshore Road East and Dixie], [when I saw] a well-know wrecking company, with a truck, that was pulled up to the gate and waiting to go into the site.

And I just, like, I went home and I said, “Well, they’re trying to save that. What’s going on? Now, is this in imminent danger of being torn down?”

And then we phoned Jim Tovey, who like I said was on the Heritage Mississauga board. And so, within – he just somehow, working his magic, it just stopped right then, and the building was saved.

And, it was very serendipitous. I happened to be at the right place at the right time, and I knew who to call. My only little part, but it took – that’s what it was. 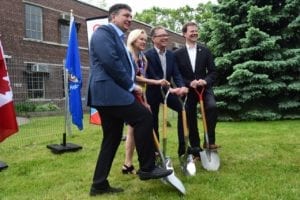 Truck from a wrecking company, with a huge dumpster on the back

A truck from a well-known wrecking company, with a huge dumpster on the back, is what caught the resident’s attention, on the day in question.

In additional comments on June 17, 2017, the resident noted that “there’s some various versions of the story going around. But it wasn’t actually a wrecking ball. It was actually a truck with one of the huge dumpsters on the back. And like I said, there was a well-know company name [of a wrecking company] on the truck. Which made me go, ‘Okay, this isn’t something – Something’s wrong here.'”

A story that warrants celebration 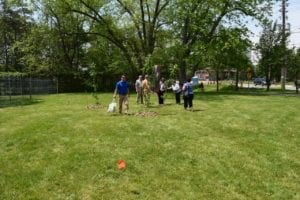 I am aware of many instances, for example in Etobicoke in the 1950s and in more recent years, when it was known that a particular building had heritage value, but the demolition was completed before steps could be taken to save it. The back story related to the Small Arms Building in Mississauga, which I describe at the post you are now reading, represents an instance where such a demolition was prevented, thanks to a timely, serendipitous observation by an attentive and resourceful local resident.

This is a story that warrants celebration. As well, thanks to a first-hand account from a reliable source, we now have definitive – accurate and verifiable – information about how the preservation of the building came about.

Marlene Slotin writes: Does anyone remember these details from Ville St. Laurent... Five steps to have a successful conversation based on research from the FBI’s...
Scroll to top