World history of land use helps explain many things, including why African-American families are losing their land

Since setting up this website in 2011, I’ve been writing about the history of land use.

Among the topics that interest me, with regard to land use, are: 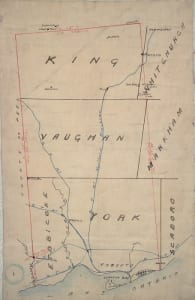 We can say regarding land use that humankind and nature are characters in a story whose outcome is unknown.

Humankind through destruction of forests and the like starting a long way back even before the industrial revolution, has been waging a war against nature.

With the Enlightenment and the primacy of science, along with a denigration of Indigenous ways of seeing and being, the war against nature has proceeded apace.

Nature has responded to this state of affairs in a scientifically predictable way. Mess with nature, and consequences follow.

As the scenario unfolds, Indigenous practices, focusing on actually getting along with nature, offer one route whereby we can get back on track with nature assuming it can be done.

I have posted an image of the Original Plan of the Toronto Purchase, as the use of cadastral maps during the premodern era, as a way for states to establish governance, is a topic of interest to me.

James C. Scott in Seeing Like a State (1998) addresses the topic of cadastral maps in a manner that is clear and easy to understand.

It took me a while to understand what the Toronto Purchase entailed. Such an understanding requires a comprehension of Indigenous perspectives on the reality of Canadian history.

Such maps – and the history behind them – warrant close study.

Kicked Off the Land: Why so many black families are losing their property

The current post is concerned in particular with a July 15, 2019 New Yorker article entitled: “Kicked Off the Land: Why so many black families are losing their property.”

Between 1910 and 1997, African-Americans lost about ninety per cent of their farmland. This problem is a major contributor to America’s racial wealth gap; the median wealth among black families is about a tenth that of white families. Now, as reparations have become a subject of national debate, the issue of black land loss is receiving renewed attention. A group of economists and statisticians recently calculated that, since 1910, black families have been stripped of hundreds of billions of dollars because of lost land. Nathan Rosenberg, a lawyer and a researcher in the group, told me, “If you want to understand wealth and inequality in this country, you have to understand black land loss.”

A white-supremacist backlash spread across the South. At the end of the nineteenth century, members of a movement who called themselves Whitecaps, led by poor white farmers, accosted black landowners at night, whipping them or threatening murder if they didn’t abandon their homes. In Lincoln County, Mississippi, Whitecaps killed a man named Henry List, and more than fifty African-Americans fled the town in a single day. Over two months in 1912, violent white mobs in Forsyth County, Georgia, drove out almost the entire black population – more than a thousand people. Ray Winbush, the director of the Institute for Urban Research, at Morgan State University, told me, “There is this idea that most blacks were lynched because they did something untoward to a young woman. That’s not true. Most black men were lynched between 1890 and 1920 because whites wanted their land.”

This is an article that warrants a close read as does the one that follows.

A September 2019 Atlantic article ie entitled: “The Great Land Robbery: The shameful story of how 1 million black families have been ripped from their farms.”

Owners of small farms everywhere, black and white alike, have long been buffeted by larger economic forces. But what happened to black landowners in the South, and particularly in the Delta, is distinct, and was propelled not only by economic change but also by white racism and local white power. A war waged by deed of title has dispossessed 98 percent of black agricultural landowners in America. They have lost 12 million acres over the past century. But even that statement falsely consigns the losses to long-ago history. In fact, the losses mostly occurred within living memory, from the 1950s onward. Today, except for a handful of farmers like the Scotts who have been able to keep or get back some land, black people in this most productive corner of the Deep South own almost nothing of the bounty under their feet.

An Aug. 18, 2019 New York Times article is entitled: “How the 1619 Project Came Together: Since January, The Times Magazine has been working on an issue to mark the 400th anniversary of the first enslaved people arriving in America. Now, it includes a special section, a multipart audio series and more.”

“Dannielle Bowman’s solemn photograph of the water is not just symbolic, but it is also a document of living history.”

A June 25, 2019 Guardian article is entitled: “‘Climate apartheid’: UN expert says human rights may not survive: Right to life is likely to be undermined alongside the rule of law, special rapporteur says.”

This article also warrants a close read, as does the following one.

Effects of climate crisis on children

I will conclude with a comment about the study of history; a subsequent post addresses the same topic in more detail.

I began my own study of history in 2011, when I became interested in the history of early settler society in Long Branch, a Toronto neighbourhood where we lived from 1997 until 2018.

Little is available, in the archival and historical record, regarding the first European settler in Long Branch, a British colonel named Samuel Smith. Back view (facing south) of Colonel Samuel Smith homestead house, located at what are now the school grounds of the former Parkview School. Originally a log cabin, built in 1797, the house had siding and extensions added to it over the years. Photo © Betty Farenick and family

No-one had stuck the colonel on a pedestal as a historical figure, which is fortunate, as otherwise I would not have developed a curiosity about his life. Once a figure in history is placed upon a pedestal, I for one have a diminished interest in the matter.

As a consequence of my fortunate state of ignorance about an obscure British colonel, I began reading about British colonial history and world military history, so that I could get a sense of the colonel’s life and times.

The first book I read about the British empire presented what I subsequently came to see as a one-sided celebration of British colonial history. Such books can be tremendous resource as information sources, but you have to have a taste for them. My tastes are not in such a category.

With further reading, I arrived at what I like to think is a more nuanced, more balanced view of British history.

Around the same time that I began to read about British history, I also began to educate myself about the history of police services in Long Branch.

I thought it would be an interesting topic to study. I first began to think about it when I attended a talk at a local historical society where an anecdote was shared about long-ago policing in Long Branch.

I learned a lot by interviewing old-time Long Branch residents. They told me about a fabled, much-admired police chief of the old Village of Long Branch.

What I learned led me in turn to reading about colonial and military history, in Canada and in other countries around the world.

My interest in the history of policing, along with wanting to know more about the life of Colonel Samuel Smith, led me to learn as much as I could about colonial and military history.

A common element in all such history is military strategy – that is, how to most effectively proceed with the organized violence that warfare (including hybrid warfare) entails.

During the past eight years of reading, I’ve achieved a slightly diminished level of ignorance regarding history.

In the wider society, the view that people in general have regarding history has broadened. By way of example, there is now a greater interest in the study of Indigenous perspectives regarding history.

Out of hundreds of non-fiction books, a small number have really hit home for me

It’s my view that no-one is in a position to explain everything there is to explain.

In the process of reading, I have developed some degree of understanding of how historians and other writers (such as anthropologists and political scientists) go about their work.

Of particular interest to me is how well a given writer is acquainted with archival and secondary sources and other forms of evidence, in a given subject area, and how well a study is organized within the space that’s available in a typical book-length study.

As well, the style of writing matters – I like coherence, clarity, a sense of organization, and a minimum by way of directing how a reader is supposed to respond emotionally, to a given text.

Marketing and public relations writing is well written writing.Of necessity, it involves a characteristic, smoothly flowing style of writing. Such writing has its place. It is there to sell a message. For many years as a volunteer I was involved with writing of news releases; such writing can serve a valuable purpose.

The mixing of history writing with marketing or public relations, however – or with promulgation of ideology – does not appeal to me.

I have an interest in the work of:

As I have been working on recent posts, I have been listening, on CBC The Current, to the CBC podcast, Finding Cleo, hosted by Connie Walker.

I’m looking foreword to listening to the entire podcast, which can be accessed at the link in the previous sentence; a YouTube link about the podcast follows below:

Watchdog’s version of what Justin Trudeau did is of interest, but is not... My interest in colonial and military history began with a study of local history...
Scroll to top