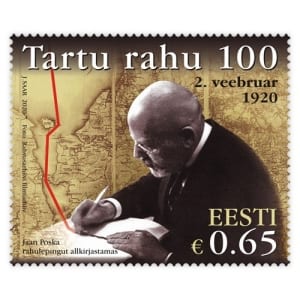 Commemorative stamp in celebration of the signing of the Tartu Peace Treaty, Feb. 2, 1920, a century ago. Jaan Poska, Estonia’s Foreign Minister and previously the Mayor of Tallinn, is shown signing the treaty. The image is from the Estonian Omniva online store.

The Tartu Peace Treaty was signed on Feb. 2, 1920 after two months of negotiations between the Republic of Estonia and Soviet Russia. The peace treaty brought the War of Independence (1918-1920) to a close and guaranteed the de jure independence of Estonia, which had been won on the battlefield. Under the terms of the treaty, Russia gave up in perpetuity any and all claims to the Estonian people and land. The head of the Estonian delegation, Jaan Poska (1866-1920), played a noteworthy role in securing such a favourable peace treaty for Estonia.

Estonia’s peace treaty with Russia was the first international act that mentioned the right of peoples to decide their own destiny. Therefore, both the Treaty of Tartu as well as other treaties between Russia and its western neighbours that were modelled on it constituted an important step towards enshrining the nations’ right to self-determination in international law.