If you live outside of Long Branch, and support the objectives of the Long Branch Neighbourhood Association, you can join as an affiliate (non-voting) member

Toronto has launched a city-wide “missing middle” housing project, as Michael Mizzi, director of zoning at the City of Toronto, explained at a recent Long Branch Neighbourhood Association AGM.

I was really pleased to attend the annual general meeting (AGM) of the Long Branch Neighbourhood Association, which took place on Zoom on Nov. 18, 2020. The guest speaker at the meeting was Michael Mizzi, director of zoning and secretary-treasurer of the Committee of Adjustment, who spoke about a plan to “gently’” increase housing density across the city. 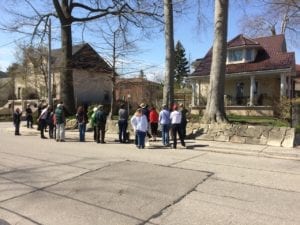 The city as we know faces an urgent need for new housing. Shrinking family sizes are giving rise to underused houses. Years ago, neighbourhoods were more densely populated. As well, many residents want to age in place in their home communities, while new arrivals to the city also need a place to live. In response, Toronto has begun to expand laneway housing and secondary suites.

Next steps focus on ways to increase gentle density across the city, by building a “missing middle” form of housing – from duplexes to low-rise walk-up apartments. A series of expanded zoning permissions are to be brought forward by teams of planners at the city, who will consult with registered community associations, in the next three years.

In Toronto’s case, the missing middle means everything between detached houses and mid-rises, namely: duplexes, multiplexes such as triplexes or fourplexes, walk-up four-storey apartments, and other hybrids, like townhouses. Planning teams are at work focusing on four priority areas. These include coach houses and garden suites; triplexes and fourplexes; an intensified increase in gentle density along 250 kilometres of major streets; and a pilot project in the Beaches. You can access details about Michael Mizzi’s talk here. 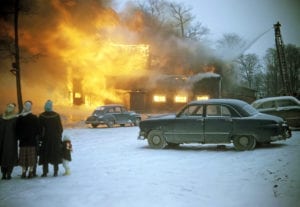 Slide 5. We owe thanks to Robert Lansdale for Photoshop colour correction on this image from the 1958 fire at Long Branch Hotel. Alex Stewart photo. Click on the photo to enlarge it. To read more, search for “Long Branch Hotel” at this website.

In a Q & A, Mizzi noted that Long Branch has the highest number of applications at the Committee of Adjustment, of any ward in the city. “I think,” he said, “it’s considered one of the more developable areas of the city, one of the more desirable areas by builders, so managing that growth, it will be a challenge for organizations like yourself and the planning department.”

At the meeting I also learned about a recent membership survey, which establishes priorities for the association’s next steps. Speakers also shared details about LBNA projects involving local history and the neighbourhood’s impressive tree canopy. I urge residents to join the association or renew their membership, and to help out with its work on behalf of Long Branch and the wider community. If you live outside of Long Branch, and support the objectives of the association, you can join as an affiliate (non-voting) member.

Creative Visualization (1979) by Shakti Gawain outlines how to create your inner... Dr. Chaim Bell Has shared a Dec. 25 2020 Twitter thread which I am pleased to...
Scroll to top