Creative Visualization (1979) by Shakti Gawain outlines how to create your inner sanctuary, in the event you need one

This post is concerned with a couple of pages from Creative Visualization (1979) by Shakti Gawain published by Bantam New Age Books. The rest of the book, aside from the two pages, I do not know much about.

At this post I have included photos that deal with human agency; they highlight the local history of Stratford, Ontario and Hazleton, British Columbia. 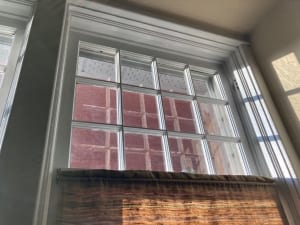 Detail from century-old house in Stratford, Ontario. The window pane on the upper left is a replacement pane, provided by Hoffmeyer’s Mill in Sebringville near Stratford. The mill’s history goes back well over a century. Jaan Pill photo

A good overview (from an interesting academic perspective) of the New Age era of the 1970s and 1980s (in which David Spangler figured prominently) is provided by Encyclopedia Britannica in an entry entitled: “New Age movement.”

Having attended talks, workshops, and events in Ontario featuring David Spangler and other personalities connected with Findhorn in those years, I read the Encyclopedia Britannica overview with interest.

As the entry notes, the enthusiasm for crystals that is characteristic of some aspects of a New Age orientation is not what can be characterized as a data-based approach to dealing with healing; the topic of crystals is also mentioned in passing at a previous post entitled:

Spangler’s reflections about the New Age era are available at several sources including: Apprenticed to Spirit: The Education of a Soul (2012).

One of the books published by Bantam New Age Books (I refer to a list of books in my 1979 paperback copy of Creative Visualization) concerns one of many spiritual movements that, as has happened on occasion, have led to disastrous outcomes. The Encyclopedia Britannica also refers to scandals that have arisen in the history of such movements.

I refer in particular, with regard to the Bantam New Age Books publishing list, to a Tibetan Buddhist movement as described in a November/December 2020 Walrus article. The article is entitled: “Survivors of an International Buddhist Cult Share Their Stories: An investigation into decades of abuse at Shambhala International.”

Cults like non-cults are concerned with universal, omnibus questions such as, “What is the meaning of life?”

The history of Tibet and of Tibetan Buddhism is of interest to many people. A good way to place Tibetan Buddhism into a meaningful context (among many meaningful frameworks available to us) in contemporary society, in my view, is to celebrate and support the work of Bhutila Karpoche, MPP, Parkdale–High Park. 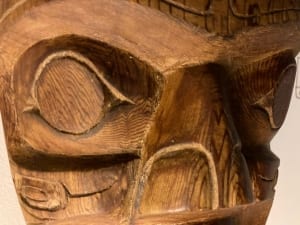 There are cults and conspiracy theories and similar phenomena and there are also non-cult projects that are helpful (and worth supporting) in our shared quest which is to find a way forward in our lives.

I mention these things by way of establishing a context for the current post.

Stories we tell ourselves

I have an interest in the things we tell ourselves. In a sense, we are speaking of land use decision making within our minds. We are also dealing with storytelling.

To be more specific, I refer to the concept of an inner voice, by which I mean a kind of ongoing source of commentary, which is happening in our minds.

At this post I share some anecdotal experiences which are related to land use in the realms of the imagination.

I first began to think about self-talk in the late 1960s when I came across the concept that it’s a good idea to picture things, in one’s mind, in positive ways: to focus, that is, on what works, and what a person wants to do to make things better, rather than just focusing on venting.

What we’re dealing with, in this context, is human agency. In New Age terms, agency has been spoken of as “manifestation.”

Just focusing on venting, to get back to agency, demonstrates agency at a low level. Focusing on how to address a given challenge, and determining the next steps in addressing it, demonstrates more agency. A next step after that involves working with others in a productive way to address the challenge.

I first began to read about the self-talk concept (about things we say to ourselves) in a systematic way in the 1980s. From such reading, which was based on work in those years by a writer named Aaron Beck among others, I learned of an effective way to deal with everyday negative thoughts and feelings.

The technique in question involves getting a sense of the self-talk – the ongoing refrain, expressed in a single sentence – that appears to be associated with a given negative feeling.

In a subsequent next step, you take an index card and draw a vertical line down the middle of it. On the right, you write down the negative thought, and then you think of a suitable alternative positive thought and you write that on the left side of the card.

Then, the next time the negative feeling arises, you repeat to yourself the alternative positive thought. Over time, the negative feeling fades away. Although I was not, in the early 1980s, particularly strongly data-oriented, I was aware that research published in peer-reviewed professional journals suggested that such an approach was effective, under specified conditions, in addressing negative moods.

In one case in the late 1980s, every time I found myself in a particular situation, I was finding that the self-talk I encountered would take a strongly insistent and negative turn.

In this case, the self-talk was of such a heavy-duty nature, that the idea of turning to an index card to address it did not occur to me.

Instead, I made a point of comparing notes with other people, whose own life experiences were sufficiently similar to my own, so that I could figure out how to deal with such a form of self-talk.

After a year of talking with like-minded people, a friend told me what the self-talk, that bothered me each time I was in a specified situation, was saying to me.

After I heard the explanation, the inner voice never bothered me again, each time I proceeded to enter a particular situation – which, as it happened, involved making a speech, to one or another large audience.

For the next 15 years, I did volunteer work that came out of my initial desire to compare notes with other people, about a topic that concerned me. I was in that context involved in the launch (as noted elsewhere at this website) of several nonprofit organizations at the local, national, and international levels. Had I just turned to an index card, that volunteer work would not have happened.

One particular stream of my own self-talk, expressed in a brief positive sentence, has been around for decades. That’s a form of self-talk that I like. That is automatic positive self-talk.

To address this form of self-talk, I tried the index-card routine that I have described earlier at this post.

As a result, I came up with an all-encompassing alternative positive thought. Such an alternative thought has been effective, but only up to a point.

I then remembered that years earlier in 2004, when I had taken a Mindfulness Based Stress Reduction (MBSR) course in Toronto, I had attended an intake interview, which was required of all attendees before they were admitted to the course. (I’ve spoken at length about mindfulness at a separate page at this website.)

At the interview, I encountered a brief reference (just a few words in passing) to a strategy, whereby a person could set up a kind of internal shield, that would protect them from the loss of equanimity that can occur, when negative messages impinge upon a person’s inner being. Years later, I thought about the strategy.

In the MBSR course, which I found helpful in dealing with daily stress, I did not encounter further reference to this inner shield concept.

However, I did encounter a reference to Creative Visualization (1979) by Shakti Gawain. This is one of a handful of books that I still possess from those years. The pages have turned yellow especially along the edges: a nice touch. I recently looked up the pages that deal with “Creating Your Sanctuary,” and I read the description of how to build what amounts to an inner shield.

Essentially, you picture a place, an environment, where you feel at ease, entirely comfortable. Around you is some form of barrier or enclosure made of light, which keeps that which is bothersome on the outside, away from the sanctuary. Sometimes I envision the barrier as a hemisphere that extends above the space, with a hemisphere below that which extends under the surface of it.

The visualization can change

Gawain notes, in her two-page description of the sanctuary, that one’s visualization of the space need not be static: it can change.

I’ve followed the instructions. When I encounter the heavy-duty self-talk, that I’ve described above, I enter the sanctuary and leave the self-talk outside.

I now also visit the sanctuary when I want to leave behind all kinds of negative self-talk, not just the heavy-duty variety.

I now see the sanctuary as operating among other things as a touchstone of sorts, a test or criterion for determining the quality or genuineness of a thing, as an online Merriam-Webster Dictionary entry puts it. When I speak of the quality of a thing, in this context, I refer to the kernel or central feature of a concept or memory.

Before I thought of the word “touchstone,” I thought of the process in terms of getting to the “essence” of a memory or concept. However, the potential association with essentialism and the controversies and turbulences associated with the word prompted me to search out another term.

When I first entered the sanctuary in the process of building it in my mind, I happened to be in a dreamlike state just before falling asleep. Given the circumstances, the imagined sanctuary shimmered and shape-shifted like nothing I’ve previously experienced. As Gawain notes in her instructions, that can happen.

Vancouver’s missing middle: Dec. 14, 2020 Tyee article highlights videos by... If you live outside of Long Branch, and support the objectives of the Long Branch...
Scroll to top