Coffee shop at the southeast corner of Bloor and Bathurst is closed, courtesy of pandemic

From time to time for essential reasons, I visit Toronto.

Among the things I noticed on a recent visit, Jan. 12, 2021, is that a coffee shop at Bathurst and Bloor (southeast corner) where I’ve had coffee in the past is now closed. 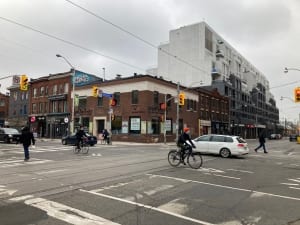 Building at southeast corner of Bloor and Bathurst, where people used to hang out for coffee and a bite to eat, now has a “FOR LEASE” sign in place.

There are fewer people on the streets. Many wear masks. People pass by each other on the sidewalk just a bit more closely (space being limited) than when I find myself walking in Stratford, where I live. That is to say, in this part of Toronto there’s less social distancing (but not a great deal less) than I’m used to. In some cases (although I didn’t make a close study regarding this point), it appeared to me that people without masks may on occasion be walking by each other at a distance of less than two metres. Where I live, people walking along sidewalks or walkways make a point to give each other a wide berth. The contrast in a culture of walking is an outcome, it appears, of circumstances involving numbers of people and amount of space. 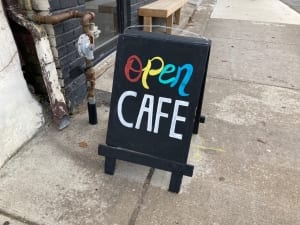 Signage everywhere in this area has a sure, confident touch.

I like to visit this part of Toronto as long as I don’t have to walk along Bloor Street a lot, in the current era. Our family doctor is part of a medical practice at the Bloor Medical Clinic. We’re very happy to be visiting a great physician who is part of a great clinic. The waiting room has chairs set especially wide apart in light of current circumstances. It’s never been crowded even during the pre-pandemic era. Before I switched to the clinic some years ago I was at a clinic where there was a bench facing a reception area within a very limited amount of floor space. I like a setting where there’s plenty of room. 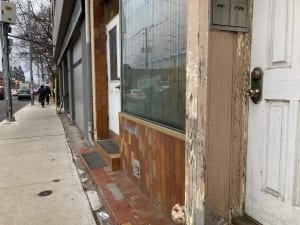 The weathered look appeals to me. It’s something a visitor will notice.

The visual qualities of this part of Toronto are a source of delight, for this visitor, for whom such visits tend to be several months apart especially during these days. All manner of visual information is packed together. That works well. Better than having everything set wide apart. The graphic design associated with signage for businesses also tend to have a nice touch. Plus I like how the passage of time is evident. There’s a weathered look to things. 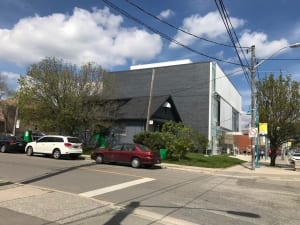 Humber Lakeshore Campus Fitness Centre on Lake Shore Blvd. West in Long Branch. The photo is from a May 25, 2019 post about strength training.

I walked along Bloor Street in this area and up and down a few side streets. Shops are closed along Bloor except that curbside pickup is available for various things including cannabis. I like the idea of people lining up in the cold waiting to pick up weed. This is so much more civilized than the old days when the transactions were done furtively and a person was always liable to run into tight situations involving the legal parameters (of days past) of cannabis.

On the way back to Stratford we stopped to get a bite to eat by way of take-out from a new Le Gourmand cafe at a small plaza on the north side of Lake Shore Blvd. West just west of Kipling Avenue. I usually don’t eat much or anything for breakfast so it was good to stop in the afternoon. The sandwiches were good. 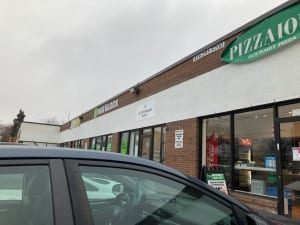 On the drive back to Toronto we stopped at Le Gourmand at a little plaza across from the Humber College campus at Kipling Avenue and Lakeshore Blvd. West. Le Gourmand has stores elsewhere also. I enjoyed the sandwiches (I ate two of them) that day.

The Humber Lakeshore Campus Fitness Centre is nearby on Lake Shore Blvd. West. It’s been a while since I worked out at this fitness centre. I very much like how it’s designed – there’s lots of space, and everything about the place feels right. I look forward to signing up again once the pandemic has abated. In the past I enjoyed working out at this fitness centre when visiting Toronto. Meantime, I work out at home with free weights which in the circumstances works well. 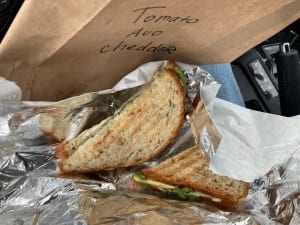 The sandwich (one of them). Both were good.

I follow a periodization routine with my strength training program. I work out six weeks in a row, then take two weeks off to rest. I really enjoy the two weeks off. In some ways, it’s the favourite part of my fitness regime.

I also spend an hour or ninety minutes walking each day. That makes for a good routine. It helps to keep a person’s mind clear. The research evidence concerning the health benefits of exercise/physical activity is robust, which I mention in passing given that I am keen about the value of evidence and evidence based practice.

Where we walk there’s little traffic and lots of trees. In the warmer weather there’s lots of rabbits hopping around, in the neighbourhoods where we walk. The baby rabbits, who perhaps haven’t figured some things out yet, sometimes like to stop and stare at people walking by. The older rabbits just hop away. If they stop, they’re at a safe distance and they can see you are walking away, from the point where they just encountered you. On one occasion we ran across a skunk. It stopped to stare at us, then seemed to be standing up to make itself look big and tough. We stopped in our tracks, very impressed with its threat-display. Having let us know the shape of things, and observing that we had stopped at once, the skunk then sauntered off across a lawn.

As I travel back and forth, every several months, between Stratford and Toronto, I think of the connections between the smaller and the larger city. I’ve written before about the history of the Stratford Festival, and more recently about the former R.M. Ballantyne textile plant in Stratford. What comes to mind is the close historical connections – at the level of financial capital as well as human capital among other things – between the two cities in the context of wider historical connections going back to the history of early modern England and the British empire.

I think too about the fact that when a person is away from a particular environment for some time, as I am with reference to Toronto, then one views things (for example one views visual phenomena on streetscapes) in what can be described as with ‘fresh eyes’ or in a fresh way.

The R.M. Ballantyne Ltd. textile plant was built by a thread company, which... Poor reading, writing and numeracy skills in adults make up a literacy gap in...
Scroll to top