Update: At this post I talk about ticks and Lyme Disease. I recently came across an article about this topic, well worth reading; a September/October 2020 Walrus article is entitled: “Invasion of the Ticks: Inside the quest to track one of humanity’s tiniest deadly predators.”

Until we met on Thursday, July 22, 2021 at Long Point Provincial Park on the north shore of Lake Erie, we had endured a ten-month break from our Malcolm Campbell High School (MCHS) picnics in Toronto and elsewhere. 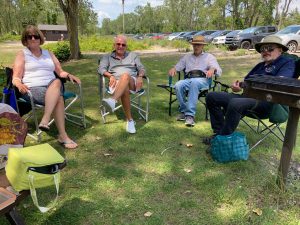 MCHS is a high school located in Montreal that I graduated from in 1963. I much enjoy meeting fellow graduates and teachers – and also people who attended even without graduating – and their friends and families.

In previous years some MCHS grads have often met indoors at Mandarin restaurants in Toronto and Kitchener. 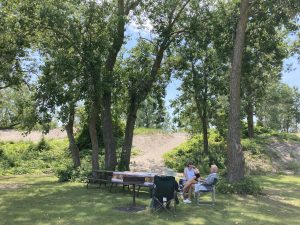 Seventeen months ago, however, we decided in light of COVID-19 to switch to outdoor lunches.

Since the September 2020 Stratford meeting we had taken a 10-month break on account of the ongoing pandemic. On July 22, 2021 we met once again, this time at Long Point Provincial Park on Lake Erie.

We’re planning future meetings in London, Toronto, and Kitchener. MCHS grads and family members and friends are welcome to join us. Send me an email at jpill@preservedstories.com if you wish to be on our email list. Doesn’t matter what year you graduated. 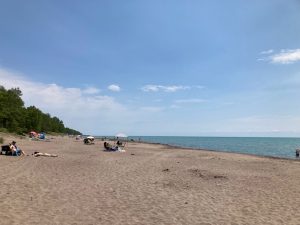 I found it most interesting to drive to Long Point from Stratford on the morning of July 22 using Google Maps on my iPhone to find the way. Given the previous months of social distancing, it was great to meet with friends from MCHS once again. 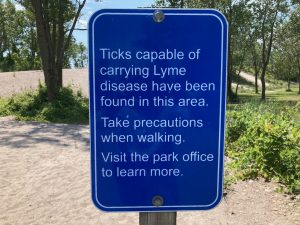 I much enjoyed meeting with Gina Cayer, Peter Reich, and Scott Munro on July 22 at this park on Lake Erie, which Gina had suggested as a great venue. We had messages from four other persons who were unable to attend given other commitments on this day. It’s good to know there’s plenty of interest in our get togethers.

As well, there are parallels in land use planning strategies (related to military defence in response to potential invasion by American forces) connected with settlement after the American Revolutionary Wars and in the context of the War of 1812. As I’ve mentioned elsewhere, Indigenous warriors played a key role on behalf of the British side during the latter war. After the conflict ended, however, the decisive Indigenous contribution to the military outcome was ignored in the ensuing peace treaty. 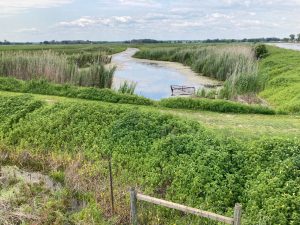 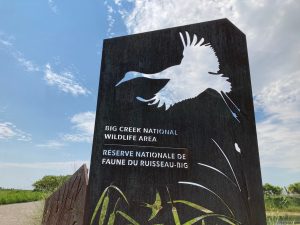 An Ontario educator who was a key player in the founding of Canada’s residential schools has a family connection to Long Point as the above-mentioned Heritage Resources Centre working paper notes. A university is named after him; a statue depicting him has recently been torn down and will not be replaced.

There are no park fees to pay if you visit from Monday to Thursday but a daily vehicle permit, which can be ordered online in advance, is required. Gina Cayer has commented that the parking lots and beach are absolutely packed on weekends.

I can add that a notice at the Norfolk County Tourism website reads: “Norfolk County’s Tourism office recommends that tourists should park vehicles at Long Point Provincial Park for the best beach experience. The Ontario Ministry of Natural Resources is the steward of the beachfront along the entire stretch of Long Point from the provincial park to the causeway. However, beach-goers in the area outside of the Provincial Park are asked to respect the property owners who live near the beach.” That is to say, sometimes the roadway leading to the park entrance is also packed with cars.

On the way back to Stratford I stopped at the Big Creek National Wildlife Area. It was great to hear the birds and toads. I climbed a watchtower where I could look around in all directions. I regularly walk in parklands in Stratford where I live and thought that Big Creek would also be a great place to go for a walk. 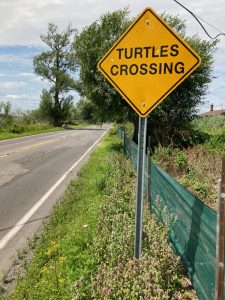 On the roadway heading away from Long Point Provincial Park near the entrance to Big Creek National Wildlife Area. Jaan Pill photo

I also stopped, on my drive back to Stratford, to take a photo of a Turtles Crossing sign. Gina has mentioned she saw me taking pictures as she was driving from the park.

What we talked about

We had many interesting discussions about the local history of the park, including activities of the Long Point Company, which in 1866 (as the Heritage Resources Centre working paper notes, p. 33) purchased about 6044 hectares of land on the Long Point peninsula – land that was ideal as private property for hunting and related pursuits. The Charter of the Company, the working paper explains, “controlled issuance of licenses to hunt, trap and fish on its property.”

We also spoke about the popularity of French immersion among area parents (so local kids can get government jobs when they grow up) and the rise in house prices in the hamlet of Long Point which you pass through on your way to the park. We spoke as well of occasional flooding in the area and steps homeowners are taking in the face of increasingly frequent, extreme weather events.

Scott and Gina spoke of the light rail transit (LRT) that now runs in Kitchener and may be extended to Cambridge. Gina commented that in Montreal the extension of an existing light rail line is also in the works, and a new Champlain bridge has been built with an LRT running on it. Not having visited Montreal for some years I was interested in these transit updates.

We noted that we have to take care when travelling in the US (this applies I guess anywhere) as otherwise your iPhone and credit cards may get stolen. We also talked about ticks and Lyme disease. I wear long pants and a long-sleeved shirt pretty well all the time especially when outdoors off the beaten track.

Both Gina and Peter have a connection to Ahuntsic. Peter learned about the July 22 picnic from Lynn Legge as I understand.

There’s plenty more to report, about what we talked about including additional comments of interest from Peter and Scott as well as from Gina but I’ll sign off for now as it’s time to go for a walk.

Erving Goffman devoted his career to the structured, intensive study of ‘what’s... From the Toronto Public Library website, you can access Erving Goffman’s...
Scroll to top