What would you tell your younger self of thirty years ago?

Speaking with your younger self of thirty years ago is a form of role play.

In role play and drama, we imagine things, an activity that we as performers, as well as we as onlookers, can find enjoyable.

As an elementary teacher years ago, I enjoyed having our students rehearse and then perform role plays, related to what the class was learning. Everybody enjoyed those role plays. They enjoyed them so very much. There was a quality of magic, whenever students performed in front of the class.

By way of turning to another topic, I can add that I stuttered severely, years ago. Sometimes, I could not get out any words at all.

At other times, as when I made two well-rehearsed campaign speeches, many years ago in a large high school auditorium in Montreal, I spoke fluently. I was elected president of the student council at Malcolm Campbell High School for the 1962-63 school year, as a result.

People who stutter are on occasion fluent when they sing, and when they play a role on stage.

Fluency as a second language

At a speech clinic in Edmonton, in July 1987 at the age of 41, at the Institute for Stuttering Treatment and Research (ISTAR, for short), I relearned how to speak.

I learned fluency as a second language, and spent the next four years and four months practising, and consciously applying, my fluency skills every day. I did this because I knew that if I didn’t, I would lose the skills I had acquired at the three-week ISTAR clinic. That is what happened, in fact, after I attended a different three-week clinic in Toronto in 1976, at the age of 30.

Other people who stutter will approach things in other ways than I have described. Not everyone will be able to achieve lasting gains from a speech clinic of the kind I attended. It all depends on how a person’s brain is wired for speech production.

I can add that some people who stutter have no use for stuttering treatment of any kind, and that approach can work wonders for them, as well. There’s no one way to deal with stuttering. Each person finds their own way.

The Canadian Stuttering Association (CSA) offers an impartial forum for the sharing of information, with the one exception that we do not offer a platform for scam artists to sell us a ‘quick cure’ for stuttering, as no cure exists. The CSA also has a culture (and a constitution and bylaws, developed with extensive membership input) that ensures leadership succession proceeds smoothly, as the years come and go. 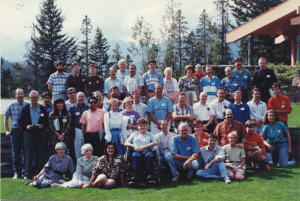 Attendees at Banff 1991 conference, which led to the founding of the Canadian Association for People Who Stutter (CAPS), subsequently renamed as the Canadian Stuttering Association (CSA). Jaan Pill is second from the right, sitting in the first row wearing jeans.

I mention these things because I’ve been preparing for an upcoming panel discussion organized by the Canadian Stuttering Association, of which I’m a co-founder. The panel is built around two questions:

What prompted you to go to Banff thirty years ago?

I went to Banff in August 1991 because I was involved in a two-year planning process, which led to the launch of what now is known as the Canadian Stuttering Association.

At the conference, attended by about eighty people, we made a point of ensuring that each person at the conference would end up speaking roughly the same amount of time. This was our standard practice at a local group, the Stuttering Association of Toronto, that I had founded in Toronto in September 1988.

The first two seminars dealt with self-help groups. At the first seminar, people from several groups from across Canada briefly described their groups. We then broke into groups of eight, and spent some time addressing some specified questions. After that we re-assembled and a spokesperson from each group briefly reported what their group had discussed. After that we had a general discussion.

The second seminar addressed key questions that had arisen during the previous seminar. We again broke into groups of eight, and so on.

The third seminar was the most important event at the conference. We asked the question: “Should we form a national association.” The answer was yes, and so here we are today.

What would you tell your younger self of thirty years ago?

I would tell my younger self some things that I recall with vividness from my younger years.

I remember there were times when I could not get out any words at all. Words starting with the “H” sound would at times stop me in my tracks. Words like hello, house, horse would at times be impossible for me to say. It was a very frustrating feeling, when this happened. In the course of everyday life, it’s pretty hard to avoid words that start with the “H” sound.

One time, as I recall vividly even now, I phoned someone (this was in my teens or early twenties) and tried to say “Hello.” After about thirty seconds of a silent struggle to say “Hello,” I hung up the phone. That didn’t feel good. I still remember how I felt. “Here I am, at the start of my life. I pick up the phone, and I can’t say ‘Hello.’ This does not look good.”

Well, I paraphrase. I can’t remember exactly what I said to myself, at that point, but I remember the feeling. It didn’t feel good.

I would also tell my younger self that, as a volunteer, I’ve made a contribution to various causes I’ve been involved with because I have a capacity to listen.

I would tell myself that one thing I could have done better is to do an even better job of listening.

My younger self is, of course, an imagined self. In talking with that younger self, I’m engaging in a form of role play. So, I  can picture what the younger self would say in response. He would say, “Well, you can’t go back in time and come out as a better listener. So, how about you do this, right now? You can become a better listener, even now.”

To which I reply, “You’re a wise one, my younger self. I will listen even better, right now. Thank you, for your wise advice!”

Well, that’s a good story, but since I’ve been doing some rehearsing for this five-minute segment at the panel, I’ve decided to go with another story instead. Here’s roughly how it goes:

After I got back from the three-week speech clinic in Edmonton, which I attended in July 1987, I began to make fluent presentations to large audience. That was a great activity, which I much enjoyed. It was also an activity I had not been in the habit of doing before.

These were fluent presentations. I had rehearsed extensively beforehand. I was throughly familiar with the fluency skills, that I was required to apply, in order to get the words out smoothly. But I ran into a problem with an inner voice. Each time I made such a presentation, an inner voice would say, “You’re not supposed to be able to do this. You’re supposed to be falling flat on your face.”

That inner voice really bothered me. I spoke about this with my non-stuttering friends. They couldn’t see what the problem was. Which is understandable. What I was describing was not something that a person, who is naturally fluent, would readily understand.

It occurred to me that it would be helpful if I were to compare notes, about such matters, with other people who stutter.

That’s what prompted me to launch the Stuttering Association of Toronto, in September 1988, a year after I had returned to Toronto from Edmonton.

After a year of meetings, I learned, from a speech therapist who stutters, who spoke at one of our meetings, what the inner voice was telling me. It was saying, “It’s time to adjust to some changes that have occurred in your life.” After I achieved that realization, the inner voice never bothered me again.

I owe many thanks to that troublesome, bothersome inner voice, which prompted me to spend the next fifteen years actively involved in volunteer work on behalf of people who stutter.

After those fifteen years, I turned to other forms of volunteer work, all of which (like my work on behalf of people who stutter) has been focused on a process that people like to describe as community self-organizing.

A key part of such work, in my experience, is the capacity to listen closely to what people have to say, and then to work together with other people to respond in a practical way to what people are saying. People are saying that particular things need to get done, and my task is to figure out how I can help in getting those things done.

Hayden Bulbrook outlines the history of heritage houses (now under threat of... What role (if any) does religion play with regard to trends in COVID-19 vaccination...
Scroll to top