The authors are reputable, have acquired and are in a position to share solid information, and they cite their sources. In my experience, a news report is always of interest but a more in-depth study of things, as through reading a book by a first-rate author, is at times of even greater interest and value.

Whatever it is that we are going to visualize, when we consider the turning of the pages, is going to be concerned with a person’s focus of attention. [3] If it’s interesting enough to follow, then we follow the story. Often that entails clicking a link; as readers, viewers, and/or listeners we participate to a greater or lesser extent in determining where our attention will go. In some cases, the determination of where our attention goes is determined less by us and more by algorithms. In this regard,who is running the show is a topic of interest.

In summary, the turning of the pages and the bringing to life of the content are interactive processes.

The three books that I refer to concern themselves with the past. Again, in summary, we can say that the past is of relevance to the extent that the past always relates to the present moment. The past is accessed solely through the portal of the present moment, which is accessible through means of the application of mindfulness, however mindfulness may be conceptualized and practised.

The connection between past and present is highlighted by various expressions such as ‘the past is prologue to the future.’ As in, for example, The Past is Prologue: The Future and the History of Science.

The above-noted link opens a chapter from There’s a Future: Visions for a Better World (2012).

An excerpt (I’ve made some minor spelling corrections) reads:

Given the importance science has in our lives and societies, it is not [a] small question to consider whether it is possible to predict the future of this discipline. Using the history of science as his main tool, Sanchez Ron analyses predictions made by a number of scientist[s] about the nature of science and its future paths. Providing a wealth of examples from those who have practice[d] the soothsayers´ art, the author chooses cases that missed the mark entirely, including predictions in mathematics (Hilbert), The theory of evolution (Erasmus and Charles Darwin) and artificial intelligence (Wiener, Von Neumann and Turing). The author also explores the relationship between science and technology, as well as addressing issues such as how social needs or science fiction affects predictions of the future of science.

This paragraph by way of its back story, its creation, involves another language than English; it involves Spanish. It underlines the fact that English is one language among many.

The excerpt brings to mind another study of interest: Elusive: How Peter Higgs Solved the Mystery of Mass (2022).

An excerpt for a blurb for the book at the Toronto Public Library website reads:

On July 4, 2012, scientists at the Large Hadron Collider at CERN gathered to make a momentous announcement: after nearly a half century of speculation and work, the Higgs boson had been found, and the mystery of mass solved. Not far offstage was the man for whom the particle had been named: Peter Higgs. The Higgs boson is an anomaly. No other basic particle of physics is named after a person. And in a point of almost supreme irony, it is named after a man whom most physicists would call one of the most retiring people ever to join the field – indeed, on the day the Nobel committee called him to tell him he had won, Higgs had fled to a fish-and-chip shop by the sea, and ended up learning of his prize from a stranger who, recognizing him, stopped him the street to tell him the news. Or at least that’s one way to tell the story.

In the days since it was released, academics have generated responses to exam queries that they say would result in full marks if submitted by an undergraduate, and programmers have used the tool to solve coding challenges in obscure programming languages in a matter of seconds – before writing limericks explaining the functionality.

‘The future is history’

In relating past to present we can also refer to the expression ‘the future is history’ which is the title of a book I have previously discussed at this website. [1]

An except from the above-noted previous discussion at this website reads:

The comparative study of Nazi and Stalinist mass murder requires a strong conceptual framework. Otherwise, you are spinning your wheels and wasting time.

That is a key take-away from my reading of a chapter in Beyond Totalitarianism: Stalinism and Nazism Compared (2009). 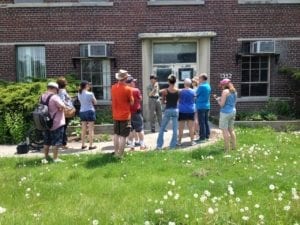 Councillor Jim Tovey (1949-2018) speaking at May 28, 2016 Small Arms Jane’s Walk. Jim Tovey was a key player in saving the Small Arms Inspection Building in Mississauga from demolition and coordinating efforts to secure strong government and community support for its repurposing. Jaan Pill photo

I’ve also recently finished reading The Future Is History: How Totalitarianism Reclaimed Russia (2017) by Masha Gessen. The latter book argues – the collapse of the Soviet Union in 1991 notwithstanding – that the government of Russia remains totalitarian, albeit in a form that differs, slightly, from the Stalinist regime of the 1930s and 1940s.

Assuming that the latter book’s definition of totalitarianism is accepted by readers, Gessen’s argument is compelling. I have turned to Beyond Totalitarianism (2009) because I want to get up to speed, as best I can, on current historiography as it relates to totalitarianism – as a concept, and, in particular, as an analytical concept. 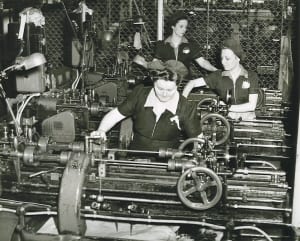 That is, what do we mean when we speak about totalitarianism? And how useful is it as a term that seeks to explain what has happened in the past, and what is happening now?

Beyond Totalitarianism (2009) is aimed at more of a specialist audience, a smaller audience – whereas The Future is History (2017) is more for general readers, a larger audience. Books for larger audiences tend to present arguments in slightly simpler, less nuanced forms thereby reaching more readers. The general reader takes a stroll through the park. The specialist reader, on the other hand, may not find the slog, through a dense and intricate package of words, quite as easy going. 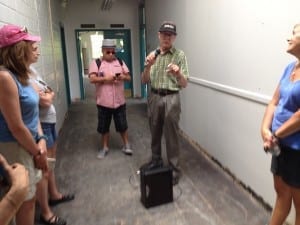 Jim Tovey did A-1 job hosting the only @Doors_OpenTO in @citymississauga (also known as the Small Arms Jane’s Walk) at the Small Arms Inspection Building in Mississauga! Jaan Pill photo

Of the two books about totalitarianism that I refer to at this post, I can say that each is a compelling read. From reading them, I have a better understanding of how things work in the world. For any book related to history, I want storytelling that connects at an emotional level, with its audience; I want reliable evidence that drives the story forward; and I want a conceptual framework that enables me to understand the meaning of the story. Depending on the intended audience and the quality of the editing, a given book may be more accomplished in some of these areas, and less in others.