You can access the decision in PDF format here:

A key excerpt from the decision, under the heading of Analysis, Findings, Reasons, reads:

I am not granting the severance or the variances. The first part of these reasons considers the physical character tests and the second the protection of the natural environment policies in the Official Plan. The success of the Long Branch Residents Association (LBNA) lies in the fact that they understood that both are interrelated. I find I do not need to consider OPA 320 nor the Long Branch Character Guidelines in applying the tests. If I did, the outcome would be the same.

A previous post highlights an enjoyable three-hour walking tour that I recently engaged in, in Midtown Toronto, as a visitor from Stratford, Ontario. 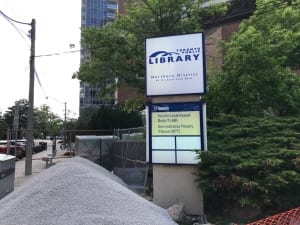 At the above-noted post, some reflections, which are also shared in the text that follows below, were highlighted regarding the work of the Toronto Local Appeal Body, as it relates to the wider topic of land use decision making in Ontario. The text, with minor changes, reads as follows:

A recent post, regarding the larger context within which land use decision making in Toronto and elsewhere proceeds, is entitled:

When I arrived (in the course of my recent walking tour) at the Northern District Branch of the Toronto Public Library, I was pleased to realize that this branch and the Toronto Local Appeal Body (TLAB) share the same address, 40 Orchard View Blvd. 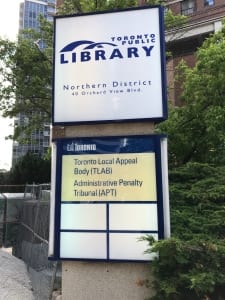 Recently, I have not been following Toronto Local Appeal Body (TLAB) decisions as closely as I did when I lived in Toronto. Nonetheless, I have a strong interest in ongoing updates related to land use decision making at TLAB hearings.

Currently, I can only speak in general terms, as an observer vaguely familiar with details and trends related to its ongoing work. This I will say, however: The TLAB sign that I observed, at the Toronto Northern District branch of the Toronto Public School Board, warmed my heart.

To state the matter succinctly, the Toronto Local Appeal Body represents an instance when the rhetoric, concerned with citizen input regarding planning matters, is actually quite closely aligned with the reality.

TLAB is a strong source of inspiration for me, to state the matter succinctly.

I await word regarding some Divisional Court decisions, related to previous TLAB decisions, which will determine what direction land use decision making proceeds in Toronto in the years ahead.

Memorial text for Reverend Malcolm A. Campbell, D.D.; we owe many thanks to... 58 Wheatfield Road in Mimico has now been designated under the Ontario Heritage...
Scroll to top