Waves wiped out a house at the Lake Ontario shoreline and swept out a family, at 535 Lake Promenade in Long Branch, on March 13, 1952; can you help a family member recover details? 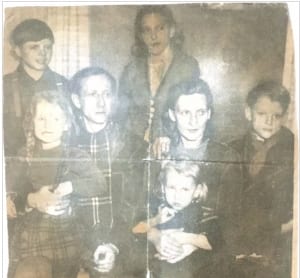 Caption: Recent arrivals from Germany, the Kubart family lost furnishings in back bedroom of frame house which was swept away by waves at 535 Lake Promenade, Long Branch. With Mr. and Mrs. Kubart are their children (in front) Annelie, 5; Ursula, 3; Arno, 7; (at back) Wolfgang, 14; Ingrid, 16.

The current post will serve to set the scene. In posts that follow, I will share valuable information, from several people that I’ve contacted, that provide some answers (we are hoping more will follow, from site visitors) to questions Liesa de Groot asks in her message, which reads:

This is a wonderful site with much information that has given me a light of understanding to some of my mothers lost history so I thank you so much for the time and effort of putting this site together.

From an old news article on a storm preceding Hurricane Hazel that washed my mother, her family and their home into Lake Ont, I am able to track down mothers address was 535 Lake Promenade. However I cannot find anything that confirms this address existed. My mother was only 3 at the time but indicates they lived in Long Branch so I believe it may have been one of the many cottages wiped out in the 1952 storm, but the year is an estimate as the newspaper article has no date. Is there any information out there to help me attempt to verify exactly where her family lived and any more details that may be out there?

Her family were new immigrants to Canada that fled West Germany during the Russian invasions following WW2. They scraped enough money together to afford the purchase of their first home in Long Branch, a small house but it worked. This storm was just a glimpse of the hardships that the family endured and they were so thankful to be alive, the discussions were silenced for coping reasons. As a young child’s interpretation, mother remembers the house rocking like a boat and describes a boulder in the living room (which we believe the house eventually crashed into collapsing a wall that made it appear that it was in the living room). She remembers later living at The Salvation Army and her parents being ever so grateful to be taken in somewhere until they got back on their feet once again. Other than that there is no other information of the short time they spent in Long Branch, what ever happened to the property or even where exactly it was located. Its a piece of her history lost that I would love to offer her some clarity on, even a small amount.

I do have the news article if it is of any interest to your site I can forward it along.

Again I thank you for the knowledge I have gathered from this site and you never know, maybe someone even remembers this family in the small community it was.

Liesa de Groot has sent me the March 24, 1952 Globe and Mail article

Liesa has subsequently sent me the above-noted article.

The article did not have a date but with help from one of my contacts (I’ve built up a network of contacts over the years, with regard to local history in Long Branch and elsewhere) I was able to determine that the article is from the March 24, 1952 Globe and Mail.

The events that led to loss of the Kubart family home, and of the family’s possessions, occurred on the night of March 13, 1952.

If you have a subscription to the Toronto Public website, you can read the article, which is accompanied by many photos (whic h have been copied, however, without retention of the original halftones) from the article.

In a subsequent post, I will share links to archival articles from the Globe and Mail and Toronto Star describing the extreme weather events that occurred on Lake Erie and Lake Ontario in March 1952.

The photo at the top of the current post is from the article that Liesa de Groot sent me as a PDF file.

I much appreciate Liesa’s comment about the quality of this website and the time and effort spent in putting it together. The site is a team effort in which many people – in this case definitely including Liesa herself  – are key players.

Working together, we can get much of value done. Information from contacts, site visitors, and people I interview are key resources that enable the website to perform a useful service.

I have written extensively about the Second World War. I was six years old, newly arrived in Canada with my family and living in Montreal, when the events depicted in the 1952 Globe article occurred. Our furniture in Montreal initially featured wooden shipping crates, from our journey across the Atlantic, which served many useful purposes. My parents originally left Estonia as refugees, travelling across the Baltic Sea in separate boats, in September 1944.

The text from the article, by James Hornick, reads as follows below – but please note, I have modified the quotations so they are presented in plain English.

In the original text, which can be characterized as an evocative piece of literary nonfiction, the new Canadians are quoted in a way that seeks to convey their German accents. In this particular circumstance, I find such an approach to reporting irksome, for which reason I have opted for my plain English version.

I have also written the title in sentence case as it’s easier to read than the former convention of capitalizing all words (articles such as a, the, and of excepted).

The reporter implies the husband made the decision to bring his family to Canada. It’s possible, however, I would note, that it was a joint decision also involving the wife and possibly other members of the family.

You can read the original version of the article here:

My modified version of the Glove and Mail text reads:

A thoroughly exhausted family of seven sat in bewildered silence yesterday afternoon while a Sunday school class sang three lusty choruses of Yes, Jesus Loves Me. Heinrich Kubart, his wife and five children were completely oblivious to the joyous discord. They were so close to nervous collapse that none could sit at ease. Conversation seemed pointless and painful.

There was a time, just a few months ago, when the Kubarts could relax and laugh. Yesterday, in the austere Salvation Army citadel at Long Branch, happiness was a memory. In one shattering blow all their new-found possessions, a home, furniture and clothing, had been wiped out.

Heinrich Kubart is a 45-year-old German immigrant of medium build, long jaw and quiet manner. He came to Canada eight months ago from Arnsberg, in the Dortmund region of West Germany. He brought with him his wife, daughters Ingrid, 16; Annelie, 5; and Ursula, 3, and sons Wolfgang, 14, and Arno, 7.

When the Kubarts disembarked at Halifax they possessed $500 and a fleeting acquaintance with the English language. In Arnsberg, Heinrich Kubart had been employed in a factory manufacturing synthetic rubber. In Canada, his English would have to improve before he could claim a good-paying job. “We come to Toronto,” he said. “We have no friends but we hear about Toronto. We have little bit money and we get along.”

Heinrich obtained employment as an orderly at the Ontario Hospital on Queen St. His family moved into a few bare rooms. They stretched their budget and counted the coppers until they had scraped together $800.

“We find house in Long Branch,” said Mrs. Kubart. “Five rooms cottage. Little bit close to lake, but it is house of our own.”

The Kubarts moved in on Nov. 15. They paid $64 a month, $50 to reduce the mortgage and the balance in interest and taxes. Their home was at at the 535 Lake Promenade.

But on March 13, misfortune called at the back door. During one of Lake Ontario’s periodic storms, waves broke heavily against the back wall. An entire bedroom was wrenched loose from the building and swept into the lake.

We lose bedroom suite,” said Mrs. Kubart. “But nobody hurt. We happy.”

Most of the debris had been cleared when, at midnight, another storm visited the ill-fated home of the Heinrich Kubarts.

“We was asleep,” Kubart said. “About midnight the windows cracked. Glass all around. The roof cracked. Then the walls. All around is water. Maybe 10 inches. The wind make bad noise. The house shake.”

Kubart rallied the family, attempted to soothe the crying children and herded them toward the back door. By this time, pebbles, rocks and boulders were showering through the gaping hole in the back wall.

The father led his wife and children through ankle-deep water up Lake Promenade. The fury of the storm was increasing. Their house was by now battered off its foundation. Clothing and furniture were buried in debris and soaked with spray.

“We try and get hotel room,” Kubart said. “All full up. We call police. We call fire house. We have no friends. Then some people take us here. We sleep on floor and chairs. People are good.”

The Salvation Army provided makeshift accommodation for the first night. All day Heinrich Kubart, his wife and five children huddled in the assembly hall, their reverie broken only by the occasional appearance of a Salvationist with fruit and candy, and by the next chorus of Yes, Jesus Loves Me.

The cutting down of large portions of the great forests of Etobicoke Township, starting in the time of Colonel Samuel Smith (the first European settler in Long Branch) and continuing after he had passed away in 1826, resulted in serious flooding problems along Etobicoke Creek beginning about 1850.

Engineering efforts involving the westward extension of Lake Promenade also played a role in setting the stage for flooding along the mouth of the creek, as outlined at a previous post entitled:

The fact that houses were built on the floodplain of the creek, and in some cases very close to shore, meant that inevitably, when an extreme weather event occurred the results would be catastrophic. It is fortunate that during the flooding in 1952 two years prior to Hurricane Hazel, no lives were lost.

In the era of the current climate crisis, flooding during extreme weather events remains an ongoing major concern.

Sept. 10, 2019 edition of The Brief, from Friends of Canadian Broadcasting History of Amsterdam includes lethal wartime role of Amsterdam’s police
Scroll to top