The current post highlights the fact that news reporting, as at front page of March 24, 1952 Toronto Daily Star, demonstrates features of gangster literature.

Recently I’ve been reading studies by Geert Mak and James C. Scott, which has prompted me to think about the manner in which stories about history – including about current history – are presented and preserved.

An excerpt from article by Geert Mak at his website, entitled “2017 as a year of truth,” reads:

The sociologist Karl Erikson described already in the seventies, the phenomenon of ‘collective trauma’, an event – the closure of a mine, a reorganization, the end of the classic village and farmers life – which, apart from all economic and material consequences, meant a deep break with relationships and routines that had defined life there for generations. Without these social anchors people struggle to find again meaning and purpose in their lives, they feel often totally disoriented and disconnected, and their deepest feelings can often be translated in four words: “Please, let’s go home.” “Let’s go home, back to the good old days.” And they follow every leader who promises to bring them home again. But there’s no home anymore.

There are many possible frames to choose from – many choices are available to us – regarding how we position a given assortment of data related to events, that have occurred in the past.

As well, access to the past requires a person to imagine it – to picture history, in her or his mind.

It’s also a feature of storytelling that the past, that we conjure up through imagining it, is available to us solely through the present moment, which serves as our sole entry to the past. 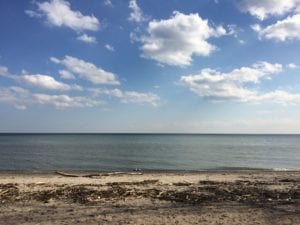 Beach at Marie Curtis Park in Long Branch. The view is from a location to the west of the corner of Lake Promenade and Forty Second Street. Jaan Pill photo.

Writing about the past, assuming a writer is working with evidence, involves the writing of nonfiction – sometimes the term that is used is creative nonfiction.

When we view the present moment, the past, and the future, our imaginations are at play.

Both fiction and nonfiction call upon the imagination. Nonfiction and fiction blend into each other. A borderland exists which is a blending of the two.

Each generation access history anew; history is accessible only in the present moment

We keep history alive when we access it, share it, talk about it, visit the sites where history has taken place and is emerging.

We keep history alive when we preserve artifacts, buildings, structures and cultural and physical landscapes that have a history attached to them.

A totalitarian regime, imbued with whatever ideology, makes it a practice to erase all traces of pre-regime history. 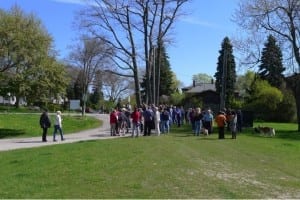 Long Branch Jane’s Walk, May 6, 2012, began at mouth of Etobicoke Creek. The photo shows  southeast corner of Marie Curtis Park. In years past Lake Promenade extended far to the west, past the point where the roadway currently terminates at Forty Second Street. Peter Foley photo

As part of a post I am working on, regarding 535 Lake Promenade in Long Branch, I am picturing the past by reading archival Toronto newspapers from 1952, including the following front page from the Toronto Daily Star:

A photo from the above-noted front page shows a boy emptying water from a rubber boot while he stands in front of the house where he had been living until enormous storms, extreme in their power, hit Lake Ontario. The photo displays a sign, affixed to the house, which reads, “These premises are CONDEMNED.”

The caption reads: “LAKE PROMENADE home of George Dick, 9, was condemned as a result of Saturday night storms which swept along a 300-mile stretch of Lake Erie, Lake Ontario shores.”

Walking west along Waterfront Trail during May 6, 2012 Jane’s Walk in Long Branch. The walkers are heading in direction of Applewood Creek where Lake Promenade used to terminate. The trail is where southern branch of Etobicoke Creek used to flow – in a direction parallel to trail, and south of it – on its way to Lake Ontario. Lake Promenade ran parallel to pathway where people are walking (and close to shoreline on left of photo). Mike Foley photo

The caption for a second photo, which features extensive retouching, so that the forms are clearly outlined, reads: “ON DON MILLS Road, near Buttonville, a lineman checks wires attached to one of 36 consecutive poles which were pulled down by winds which reached velocity of 60 miles-per-hour. The storm penetrate 50 miles inland, caused two deaths, flooded town.”

I thought about this when I was working on a recent post entitled Cracked: Outwitting the Back Pain Industry and Getting on the Road to Recovery (2017), which among other (more inspiring) topics deals with the marketing of opioids.

At a previous post (please see link at previous paragraph) about Cracked (2017), I have highlighted a series of news reports including the following selection:

In dozens of interviews, doctors, researchers and Australians whose lives have been upended by opioids described a plight that now stretches from coast to coast. Australia’s death rate from opioids has more than doubled in just over a decade. And health experts worry that without urgent action, Australia is on track for an even steeper spike in deaths like those seen in America, where the epidemic has left 400,000 dead.

A Sept. 13, 2019 Associated Press article is entitled: “NY finds $1B in hidden transfers by family behind OxyContin.”

I have been particularly interested to read Amsterdam: A Brief Life of the City (2001) by Geert Mak, and An Island in Time: The Biography of a Village (2010), by the same author.

In the early 1900s, Amsterdam conservationists helped preserve the city’s remaining canals; however, by then, its much-admired maritime vista had disappeared (thanks to a new railroad station)

An encyclopedia.com entry regarding Geert Mak refers to details about the author’s career:

That is, the author has a background in law, university teaching (metropolitan studies), editing, and journalism. Such a strong background comes across in his writing.

I became interested in the history of Amsterdam and the Netherlands after a brief visit to Amsterdam in August 2018.

Initially, I began to read about the history related to Amsterdam’s impressive bicycle culture.

Recently I’ve also been reading about events – which, among other things, bring to mind the the world history of genocide – in Amsterdam before, during, and after the Second World War, as described by Mak in Amsterdam: A Brief Life of the City (2001).

A key point that Mak underlines (p. 267) in Amsterdam (2001) is that “In reality, proportionately more Jews were deported from the Netherlands than from any other Western county” during the Second World War.

Mak notes, as well (pp. 265-66) that while some members of the police service in Amsterdam found ways to thwart the deportations of Jews, on the whole the police acted in close alignment with the goals of Nazi authorities occupying Amsterdam. “Of the 80,000 Jews in Amsterdam,” Mak notes (p. 264), “only 5,000 were alive at the time of the Liberation in 1945. In total, 98 deportation trains with more than 100,000 people were able to leave the Netherlands without a single incident.”

The author also describes how, during the final stages of the war, deliberations among the Resistance in the Netherlands proceeded with regard to who the police chief of Amsterdam would be, once the war was over.

The police chief who was chosen, after a previous candidate was killed in a traffic accident, had a prewar track record that ensured that, postwar, the Amsterdam police would not be held to account, for the close collaboration (with a few exceptions) of members of the police service with the Nazi occupation.

According to Mak, the decision set the tone for political life in Amsterdam until the 1960s.

“We live in a narco-state”

With regard to more recent history of the Netherlands, a July 16, 2019 Guardian article is entitled: “Dutch police are being infiltrated by criminal gangs, report says: Dozens of officers suspended or sacked recently for corruption may be ‘tip of iceberg.'”

In Amsterdam, the paper said, a 55-year-old officer was suspended and arrested last week in the seventh such incident since May. Officers in the Dutch capital have been sacked or suspended for possession of hard drugs, forgery, tampering with official computers and divulging confidential information.

The report said the series of recent sackings and suspensions was “probably the tip of the iceberg”, with sources stressing that investigators have “a large number of other live inquiries” on which they cannot currently work due to lack of capacity.

Jan Struijs, the chair of the police union NPD, told AD the police needed to do far more to improve officers’ resistance to “surreptitious” overtures from organised crime, which take place “at all levels” of the profession.

A Sept. 19, 2019 Guardian article is entitled: “‘We live in a narco-state’: murder of Dutch lawyer prompts fear and fury: Lawyers in gangland cases given emergency protection after unprecedented killing.”

A Guardian Feb. 20, 2018 article (that is, from more than a year earlier) is entitled: “Netherlands becoming a narco-state, warn Dutch police: Officers say many victims do not report incidents and organised gangs have a free rein.”

Story of Amsterdam has many facets

James C. Scott (1972) argues that corruption, like violence, must be understood as a regular, repetitive, integral part of the operation of most political systems

Among previous posts that come to mind, regarding corruption, is one entitled:

The above-noted books by Geert Mak, about the history of Amsterdam and the history of a small village in the Dutch countryside where the author grew up, offer an in-depth view of history.

News reports, while they bring much of value, will not as a general rule provide the nuance, or the level of value, that is available in an in-depth, book length study, such as by an author of the calibre of Geert Mak.

By way of concluding the current post, I want to say that the recent-years news reports about Amsterdam, referred to above, stand in strong contrast to the inspiring bicycle-transportation infrastructure that has been developed in Amsterdam and across the Netherlands.

Such a community-driven development began in the 1970s, as I understand, in opposition to what can be described as a car culture that is inherently dangerous for pedestrians and bicyclists.

An Oct. 3, 2019 Lawfare article is entitled: “The Constitution Says ‘Bribery’ is Impeachable. What Does That Mean?”

The Ukraine scandal began in the spring of 2019, with a series of contacts between Trump’s personal lawyer, Rudy Giuliani, and Ukrainian officials. In mid-July, Trump made the decision to withhold nearly $400 million in aid to Ukraine that had already been appropriated by Congress. The White House offered no explanation, except to blame “interagency delay.” A week later, Trump spoke by phone to the recently-elected Ukrianian president Volodymyr Zelensky. The memorandum released by the White House describing that call—which is consistent with the accounts of the whistleblower complaint that first brought this scandal to light—reads like a classic shakedown.

Waves wiped out a house at the Lake Ontario shoreline and swept out a family,... Long Branch Conservation – Update September 2019 from David Godley
Scroll to top