The link below is from an Oct. 22, 2019 article at the Lawfare website, which notes:

Amb. William B. Taylor, the top U.S. diplomat in Ukraine, testified on Tuesday [Oct. 22, 2019] before three House committees conducting an impeachment inquiry into President Trump’s efforts to have the government of Ukraine interfere with the 2020 U.S. presidential elections.

An Oct. 22, 2019 CNN article is entitled: “US’ top diplomat Taylor was told Trump wanted aid withheld until Ukraine said it would investigate Biden.” 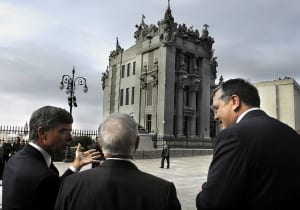 The photo is from an Oct. 23, 2019 Lawfare article entitled: “What Bill Taylor’s Testimony Adds to the Ukraine Story.” The caption reads: Then-Ambassador to Ukraine Bill Taylor and Ukrainian Minister of Defense Anatoliy Hrytsenko show Defense Secretary Robert M. Gates some of the local architecture in Kyiv, Ukraine, Oct. 22, 2007. Defense Dept. photo by Cherie A. Thurlby.

(CNN) The Top US diplomat in Ukraine Bill Taylor testified Tuesday that he had been told President Donald Trump would withhold military aid to the country until it publicly declared investigations would be launched that could help his reelection chances — including into former Vice President Joe Biden, according to a copy of Taylor’s opening statement obtained by CNN.

“During that phone call, Ambassador Sondland told me that President Trump had told him that he wants President Zelensky to state publicly that Ukraine will investigate Burisma and alleged Ukrainian interference in the 2016 US election,” according to the testimony.

Sondland told Taylor he’d also made a mistake earlier by telling the Ukrainian officials that a White House meeting with Zelensky “was dependent on a public announcement of the investigations,” Taylor said.

“In fact, Ambassador Sondland said, ‘everything’ was dependent on such an announcement, including security assistance,” Taylor testified.

He testified that Trump wanted Zelensky “in a public box” by making a public statement about ordering the investigations.

An Oct. 23, 2019 Lawfare article is entitled: “What Bill Taylor’s Testimony Adds to the Ukraine Story.”

Taylor’s testimony may not seem like a game-changer. It adds few new facts to what was already known about Trump’s actions surrounding the July 25 telephone call – conduct to which Trump himself has already admitted and that he and his supporters continue to defend. But Taylor’s insider account of the manner in which he saw the Trump administration implement U.S. policy towards the Ukraine policy, along with the motives he credibly attributes to Trump and his close advisors, are damning. They cut straight through any pretense that the Trump administration’s actions reflected valid U.S. policy interests or were motivated by any objective other than the president’s own political advantage. Moreover, Taylor is unsparing in describing what the consequences for broader U.S. foreign policy interests will be if such self-interested conduct goes unabated.

In this sense, Taylor’s testimony puts the questions raised by the House’s impeachment inquiry and their consequences into even sharper relief. Now it remains for Congress to decide how it will respond.

Trump has denied that an investigation of Biden was a condition for releasing military aid as a quid pro quo. But on Tuesday, the senior U.S. diplomat in Ukraine at the time, Ambassador William Taylor, starkly contradicted the president, saying that Trump had demanded that everything Zelenskiy wanted, including the aid and a White House meeting, was conditional on a public vow that he would open an investigation.

Taylor also detailed multiple previously undisclosed diplomatic interactions between Trump’s envoys and senior Ukrainian officials in which the president’s demand to investigate the Bidens in exchange for American aid was clear.

The continued flow of high-tech U.S. weaponry is seen as essential to the survival of the Ukrainian government, which has been mired in a long-running civil war with Russian-aligned separatists in the east of the county. In 2014, masked Russian troops took control of Ukraine’s Crimean Peninsula. Russia later annexed it, provoking Western sanctions against Moscow.

Taylor detailed the strategic significance of Ukraine, underlining that he viewed Trump’s decision to delay military aid as one that put lives at risk.

In one of the most dramatic passages of Taylor’s opening statement, he describes a visit to the eastern front of Ukraine’s civil war, where he stared across a river at Russian-led military forces. He relayed his unease as the Ukrainian military commander thanked him for military support Taylor knew was being delayed.

“Over 13,000 Ukrainians had been killed in the war, one or two a week,” Taylor testified. “More Ukrainians would undoubtedly die without the US assistance.”

Taylor bookended his opening statement by emphasising the importance of US support for Ukraine and the heroism of the Ukrainian people, who he said were standing up to Russian aggression and yearning for a “more secure and prosperous life”.

Opening statement of Marie L. Yovanovitch to House of Representatives permanent select committee on intelligence, committee on foreign affairs, and committee on oversight and reform, Oct. 11, 2019

I am highly impressed with the sense of dedication and command of language evident in recent statements by Marie L. Yovanovitch, Fiona Hill, and William B. Taylor.

These qualifications aside, the sense of dedication and facility with language, evident in statements by the above-noted diplomats, is highly impressive and inspiring.

With regard to storytelling associated with the ongoing impeachment inquiry, I am reminded of observations by James C. Scott regarding corruption as a regular part of political life in specified circumstances.

We can add that storytelling, which entails a process of social construction, and is frequently concerned with a divergence in responses to ambiguous communications and situations, is at times based upon evidence, and at other times proceeds (highly effectively, depending on the audience) in the absence of it.

I am reminded, as well, of the relevance, when we seek to gain understanding of military history and contemporary news events, of the metaphors, and conceptual frameworks, around which gangster and espionage literature is constructed.

As with other histories, Mennonite history has been addressed in many ways October / November 2019 Long Branch update from David Godley
Scroll to top