The following text is from David Godley of Long Branch (Toronto not New Jersey). I’ve converted his Word File regarding 65 Fortieth St. to PDF:

His attachments also include the jpeg image on the right. 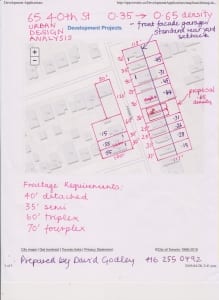 The Ontario government says it has decided against pursuing a “top-down approach” and will not radically redraw the province’s regional governments after a review process that took months.

Municipal Affairs Minister Steve Clark announced Friday that instead of acting on a menu of sweeping changes – including Mississauga Mayor Bonnie Crombie’s plea that her city become independent of Peel Region – Queen’s Park will offer up $143-million for municipalities to find new ways to lower costs and improve services.

Many in Simcoe, York, Waterloo, Peel, Oxford, Niagara, Muskoka, Halton and Durham are breathing a sigh of relief. Too late for Toronto where public participation is at a low ebb most notably at the Neighbourhood Level. Fortunately for Long Branch our Councillor has been supportive of efforts to conserve its character and helped launch the Long Branch Character of Guidelines which so far are being studiously ignored especially by the Committee of Adjustment. We will see what TLAB make of them in decisions on 65 40th and 77 35th.

About 20 years after amalgamation, Public Participation in Toronto governance is relegated to the bottom rungs of Arnstein’s ladder –  amounting to non-participation and tokenism.

View and enjoy the linked video (5:05 minutes) explaining Arnstein’s Ladder of Public Participation. copy to browser if interested. Studied this in early 70s at Sheffield University!

19 33rd Reduction in frontage for severance and variances. Small increase in density for one single and about 0.45 for the other.

68 24th Small reduction in frontage for severance and variances. Small increase in density for one single and about 0.45 for the other.

39 Fairfield. Illegal apartments increase from 4 to 6. Already been approved for more apartments by OMB against City and Neighbours but different design.

16 Atherton. New house on wide lot density 0.35 to 0.43 which does not reflect traditional character.  (postponed for rationale)

9 38th Street. The Divisional Court judge decided on January 31st 2019 that there was enough evidence for one of several items to go to a full hearing – procedural fairness. The issue was how a Request for a Review should be answered after a TLAB decision was overruled. A hearing is expected within months.

11 Stanley was to go before a judge on February 19 about a leave to appeal to the Divisional Court on the legal points of a decision which refused the applications. However further discussions are taking place.

15 Stanley has been the subject of a Review Request and leave to Appeal to the Divisional Court. The resident who appealed both 11 and 15 and acted independently winning both decisions at TLAB has requested that TLAB change their rules not to allow both actions to be done simultaneously. The proposal was well received by TLAB at a business meeting. A classic strategy in legal matters where it is a well resourced party against a not so well resourced party (ie personal finance) is to wear down the opposition.

If you wish to look at all the material online go to “Development Applications Toronto” then check “Committee of Adjustment” “Ward 3”  “Search” and follow the cues. However the number of applications in Ward 3 has outstripped the capacity of the Applications Information Website and you cannot view the whole list of applications together.

Previous “Updates” can be found on preservedstories.com a major blog site run by Jaan Pill, formerly of Villa Road.

Submissions on applications need to be in to COA by 3pm on the Thursday before the COA meeting for inclusion in the package that is given to COA members. Submissions before 10am on the day of the hearing will be considered. E&EO. Please feel free to correct, add to or forward information Also feel free to circulate.

Re: Focusing on Building Design Improvements

Summary Toronto is a global centre for architectural, planning and design talent. However, the city hasn’t always tapped into these vast resources as effectively as we could. With these initiatives and several others I am interested in pursing, I hope to unlock and activate architects, landscape architects, planners and students in these disciplines to help build a more beautiful and engaging city. This summer, my office along with Deputy Mayor Bailao and Councillor Bradford hosted a meeting of international talent from the development, architecture and planning communities to help generate ideas to shape a city we can be proud of.  We learned from this meeting that we must consider design in our policy development and procurement and, employ open and transparent competitions whenever possible. The international design competition for the Etobicoke Civic Centre and the Design Review Panel were pointed to as an examples of where the city got it right. With these recommendations in this letter I hope we can expand on our successes and build a culture within the City that embraces the best this city and the world have to offer.

The Design Review Panel represents some of Toronto’s leading designers, architects and landscape architects who volunteer their time to help guide significant developments in our city.  We must review the Panel’s mandate and give the experts on the panel a chance to regularly report publically so that we can learn from their expert opinions.  Finally, we know that we must look for ways to add density to low-rise residential areas in a way that will enhance neighbourhoods and be embraced by neighbours. To do this effectively we have to ensure new zoning regulations and guidelines are aesthetically exciting as well as functional. I am calling for an open ideas competition to gather the ideas from the public and particularly students, young designers and experts to help us shape the new, more permissive policies Council will consider.

1.City Council direct the Chief Planner and Executive Director of City Planning include in its upcoming report to the Planning and Housing Committee on the Missing Middle, a plan for a public design competition in order to solicit ideas that could help shape policies for more permissive zoning in areas designated as neighbourhoods in Toronto’s Official Plan.

2.City Council request the Board of CreateTO work with the CEO of CreateTO in order to employ open and international design competitions for major and transformational projects in which it is the lead developer.

3.City Council direct the Chief Planner and Executive Director of City Planning, as part of existing and ongoing consultations in recently developed higher density neighbourhoods, include questions that solicit feedback on the cumulative impact of design guidelines and policies on the daily lives of residents.

4.City Council invite the Chair of the Design Review Panel to provide an annual letter to Planning and Housing Committee to summarize any relevant observations, suggestions and themes in the applications the panel has reviewed.

5.City Council direct the Chief Planner and Executive Director of City Planning to work with the Chair of the Design Review Panel to review the mandate of the panel and make recommendations for revision, and report to the Planning and Housing Committee in Q2 2021. John Tory Mayor of Toronto