Those who face severe food insecurity (as I did years ago) often miss meals, or reduce their food intake due to a lack of food

What you read at this website has to be paid for by somebody. The Ontario Teachers Pension Plan, along with sundry other funding sources available to retired citizens, covers my pay as a blogger.

I’ve been retired since 2006 from a career, extending over thirty-plus years, as an educator. I wasn’t originally planning to become a public school teacher. For a variety of reasons, before that I tried a number of jobs including working as a labourer and truck driver in Toronto. I’ve also worked extensively in the food services industry. 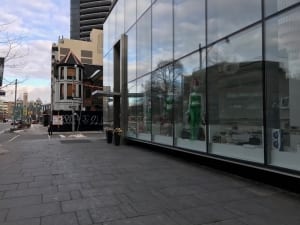 In the late 1970s, I worked as a labourer at a construction project at the northwest corner of the Four Season’s Hotel on Bay north of Bloor. No trace appears to remain of the hotel restaurant located at this corner of the building forty years ago. Jaan Pill photo

As a university student, I took time off to work at various jobs including as a chockerman on a mountainside logging operation between Terrace and Kitimat in British Columbia; a green chain worker at a sawmill in the B.C. interior; an office worker at an aluminum smelter in Kitimat; and a general labourer at an auto parts warehouse in Vancouver.

Such jobs were part of my education as a writer. I’ve seen the world as it appears from a variety of vantage points, and have fitted myself into lines of work where I’ve had the opportunity to get a good sense of how some people view other people, in accordance with the work that different people do. From my own perspective, everybody has the same job, which is breathing in and out, night and day. In that respect we all have the same job, and on that level we are all the same. 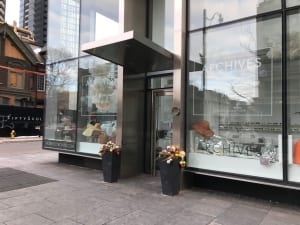 Along the way, before I became a teacher, I was well acquainted from time to time and for a variety of reasons, with food insecurity. I was always aware, however, that such a situation was in my case temporary. And as it turned out, one day I left behind my days as a labourer, and went to work as a public school teacher. When I was younger – in my younger years – the idea that I would someday make a living as a teacher would have been unimaginable, but as it turned out I fell into teaching and made a good landing. 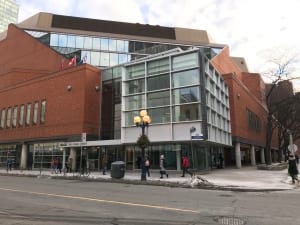 On a recent Toronto visit, I checked out a biography of Tyrone Guthrie, which I knew was available by Stack Request at the Toronto Reference Library. Jaan Pill photo

I worked as a construction labourer in Toronto in the late 1970s on one of many repurposing projects that have taken place, over the years, at the Four Seasons Hotel on the east side of Bay north of Bloor. That was interesting work. The person in the role of foreman (or maybe he was site superintendent – these details escape me now) who I think was from Germany, was always telling stories. One time he talked about his salary, which came to about $35,000. With inflation taken into account, that’s about $125,000 in today’s Canadian dollars.

In those days on such a project work crews were not required to wear hard hats, safety vests, or steel-toed boots.

When I was working at the site, I met a really good carpenter. He was really good at his craft. I liked the way he went about his work, which I could tell he’d been performing for many years. What a good guy he was. He was methodical, focused, attentive to every detail. I learned many things, just from observing him at work. Just by going about his work, he taught me many things, which I now apply in my work as a blogger – and, I can add, as a beginner practitioner of mindfulness. 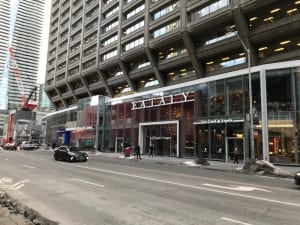 I also had the opportunity to read letters (left lying around at a work station) from the project architect written to various people detailing his concerns about people not cooperating with his desire to get the current Four Seasons Hotel project completed as fast as possible.

When reading the letters, I stopped to ponder about timelines. Within a decade after that time at the job site, in my volunteer work I had become strongly focused on principles of project management, with a particular focus on logistics involved with getting specified things done within specified time frames. That had to do with the organizing of national conferences, not the repurposing of hotel spaces. However, the underlying principles of project management are applicable across all disciplines and projects.

At the job site, one of the crew was kind to me one day. I was working outside in sub-zero weather, freezing and feeling miserable because the cold was wearing me away and I was not warmly dressed. I was losing my strength. He said, “Go inside.” That was among the key things I remember, over forty years later, about my work as a construction labourer. I felt a sense of relief, of gratitude, when I was inside once again. That sense of gratitude is with me, even now. The person took one look at me and told me to go inside. 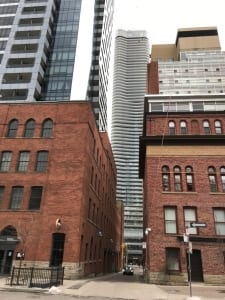 If there is one thing that moves me, speaking for myself, it is kindness, which has no commercial value and brings no obvious benefit to the person who chooses to be kind.

I was reminded about my days as a labourer at a Four Seasons Hotel construction site because I was in Toronto recently in my role as visitor from Stratford, and had time to view the Four Seasons site, in its most recent iteration.

I’ve been the recipient of unexpected kindnesses (often just a small gesture, or an acknowledgment of shared humanity) in my earlier years, quite aside from the story I have just recounted. Kind people, in ways big and small (the small ways also mattered hugely) have changed the trajectory of my life. They gave me strength and kept me moving forward. Small things, that come and go in a flash, can have tremendous significance depending on what is happening in a person’s life. Those people are all gone now. Gone with the passing of the years. A moment’s act of kindness, that can take a second or two, it stays with a person for life.

Since 1975, I’ve watched with interest the periodic waves of repurposing that have occurred, over the past forty-five years, at the Manulife Centre on the south side of Bloor east of Bay.

I had an opportunity, on my recent visit to Toronto (a city characterized by tremendous energy and diversity) to savour very good, freshly made pizza at the newly opened and aptly named Eataly, which now very productively occupies a great deal of space at the Manulife Centre.

Clearly, much thought and planning has gone into the launch of this facility. I like the way the food service and purchase functions are spread through the layout of the site. The graphic design and interior design, and uses of available space, all work together really well. Eataly staff are everywhere, serving vital food preparation and social functions. There’s an excitement in the air – an enjoyable ambience – a great place to visit! 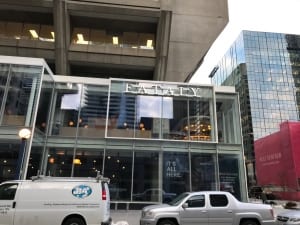 Food insecurity in Newfoundland and Labrador

A Feb. 17, 2020 CBC article, entitled “Why is food insecurity such a big issue in N.L.? 1 in 8 Canadian households are affected by food insecurity, according to U of T,” has prompted me to write the current post.

Another common misconception is that food insecurity only affects people receiving social assistance. Tarasuk [Valerie Tarasuk is a professor in the department of nutritional sciences at the University of Toronto and a leading researcher on food insecurity in Canada] says this isn’t the case — food insecurity can affect people from all walks of life.

“The rise we’ve seen in Newfoundland and Labrador in terms of food insecurity rates not only suggests that there is increasing vulnerability amongst people on income assistance — but also that more people in the workforce are struggling to manage,” she said.

Tarasuk says food insecurity isn’t a food problem but an income problem. Food is available, but far too many Newfoundlanders and Labradorians can’t afford to buy it.

CBC NL has collaborated with Food First NL, a not-for-profit organization that works to improve access to food, for this year-long series that explores the problems people struggle with to access food.

The current post is also part of a series of posts I’ve written since learning, some time back, that half the households in Perth and Huron Counties (I live in Stratford, which is in Perth County) make less than a living wage:

With regard to food, I feel at home these days with a routine where I eat during an eight-hour window of food options, and fast during the other sixteen hours. It’s a routine I’ve been following since writing a post entitled:

For breakfast, I drink black coffee. Later in the day I have coffee with milk and honey.

I always follow the evidence, whatever the topic, as best as I can: