I live in Stratford having previously lived for forty-three years at locations across Toronto – including at rooming houses (in the mid-1970s), apartments, condos, an artist housing co-op, and twenty-one years at a house in Long Branch (south Etobicoke). 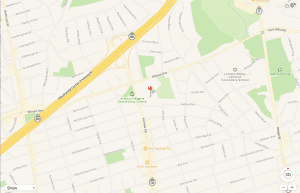 Toronto is characterized by energy and diversity. I learned so many things when I lived there and much enjoy visiting now as a practitioner of reality tourism from Southwestern Ontario.

I remain fascinated with ongoing news related to land use decision making and governance issues across Ontario.

The notice of the proposed sign arrived, as I understand, at Sandy Gladstone’s house only recently.

An excerpt from the message reads:

Respectfully: This illuminated sign must NOT be approved. This is the entrance to a dimly-lit residential neighbourhood, and all efforts must be made to prevent encroachment of the arterial mixed-use retail-commercial illumination levels found on Avenue Road. This is a traffic calming matter as much as anything else.

Starlight illuminated signs pepper the city, and the time has come to slow down their efforts in this regard.

In the case of 200 Ridley Boulevard, Starlight have already caused an affront to this quiet, dark, residential street and entrance to our community.

They have already succeeded at the OMB, despite large community protests, to gain approval to build a 4-storey 30+ unit REIT condo building, atop the existing large grassy and treed play area of this apartment building …. A grassy area that was apparently protected and written into the sale agreement from the Cricket Club, and into the Zoning and Permit approvals, many decades ago ….

….. And now, like so many properties, ( e.g., Lascelles Blvd. ), outdoor soft landscaping areas designed for apartment building trees, grass, quiet enjoyment, and the environment, are being infilled one by one …… and then illuminated …..

There is no need for illumination of this sign …. The sign is already there … . Installed without a permit, across from my house ….. After their last enormous sign that they erected without a permit, on the boulevard, slowly decayed and fell apart over time … .. People know how to discover apartment vacancies without the Starlight illuminated commercial signage on a residential street.

Though I missed the deadline for comments, due to the City’s or Canada Post’s practices, I respectfully believe that the City must consider my remarks, and reconsider approval if indeed approval was granted.

The message is succinct and well reasoned. However, I would avoid extensive use of ellipses. They don’t add to the effectiveness of a message. Their main purpose is to indicate material left out of a direct quotation. In the latter usage, they serve a purpose. In other contexts, they are often a distraction.