As Suzanne Wertheim, linguistic anthropologist, notes: Our linguistic choices can amplify a message. Or they can muddy it, and lessen its impact

I’ve added some photos, because I believe they will make the post more interesting to visit.

The consequences of our actions may be life or death

The thread that follows below is by Dr. Suzanne Wertheim is staying home/washing hands whose Twitter handle is @WorthwhileRandC

Linguist here. It looks like one of our biggest issues in this pandemic is convincing people that: 1. it is deadly serious 2. the consequences of their actions may be life or death. I have some suggestions about how to talk about #COVID19 to help with this message. /1 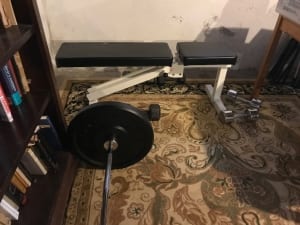 Fitness area in Stratford, March 24, 2020. I’ve been working out regularly at home rather than at Stratford and Toronto fitness centres where I was working out before. Jaan Pill photo

Our linguistic choices can amplify a message. Or they can muddy it, and lessen its impact. /2

1. Always use the phrase “known cases” and not just “cases.” In the US, barely anyone has been tested. By saying “cases of #COVID19”, we make it sound like it is a known quantity. Those cases out there. Those people. /4

But when we say “known cases,” we change the framing. And remind people that THEY or PEOPLE THEY KNOW may be infected. This framing reinforces that we don’t know who is infected, and it is of utmost importance to be careful, because the infected person might be you. /5

2. Make agency explicit. A lot of writing about #COVID19 uses phrasing like “the virus spreads by…” This kind of phrasing hides what linguists call “agency.” Who is the agent of the action? Who is doing the thing? /6 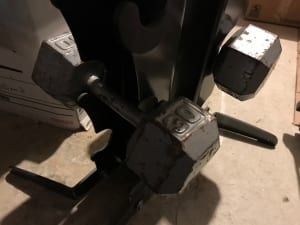 The virus isn’t spreading itself. People are spreading the virus. When we hide agency, it is easy for people to not feel like they are the ones responsible. Even if they are. /7

I love sociologist Robin DiAngelo’s analysis of linguistic agency and Jackie Robinson. People say things like “Jackie Robinson, he broke the color line.” But this framing hides the agency of white people. IT WASN’T UP TO HIM. /8

When we say “the virus spreads,” we are hiding the agency of the people responsible. In the earliest days, it wasn’t clear what responsible or irresponsible actions were. But now that we’re several months in and it’s a global pandemic, it’s clear. /10

So let’s make agency explicit all the time. Instead of “the virus may be spread by…” something more like “You may spread the virus if…” /11 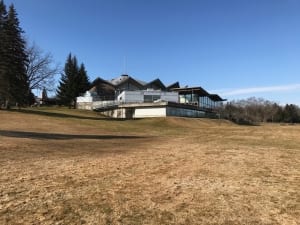 Asa part of my fitness program, I often do high intensity interval training (HIIT) by running (relatively fast sprints with intervals of slower pace between the sprints) in parkland by the Festival Theatre in Stratford. Jaan Pill photo

Which brings me to my last suggestion: 3. Use “you” and “we” whenever possible instead of more third-person words like “they” or “people.” /12

In my anti-bias research and training (my academic and post-academic work), one obstacle I come up against again and again is the mentality of “Not us. Not here. Not now.” /13

My clients and my audiences know they are good people. Racists and sexists and people with bias are bad people. They are those people over there, not here. They are people from a long time ago. Not modern people living now. They aren’t us. /14

But 100% of humans are biased. And if we don’t identify and address that bias, it takes us off course. It makes it hard to align our intentions and our actions. /15

I see people distancing themselves from both their agency – the idea that it’s on them to do the right thing and stay at home – and the idea that they themselves might get really sick and die. Not here. Not now. Not us. /16 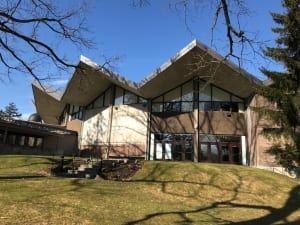 In recent years I’ve written blog posts about the value of linguistic anthropology in enhancing our understanding of phenomena such as schoolyard bullying, a topic I’m familiar with at a practical level as a retired elementary school teacher.

Among such previous posts is one entitled:

When researchers including linguistic anthropologists analyze and publish detailed transcripts of videos and sound recordings documenting schoolyard bullying, we can get a better sense of the underlying dynamics of bullying. That gives us a better picture as compared to just observing various types of bullying and then writing blurbs or general overviews describing what bullying entails.

Linguistic anthropologists have arrived at significant findings, by analyzing on a word for word basis what actually transpires when bullying occurs, for example, among children at play. Many other things that occur in life can be productively analyzed within the framework of linguistic anthropology.

I’ve also written extensively about language usage and agency as it relates to local history and cultures of land use decision making; by way of example, a previous post is entitled: 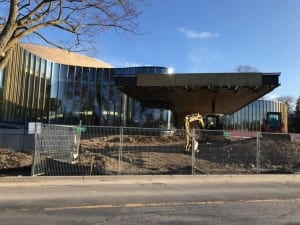 Although the Stratford Festival season has been postponed on account of the COVID-19 pandemic, work has been proceeding at the Tom Patterson Theatre Centre construction site. Jaan Pill photo

When we deal with language usage – that is, with how words are used – we are dealing among other things with power. When language and power intersect, we are dealing with the language that power sometimes speaks, whereby up is down, big is small, and inside is outside.

In other words, power at times speaks its own language, which may strongly differ from everyday usage. Power at times distorts or misuses language – because it’s in the nature of power that, in the absence of checks and balances, it uses language in whichever way it pleases.

A key additional comment, from my vantage point as an observer of local history and land use, is that many people, in academic and non-academic realms alike, are able to position themselves as experts in the use of language.

Often such expertise is positioned as a capacity to analyze language as a tool or weapon directed at the attainment of particular ends.

Speaking for myself, I claim no expertise in relation to language. I do, however, possess a degree of skepticism whenever I encounter a claim that a given person or school of thought has arrived at definitive conclusions regarding how linguistics intersects with politics, or how metaphors undergird or buttress political power.

That said, I’m always keen to read what people who position themselves as experts in these areas have to say. I especially enjoy reading research reports from linguistic anthropologists, as well as reports from anthropologists who study topics also addressed by political scientists. All such research is highly valuable and inspiring.