Lynn and Mike Legge’s backyard on June 15, 2022 in London turned out to be the perfect setting for our most recent MCHS (Malcolm Campbell High School) luncheon. 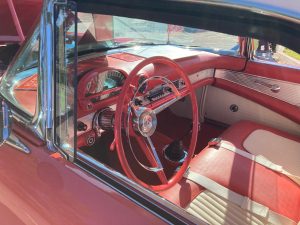 Interior view of car on display at vintage car show in Stratford, Ontario, June 19, 2022. Can you guess what make it is? Check the photos later at this post. Jaan Pill photo

At our picnic we spoke of many things, including the value of Google Maps in finding our destination when travelling by car.

We also spoke among other things about the life span of migrating Monarch butterflies. I learned from an internet search that most Monarch butterflies live only a few weeks but the ones that migrate live for many months! I was really interested to check on this detail at several websites. 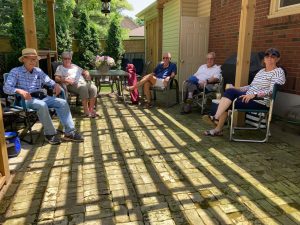 At the World Wildlife Fund Canada website I learned that “Each adult [Monarch] butterfly lives for two to six weeks, except for the migrating generation, which lives up to seven months through the fall and winter.” I checked at a few other sites and learned the same thing. 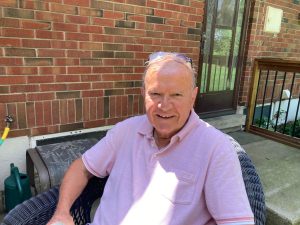 Zen Levitzky (great to have you join us for a picnic, Zen; first-time attendees are always the star of the show!). Jaan Pill photo

It would never have occurred to me to find out this information, were it not for the fact that for a moment, conversation at our MCHS picnic at Lynn and Mike Legge’s backyard turned to Monarch butterflies. Among other things, we talked about their long migrations and the places that have been set aside for them, here and there in Canada, to ensure their journeys to and fro turn out well – or at least as well as can be expected given the climate crisis, environmental degradation, and accelerating habitat loss and species extinctions.

We have plans to have another such picnic, in Southwestern Ontario, at the same place in Woodstock where we met when the COVID-19 pandemic had just begun. Late August or early September are possible dates. 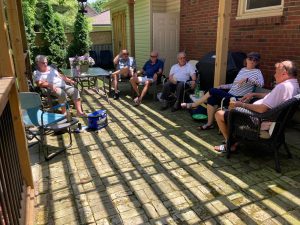 We last met in Woodstock in August 2020:

At a June 7, 2019 MCHS luncheon in Kitchener, we met Tony who graduated in 1972, and Gail who was meeting Lynn for the first time in fifty-five years! Most recent luncheon was in Woodstock

Before the Woodstock picnic, however, we’ll aim for a picnic as well in Toronto, maybe late in July or early or mid-August. A possible place to meet might be Cliff Lumsdon Park by Lake Ontario where we’ve met in the past.

Here’s a post with a photo from Cliff Lumsdon Park:

At the current post, I’m pleased to share a few photos from our June 15, 2022 get together – and also from a vintage car show I attended with my wife and daughter in Stratford on June 19, 2022.

I have a few photos to share, at the current post. In order to share them, I need to write a bit of text. So, what should I write about? 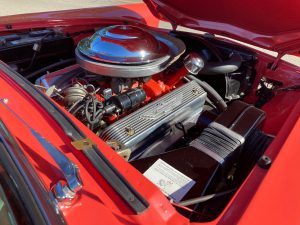 Here’s the engine of the vintage car that I’ve chosen to highlight at the current post. Jaan Pill photo

Pigeons, for one thing. I can write about pigeons. Dan Cayer is the husband of Gina Cayer, who along with Lynn Legge was among the key players in the organizing of the MCHS Sixties Reunion that took place in Toronto in 2015. I mention Dan because Dan has devoted many years to the judging of pigeons shows in countries around the world. He’s in demand as a judge of pigeon shows.

Dan reported at out June 2022 picnic that he’s had calls to judge pigeon shows over the past two years and more of the COVID-19 pandemic, but he’s been staying put in Canada. That’s because it may be easy enough to travel to some other country to judge a pigeon show, but the question is: Are you going to be able to get back to Canada, in light of the pandemic, or do you get stuck in the country that you travelled to? 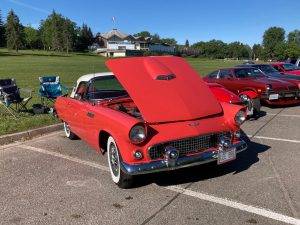 We also spoke about Google Maps. I mentioned that I recently (end of May 2022) travelled to Montreal for a conference. I used Google Maps to guide my way. I drove along the 401 from Stratford to somewhere around Cornwall – after which I travelled along the north shore of the St. Lawrence River and then along the Lachine Canal to my first destination, which was the Royal Victoria College university student residence by the McGill University campus. 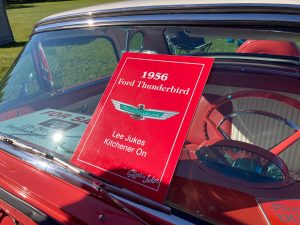 Without Google Maps, I would have been taking busy highways all the way to downtown Montreal – a hectic drive, and not much in the way of having a good time. By contrast, the Google Maps route was more leisurely – more of a fun driving experience. 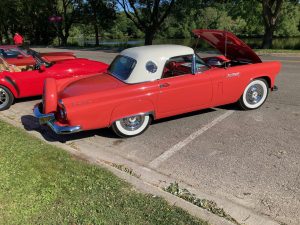 On the way back to Stratford from Montreal I took a side trip to Ottawa stopping overnight at a motel in Gananoque, Ontario. On the way to the motel, I spent a very short amount of time on the 401 but aside from that it was all along secondary roads guided by Google Maps. On the way back from Ottawa, instead of travelling along the 401 I stayed off the 401 entirely. I took a route that took me north of Toronto, again along quieter roads that are not as busy or hectic as the 401. 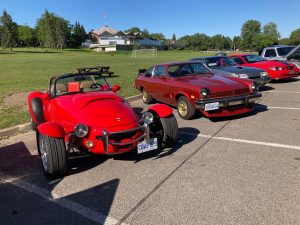 I spent a lot of money on gas. So, what else is new?

I have an email list for sending out messages related to planning for our MCHS picnics which take place in Toronto and Southwestern Ontario. Many people help out with the networking and spreading of the word about these get togethers. In particular, Lynn Legge and Gina Cayer keep many people informed about these events, in addition to whatever interest I can drum up via the email mailing list.

Incidentally, if you attended MCHS and wish to be on the email list, let me know. I’m at jpill@preservedstories.com 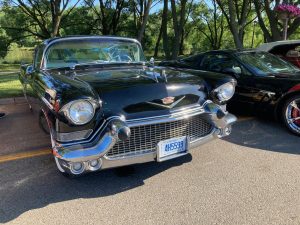 In addition to the car show featured at the current post, on June 10, 2022 I also attended another, smaller vintage car show in Stratford. In the latter case, the cars were older than the ones on display on June 19; they were cars that were manufactured about a century or more ago. I’m reminded, in this regard, of events in Stratford over a century ago. 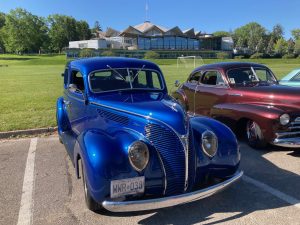 A move was in place, during that era, for the Canadian Pacific Railway to build a line along the south side of the Avon River. Such a railway line would have gone right through the area where the June 19, 2022 vintage car show took place over a century after debates were going on, regarding the building of a railway line. The outcome of the story is that a vote was held among Stratford ratepayers (ratepayers, as I understand, are property owners who pay property taxes). The vote was against the installation of the CPR railway line. The parks system I\n Stratford was saved from destruction. That’s a fact that warrants celebration, these many years later. 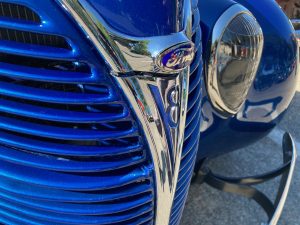 Finding the way to Woodstock

Lynn Legge has a friend who lives in London who was not able to make it to Lynn’s backyard this time around. Lynn has resolved that, for the Woodstock event, she herself will give her friend a ride.

A feature of the Woodstock site, where we’re planning to meet at summer’s end, is that there’s protection in the event of rain and there are washrooms close by.