One of life’s great pleasures is going for a walk in Stratford, while leaving the iPhone or camera at home

From time to time, when I go for a walk in Stratford, I leave my iPhone or camera at home, and just focus on observing what I see.

At other times, I usually take an iPhone with me and take many pictures. 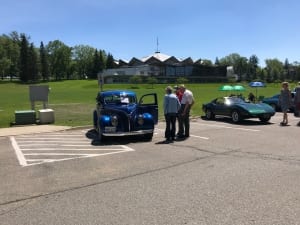 Stratford Classic Car Show, June 23, 2019. I don’t know if this was official name of the show. I wasn’t able to find the official name. I trust it’s close enough. Jaan Pill photo

Walking around without a recording device means that a person has a decidedly different experience.

That’s because a camera serves as extension of the mind/body – and when it is performing that role, the mind/body sees less than otherwise would be the case.

That said, most of the time I take the extension with me, which is why I have a selection of photos to choose from, for the current post. 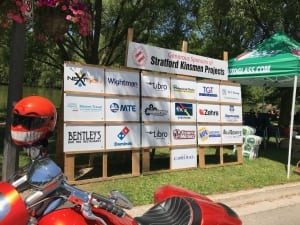 Today (June 23, 2019), I noted a tweet by Ron Sexmith which served to remind me that a Classic Car Show was happening this day.

Thanks to the tweet, I made it out to the event a half-hour or so before it ended.

The show was set up along the southern banks of the Avon River along a stretch of roadway starting at Front St. and Lakeside Drive, and extending eastward along the latter roadway. Lakeside Drive was closed off along the stretch going east from Front St.

Had I not seen the tweet, I would not have made it to the show. 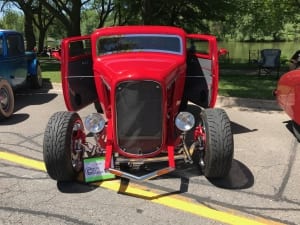 I overheard a conversation in which an observer at the show, in the sunshine along the Avon River within sight of the Festival Theatre, remarked (and I paraphrase):

“I used to have one like that – body was grey, with a white top.”

That’s a great story, a great word picture – so much information shared, in such a few words.

I also caught part of another conversation, which also stayed in mind. An observer said to a listener: “It’s an original original. He’s done nothing to it.” 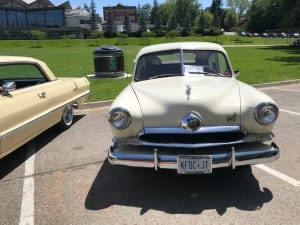 I must say I liked that quote. Keeping a car in its original condition is a major feat. Not everybody takes that route. Everybody goes their own way. I like the ‘original original’ way for sure.

Among the photos I have posted are views of a 1953 Kaiser Frazer on display at the Stratford Classic Car Show. I like the fact it dates from 1953, the year the Stratford Festival was launched. 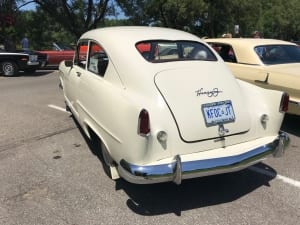 As I note at the landing page at this website, the launch of the Stratford Festival in 1953 was a most inspiring achievement.

Recently I’ve been reading two beautifully written, entertaining books by Tyrone Guthrie, who served a key role (as artistic director) in the staging of the first-ever Stratford Festival.

He’s a great storyteller and I’ve been reading his overview about his life in theatre with much interest. He was a most amazing person! 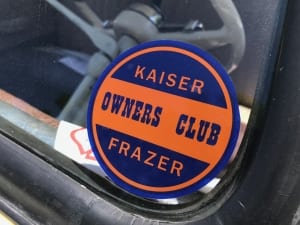 In Tyrone Guthrie’s recollection, the most influential factor ensuring the successful launch of the Stratford Festival in the early fifties was its timeliness.

Other key factors, noted by Guthrie among others, were the organizing committee; quality of the plays; construction of a thrust stage (as opposed to a standard proscenium stage); publicity by Mary Jolliffe; crucial financial resources that came through at just the right moments; and the vision of Tom Patterson. 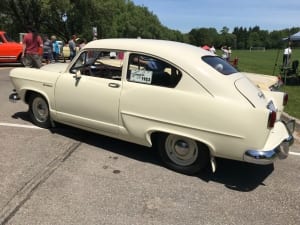 Guthrie viewed theatre as ritual, a characterization that the thrust stage enables. In such a ritual, audience members (seeing each other across the open stage, as they are seated on three sides of it) are at all times aware of each other’s presence.

That stands in contrast to theatre as illusion, a characterization that the proscenium stage (with audience members all looking in the same direction) enables.

To get back to the 1953 Kaiser Frazer, I am most impressed that the owner belongs to a club called the Kaiser Frazer Owners Club.

I’m a great fan of clubs, societies, and associations of all kinds, assuming they function to serve the public interest, which is where my own interests lie.

I support the public interest so long as interests of minorities and marginalized individuals are respected and promoted, given that in my view everybody matters.

As well, after the show was over, I thought about the fact that when the cars were leaving, it was like the small airplanes were leaving, at the conclusion of a recent fly-in charity breakfast that I attended at the Stratford airport recently.

The concept of maintaining the ‘original original’ also applies to heritage houses. It doesn’t only apply to cars.

At a previous post I spoke about how, on a February 2019 visit to Hoffmeyer’s Mill in Sebringville, we met owner Reg Ogilvie who showed us some fixtures that were being made for owners of a Century Cottage in Stratford. The owners were making a point of returning their heritage building to its original form, removing a number of additions that had been added to it, over the past century. 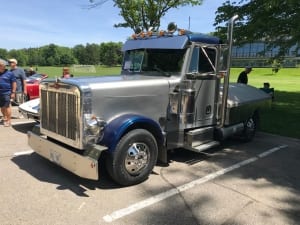 That is one way to go: Just bring the heritage house back to its original condition.

There’s another way to go as well.

In fact, there are many other ways to go.

You can take a heritage house and stick on an addition, and do it in such a way that it’s a great thing to have some extra space, as experienced from the inside, and at the same time the addition fits in well with the character, lines, and composition of the original building. 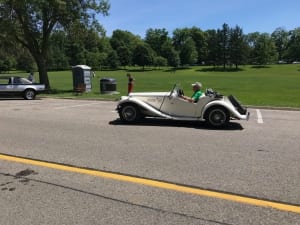 There’s an alternative way to go as well, of course.

You can take a beautiful heritage house and add an addition that from an architectural point of view makes no sense whatever, but from the inside of the house the extra space is well worth having.

These are things that I think about when I take a walk around Stratford, in the neighbourhoods (of which there are many) where lots of heritage houses – well over a century old – still stand. My own preference is for additions that fit in with the character of the house. There are many such additions across the neighbourhoods of Stratford, and I am pleased to see them. That’s what I like to focus upon. I like to focus on what works, as seen from my vantage point. What works for other observers is what works for them. 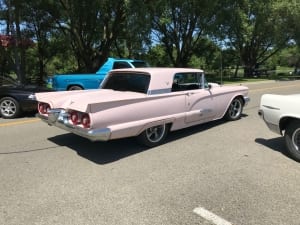 Let me proceed to my next thought. 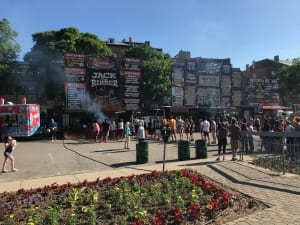 Yesterday (June 22, 2019) we attended the Blues and Ribfest taking place in Stratford.

Again, this event was by the Avon River but, this time, it was to the the west of Wellington St. South. I haven’t eaten meat for about a half-century so I observed the lineups for ribs, without joining the lineup. Instead, I helped in the process of finding a picnic table where those among us, who love to eat meat, would be able to enjoy their purchase of pulled-pork ribs (or whatever the meat happened to be). 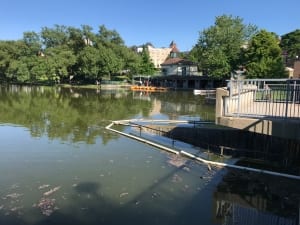 Before I assisted with the picnic table task, I spent some time at the Orr Dam.

This was the first time that I had observed the dam up close.

Recently as I’ve walked along the eastward expanse of the Avon River (which some observers like to call Lake Victoria, although I have the sense that such a term has somewhat limited usage), I observed a family of waterfowl swimming by.

I really liked that sight.

I like how birds along the Avon River all like to hang out together. They’re social animals. According to some research, when animals hang out together their brain waves start to work in synchrony. Same as what happens with humans. (You already knew that, I know.) 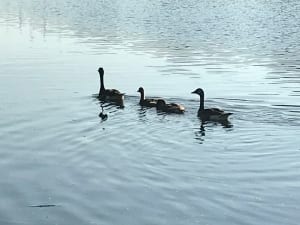 I’ve been following the Cooper Lot story for several years. Some years ago, I attended a weekend seminar, on the topic of heritage conservation districts, organized by the Heritage Resources Centre (a most impressive and valuable entity) at the University of Waterloo. The event took place in Stratford.

At that time I learned about the Cooper Lot, and got an update on discussions and deliberations that were underway, regarding what was going to happen with the site. 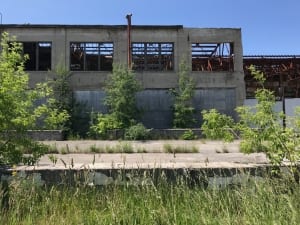 At that time, the site of the old railway repair facility had not yet been fenced off, as it is now. Thus some years ago, I had the opportunity to have a close look inside. It was a most impressive sight to see – that site is huge, and a lot of history is connected to it. 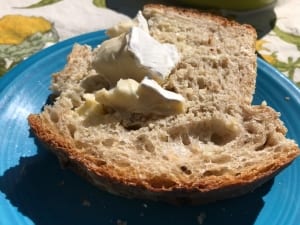 Another of life’s great pleasures is a slice of 12 Grain Bread from the Downie Street Bakehouse in Stratford. Jaan Pill photo

Not far south of the Cooper Lot, as you travel past the YMCA of Stratford-Perth along Downie Street, you will arrive at the Downie Street Bakehouse.

This is a most awesome bakery.

A slice of 12 Grain Bread, or a slice of any of a number of other breads or other baked goods on offer, is among life’s great pleasures. 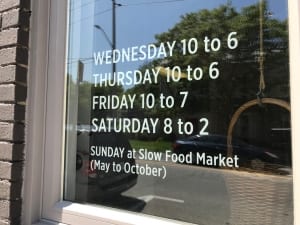 This text has many purposes

I have also written this text so that I will have an infrastructure, into which a few photos can be inserted.

The format that the website provides is my instructor. 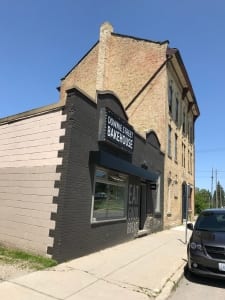 It tells me how to proceed, when I write a post.

It taught me a long time ago:

“If you want to post some pictures, you have to create enough text – write enough words – so that the pictures have an infrastructure, inside of which they can be positioned.”

June 2019 Newsletter of Lakeshore Grounds Interpretive Centre: Birds, Art, and... A public meeting took place with regard to Lakeview Lands on June 24, 2019 at...
Scroll to top