A public meeting took place with regard to Lakeview Lands on June 24, 2019 at City Hall, Council Chambers, City of Mississauga; I look forward to news updates

A public meeting took place with regard to Lakeview Lands on June 24, 2019 at City Hall, Council Chambers, City of Mississauga; I look forward to news updates

The Lakeview Ratepayers Association has shared images from 2014 and 2019 related to the Lakeview Lands project along the Mississauga waterfront.

A June 24, 2019 meeting at the Council Chambers of the City of Mississauga City Hall featured presentations by the developer (LCP) and city staff to Council with regard to the Lakeview Lands.

The topic was new proposed changes to the Plan.

The images at this post are from a tweet from Lakeview Ratepayers Association, showing the 2014 proposal as compared to the 2019 proposal. 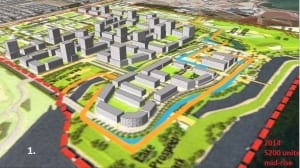 The website of the Lakeview Ratepayers Association has shared the following details regarding the meeting: 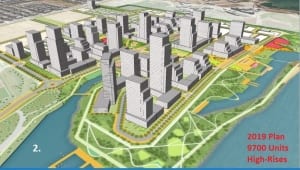 I’ve been following the Inspiration Lakeview story for many years starting when I heard about the highly innovative community organizing work that Jim Tovey was involved with starting as president of the Lakeview Ratepayers Association.

I attended the AGM of the Lakeview Ratepayers Association in October 2017 and was most impressed. It was among the last times that I recorded a meeting where Jim Tovey spoke at length in his role (at the time) as Ward 1 Councillor: For many years, before I moved from Long Branch to Stratford, I followed Jim Tovey’s career closely and have reported at length about his strongly collaborative leadership role, in a wide range of innovative Mississauga waterfront projects, including Inspiration Lakeview; the Lakeview Waterfront Connection project; several Port Credit land use projects; and the Small Arms Building project.

I am pleased to add that, as I have noted at previous posts, another Lakeview resident who played a key role alongside Jim Tovey, in getting the above-mentioned projects off the ground, was Lakeview resident John Danahy, of the University of Toronto faculty of architecture, landscape, and design.

I am impressed with what I observed, during the years I lived in south Etobicoke, regarding Mississauga’s approach, at that time, to urban planning.

In those years, a frequently recited meme was that distinctly unlike Toronto, Mississauga did not make it a practice to build tall towers along the Lake Ontario waterfront. I have not been attending meetings in Mississauga for some time; I do not know how that meme is doing these days.

In those previous years of regular observation, and extensive recording of events and meetings, I also noted a strong – and thoroughly inspiring – alignment between rhetoric and reality as it relates to citizen input, in relation to land use decision making.

I look forward to learning details about how redevelopment is proceeding in Port Credit and in Lakeview.

If anyone has links or comments they may wish to share, to help me keep up with news related to these projects, please contact me.

One of life’s great pleasures is going for a walk in Stratford, while... Memories of walking along Davisville Ave. in Toronto in 1975
Scroll to top