I was interested to read what’s available of the above-mentioned report.

An excerpt from the part of the report that is available online reads:

A key part of the community outreach strategy was to establish partnerships and identify cross-promotional opportunities with like-minded organizations to increase visibility.

Some of the strategies included:

Contacting municipal government officials across the GTA to reach out to communities through their networks (newsletters, event listings, social media)

Reaching out to already organized and “ready to walk” groups such as ROMWalks, senior’s health programs and Meet-up groups

The matter of  partnerships, in any community endeavour, warrants careful thought as I will note below. But first, some comments about what a Jane’s Walk is.

I do not know what a Jane’s Walk is, as I’ve noted previously:

One of the walks I co-led in May 2013 is featured at the Jane’s Walk Toronto site:

The text (which underlines the value of good planning, when organizing walks) reads:

The first Jane’s Walk in Long Branch, in 2012, attracted over 80 people. It took longer than we’d expected, and we were glad we’d brought along a portable sound system. The week before the walk, we learned details about a local park that we hadn’t known about before – especially about a road that used to extend along the shoreline of Lake Ontario, when the area was a thriving cottage community in the 1930s. The walkers were delighted to hear about this. “Wow, I never knew that!” was a typical response.

This year, our neighbourhood had two Jane’s Walks. We rehearsed and edited the routes for each event, to ensure they would not take more than 90 minutes. As before, we made a point of turning each walk into a conversation, not a top-down lecture. The walk leaders picked up as much new information as everybody else.

Again, we conducted advance research. We spoke with long-time residents who knew the area as children in the 1930s; some even provided us with photos and several hand-drawn maps, which we brought along to show the walkers. Though few of our interview subjects had the stamina to join us for a walk, they were delighted that they could share this valuable information. We also posted relevant images and details on my website about local history and events, PreservedStories.com.

The historic building shown in the photo is in New Toronto, a community just east of Long Branch. Now part of a skating facility at Colonel Samuel Smith Park, the building was formerly part of the Lakeshore Hospital Grounds, a psychiatric hospital which was closed down in 1979.

What happens at the periphery matters

Please note the above-noted excerpt says that the first Jane’s Walk in Long Branch took place in 2012. In fact there had been at least one Jane’s Walk some years earlier, as I’ve noted at my website. The 2012 walk was the first of the particular walks that were organized starting in that year, led by Jaan Pill and Mike James.

I note from the 2019 report, which speaks of the need to ensure there are walks outside of downtown Toronto, that South Etobicoke, where I organized many Jane’s Walks in years past, as I understand had a single walk in 2019, in the form of a bike tour.

I know the Long Branch event was well-organized as I was involved in discussions with David Juliusson during the planning of it:

It’s a great idea to get more involvement in Jane’s Walks, and in heritage preservation efforts as well, in areas outside the downtown core of Toronto. The southwest corner of Toronto on the Lake Ontario waterfront is such a peripheral area, which has a rich history like any other part of Toronto. I have highlighted the importance of considering the periphery at a previous post entitled:

The value of the outlying neighbourhoods of Toronto, with regard to heritage and related matters, is also noted at a 2019 Heritage Toronto report:

Changing the Narrative – State of Heritage Report 2019: This document from Heritage Toronto is well worth a close read 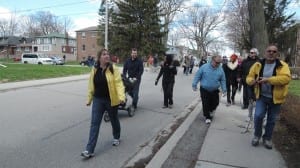 Our May 4, 2014 Jane’s Walk began at Marie Curtis Park and proceeded through Long Branch (above) on the way to the Ontario Hospital Grounds in New Toronto. Jaan Pill photo

For several years I was involved first with co-leading (with my friend Mike James) of Jane’s Walks in South Etobicoke and later with organizing of such walks in Etobicoke and Mississauga.

I enjoyed reading the reference, in the recent Jane’s Walk 2019 report, regarding partnerships. The reference brings to mind a previous post, in which I refer to what the concept of community entails.

Community: A Contemporary Analysis of Policies, Programs, and Practices (2011)

As I’ve noted previously, the Stratford Public Library is smaller than the Toronto Public Library. Both library systems are impressive. The library in Stratford has fewer books than some libraries in Toronto but the ones on the shelves, in my anecdotal experience, are really well chosen.

Among books I’ve learned about in Stratford, just by browsing shelves at the library, is a study entitled: Community: A Contemporary Analysis of Policies, Programs, and Priorities (2011).

I’m currently reading Community (2011) because it features a balanced, well-informed discussion (from the perspective of sociology and anthropology) of the intersection between neoliberalism and community.

The book features a multi-faceted, context-sensitive discussion about how community is defined. Sometimes, such definitions accord with evidence; at other times, they ignore the evidence on the ground.

Partnerships and community engagement: Does the rhetoric match the reality?

In Chapter 4 in Community (2011), which focuses on partnerships and state funding, Katherine Kelly and Tullio Caputo ask whether the neoliberal state can set the agenda for things that need to get done (needs as expressed by a variety of interests) in the community, however the community may be defined.

The study notes that power and politics set up certain challenges, when the neoliberal state seeks to go about its business.

The authors refer (p. 67) to case studies that “look at how the neoliberal state has tried to use its funding to control the local agenda in communities across the country by identifying with whom it will work and prioritizing the issues, programs, and services that it wants to fund.”

We can add that actually implementing the neoliberal agenda is a challenge:

“However, as we have seen in previous chapters,” the authors note (p. 67,) “the state’s power to control funding is no guarantee that its policies or programs will be either implemented as planned or supported by the community.”

Among other things, success involves inclusion of “individuals who are prepared to take action, not just plan for it” (p. 82) and it may involve ingenuity and creativity in addressing organizational challenges.

Success also involves building trust with regard, for example, to sharing of information among partners from different organizations.

Partnerships that work well are a source of inspiration for all concerned. The case studies in Community (2011) serve as tremendously valuable narratives, regarding challenges and opportunities of life in Canada in a neoliberal era. I am really pleased I came across this book.

Challenge of getting facts straight regarding local history

As I’ve noted at a previous post, it’s a challenge to get the facts straight when sharing information about local history, such as at meetings, online, in print, or on walks.

That is: Ensure that what you report has been verified and corroborated; don’t just repeat, without checking further, what someone else has said (whether online or in print). The story of a British colonel’s log cabin underlines what this means.

Getting the facts straight: Colonel Samuel Smith’s cabin was demolished in 1955 not 1952

An investigative report on the American back pain industry, Crooked (2017) underlines... There is is an alternative to ‘eternal economic growth’
Scroll to top