Do you remember restaurants (including Lou’s Campus Grill) along Lake Shore Blvd. West in South Etobicoke in the 1960s?

At a previous post I spoke about Arnold’s restaurant at the corner of Forty-Second Street and Lake Shore Blvd. West in Long Branch.

The site of the former restaurant, across from the Long Branch GO station, is now occupied by the Aquaview condos. 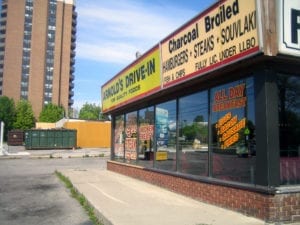 Mike James who grew up in New Toronto in the 1960s has shared some comments regarding other former restaurants along Lake Shore Blvd. West. In a recent conversation Mike looks back on restaurants from the 1960s.

Mike James: This got me thinking that there are only two restaurants operating under the same name as when I was a kid. They are the Lucky Dice at 5th St and lake shore and New Toronto Fish and Chips on 5th St north of lake shore. Could be others though. 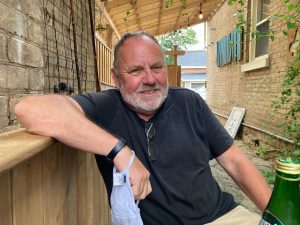 Mike James grew up in New Toronto. He moved later to Brampton. After retirement as principal at Munden Park Public School in Mississauga, he moved to Niagara-on-the-Lake. The photo is from a get together with Mike in Brampton on Sept. 14, 2021. Jaan Pill photo

Jaan Pill: That’s of interest. I came across a story years ago that a fish and chips restaurant around 39th street and Lake Shore is run by people whose parents owned Arnold’s restaurant. But I never got around to verifying that.

Mike: Around 1960, there was a fish and chips shop called Mom’s between 40th and 41st St where the redevelopment occurred. Must have been good, as dad drove there from New Toronto every Friday. There’s an opportunity for a book “restaurants of the lakeshore.” Another personal favourite was the Campus across from New Toronto SS on Kipling. I have a couple of photos if you’re interested. 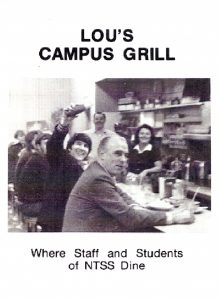 Jaan: Yes I would be interested in photos. Restaurants of the lakeshore would be a good book. In Stratford someone wrote a book about the history of local restaurants. I imagine many books about Toronto restaurants in other neighbourhoods have been written.

Mike: Here are two screenshots from my high school yearbook in 71-72. Lou and Dida ran the Campus grill (see photo) and were greatly loved by all the students and staff. We always went there when we skipped class!

That photo [of interior of restaurant] was taken about 50 years ago(!) during the 71-72 school year. The four identifiable people in the photo are, l to r: Mr. D.A Smyth (holding ketchup bottle) , Lou (Campus owner), Mr. I Edwards, and Dida (pronounced Deed-a, Lou’s wife). Both Smyth and Edwards were teachers but I knew neither one. The campus was a very democratic mix of students and teachers, and was full from morning until closing (3 pm?).  Also, I know Lou and Dida were of Greek heritage, but never heard their last name, they were just “Lou and Dida”.

Jaan: I’m hoping others will have photos. At a recent post I included a photo of Grand Avenue Public School, which a site visitor had sent to me. It’s always good when there are photos to share. Similarly people have in the past sent in some interesting photos from the Long Branch Army Camp which existed in postwar years in Lakeview 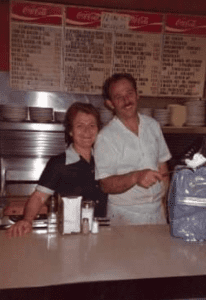 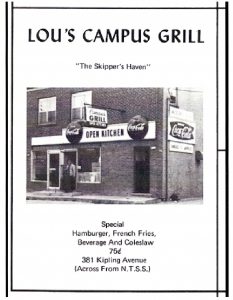 Things I’ve learned along the way

During the past decade I’ve learned many things in the course of volunteer work, blogging, and reading. At a previous post, I’ve added a note about what I’ve learned. I refer to it at the current post in order to bring attention to it.

Grand Avenue Public School. Source: Krystyna Lagowski, who forwarded a scan of this photo on Nov. 26, 2021 as noted at a previous post. 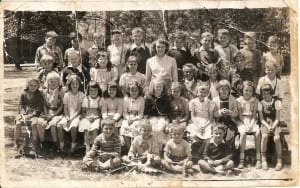 From a previous post: Class of 1949 at Long Branch Army Camp also known as the Rifle Range. The teacher was Miss Hoffman. Some of the students in the picture include Bobby Jung, Teddy Long, and Bill Hepworth. Photo source: Diane Chapman

Language usage – including language socialization and the use of language that is an outcome of a person’s formative experiences – is in turn at play when we consider the theory and practice of power dynamics.

I’ve spent time thinking, as well, about how these topics have played out in local history and the larger-scale version of it.

With regard to history, the climate crisis is a particular expression of – a strong and fateful demonstration of – the history of land use decision making at a global level.

Key concepts underlying such a history include the role that the European Enlightenment (however that is conceptualized) and the application of instrumental reason has been playing, and, indeed, continues to play.

Land use, space use, language usage, and power dynamics

Things I’ve learned along the way serve as a conceptual infrastructure, in a sense a rough working model of how things appear to work in the world.

As with anybody else, it’s my anecdotal experiences, and my formative experiences, that serve to organize my perceptions and my actions.

The inter-related concepts of land use, space use, language usage, and power dynamics – concepts which represent some of the most valuable things I’ve learned in decades of volunteer work – help me to organize my current reading, writing, and research.

Whether a given conceptual framework is or is not robust depends on a variety of factors. One such factor may be evidence; another factor may be the framing of evidence. But it does not stop there: What qualifies as evidence (which varies according to time and place in history) is also a variable. On the whole, we can say that it’s our capacity to create narrative, and the capacity to be strongly moved by it – lost in it, carried away by it – that tends to drive the bus.

In a subsequent post, I will elaborate on these concepts.

Some people still remember Arnold’s restaurant at Forty-Second Street... A Dec. 22, 2021 CBC article is entitled: “Hidden behind buildings, the...
Scroll to top