Robert Lansdale has shared a historic photo, from April 24, 1953, of the Colonel Samuel Smith homestead site in Long Branch, Ontario

Robert Lansdale has shared a 1929 photo from Long Branch, Ontario

Robert Lansdale has shared this photo from April 24, 1953. 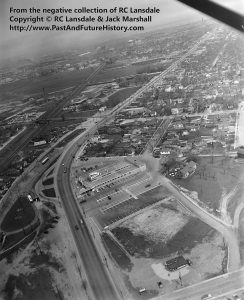 Lake Shore Blvd just east of the Etobicoke Creek on April 24, 1953. Colonel Samuel Smith’s homestead (demolished 1955) is at middle of photo slightly to the right; to the left of it is Dominion store. Copyright © RC Lansdale and Jack Marshall. 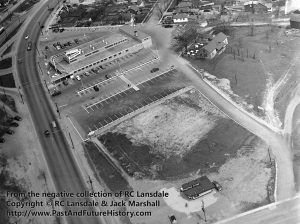 This photo shows Lake Shore Blvd just east of the Etobicoke Creek on April 24, 1953. In particular, it shows Col. Samuel Smith’s homestead and Dominion, the former demolished 2 years later in 1955. 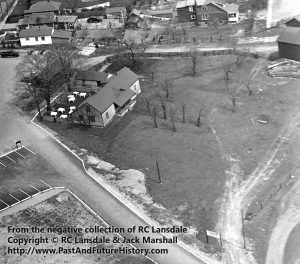 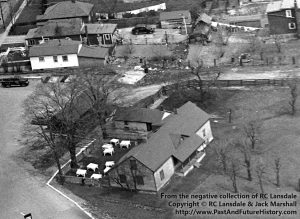 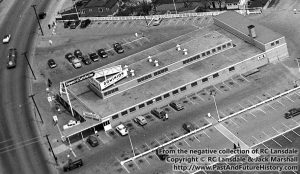 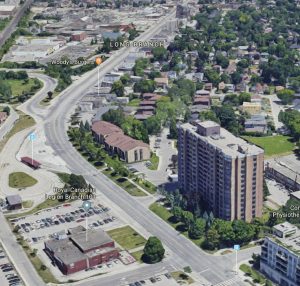 Click here for previous posts about the former Parkview School > 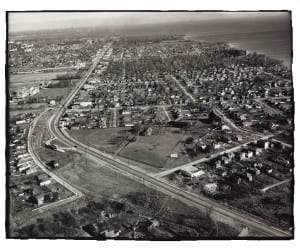 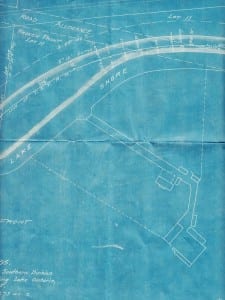 The two photos – the November 1949 Ontario Archives aerial view and 1905 survey map – are from a post entitled:

At the post I refer to a draft of a memoir that Bernice Law was working on before she passed away.

One of my ongoing projects involves editing a memoir that Bernice Law wrote during a project that she initiated with a letter to the Toronto Star over twenty years ago. An excerpt from the above-noted post reads:

Long Branch subdivisions map.The coloured line shows the route of a Jane’s Walk in Long Branch in May 2013. 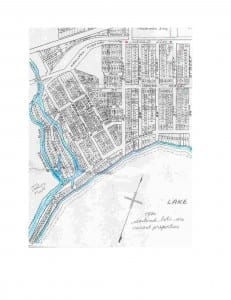 It is hard now to visualize all the farm buildings surrounding the yard but it is my impression that there were at least two residential buildings on the south west and, on the east, buildings which housed the animals, carriages and equipment.

An excerpt (with accompanying photos taken with a vintage Nikon 35mm camera – which I had originally acquired when it was an all-new, state of the art product [1]) reads: I will not try to recount details, aside from the air being thick with smoke, that I remember from interviews or conversations I’ve recorded regarding the Eastwood Hotel. Instead, I’ll wait until I’ve transcribed the recordings before I post the details. We bought a house in 1997 on Villa Road, a 10-minute walk from the hotel. Around that time, we got word that living that close to the Eastwood Hotel was possibly not the best idea. The source of the helpful commentary was an institution of secondary education, located at Kipling Ave. and Birmingham. [That is, teachers at a local high school would talk about the reputation attached to the hotel, and some of those tales came our way when we were in the process of buying a house.] Driving under the influence

As I was walking, I noticed an older-model car parked in front of the Eastwood Hotel. I also noticed a bar patron stepping forward from the hotel. Unsteady on his feet, being from what I could gather under the influence, the person in question opened the door of the parked car that I had just noticed and drove off. I noted the license plate and called 911 on our landline phone when I got home.

Norse mythology refers to Valhalla, where warriors who have died in battle relive their days of glory When I think of Valhalla, I also think about the Valhalla Inn, which used to be in place until 2009 where a condo now stands, along the 427 as you’re travelling north toward Burnamthorpe.

He and I were both members of a board of directors of a national nonprofit organization that we both had been involved in founding at a conference in Banff, Alberta, in 1991. Some years later, we had an annual meeting for the organization, at our family’s home on Villa Road. On that occasion, Michael rented a room at the Valhalla Inn. I liked the expression – “my station in life.” From time to time I’ve been reading extensively about the history of the British empire, and Michaels’ remark reminded me of how, in the mythology related to the British empire, each person was assigned to a particular station in life, and everybody (from highest to lowest) was expected to affirm contentment with being an integral player in the vast expanses, and vast populations, of the empire. [2]

Robert Lansdale has shared a 1929 photo from Long Branch, Ontario  From time to time, I read about rural history; recently, I’ve been reading...
Scroll to top