I had the good fortune to attend a cultural heritage workshop in Gravenhurst on April 26, 2012.

At the workshop, Bert Duclos, heritage outreach consultant with the Ontario Ministry of Tourism, Culture and Sport, covered four topics:

(1) What is cultural heritage value?

(3) Inventory, evaluation, and designation: From survey to protection

(4) Identifying and responding to community challenges 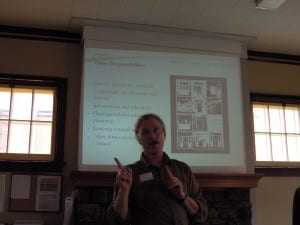 The workshop was four hours long. This is a good length for such an event. Much ground was covered, quickly and well.

The workshop did not focus upon heritage conservation districts, which is my immediate focus of interest.

However, I found it highly valuable to get a sense of the legislative framework that applies to all conservation efforts in Ontario.

(1) The first thing I learned was that it’s imperative for members of a municipal heritage committee, which advises a municipal council, to demonstrate objectivity when they provide information related to heritage topics. They are advised not to engage in advocacy.

By way of example, Bert Duclos explained, if a council makes a decision that the heritage committee members don’t like, it’s not useful for the members of the committee to make public comments castigating the council. 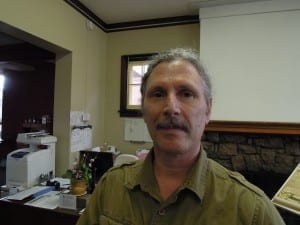 (2) The second key thing concerned the importance of putting together one’s package of information when communicating with a municipal council. Bert Duclos, who has twenty-five years of experience in marketing, strongly emphasized this aspect of a heritage committee’s work.

(3) The third key point was that a love of heritage is what prompts a person to become involved with heritage committees. It serves as a key strength for any person working on behalf of a community’s heritage resources. Learning about archival research and the like need not be seen as a daunting task. It requires time and effort to get up to speed in these areas, but these things can be readily learned.

Networking is a key benefit of such workshops

(4) The fourth key benefit of the day for me was the networking that occurred after the meeting. I learned of several new contacts who will be of value in our heritage conservation work in Long Branch.

I also came across a great story about how, in the days when fishing in Lake Ontario was a major focus for communities such as Long Branch, Port Credit, and Oakville, an arrangement was in place to ensure crews on fishing boats got back home quickly for Christmas each year. Boats would be moored at an island near Kingston, and everyone would hop on a train to get back in time for the holidays.

As well, I gave Bert Duclos a bookmark for Jane Fairburn’s upcoming book, Along the Shore. It’s a great bookmark, and serves as a great way to promote the book.

Subsequently, Jane Fairburn shared with me the following comment about fisheries on Lake Ontario:

“With the Lake as my focus, I have addressed the commercial fishing industry that took place in each of the waterfront districts I have covered in the book, including the Lakeshore.” She reports that the oral history recorded by C.H.J. Snider has been particularly helpful in this area.

We owe thanks to Tom Millar of Toronto — who is also active in conservation efforts in the Muskoka Lakes Township — for letting us know about this workshop. I met Tom at a heritage conservation district workshop that I attended in Stratford in March 2012.

The blurring of boundaries between private and public Barn in background of 1920s Long Branch photo appears to be located on Samuel...
Scroll to top