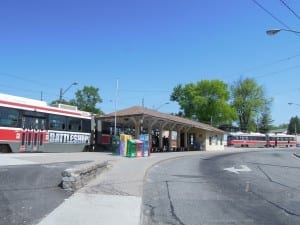 The shelter at the Long Branch TTC Loop was built in 1928. In the same year, Mickey Mouse made his on-screen debut and (it can be said) proceeded to colonize the minds of movie-goers around the world. Similarly, Paul Rutherford (2000) argues that civic advocacy has served to colonize the public sphere with a discourse which represents the world of affairs as a gathering of problems, products, and solutions, always to suit the purposes of selling.

In a previous post, I’ve referred to the argument that the introduction of a moral logic has turned out to be an effective way to sell public and private goods.

This is a dimension of civic advocacy that I did not pay much attention to, when I first read the concluding chapter of Endless propaganda (Rutherford, 2000).

The topic is of sufficient interest that I’ve devoted an additional blog post to it.

Paul Rutherford notes that Jürgen Habermas has expressed agreement with other philosophers that, in what he has characterized as an ideal democracy,  a moral point of view should ground reason and argument so that debate gave rise to “fair and universal results.”

Rutherford describes how the moral argument has worked out in practice in the public sphere, as it existed in what he describes as affluent democracies, between 1970 and 2000, the time span of his study.

“The calculus of right and wrong,” he notes, “was eventually built into the structure of the propaganda” in a process that entailed honouring and dishonouring.

Civic ads, in this formulation, can be viewed as fables of vice and virtue, or as sermons.

“The typical ad concludes by ascribing virtue to its sponsor and prescribing the appropriate conduct, which normally translates into buying, figuratively rather than literally, a particular politician, object, sacrifice, or behaviour — in other words, an actual or a virtual product. Or sometimes the ad sells not buying that product. ”

Given that the addition of a moral dimension to advertising strengthens the message, civic advocates have sought to construct a moral hegemony in the public sphere, “to ensure that their conceptions of good and evil, right and wrong become the official norms, if not common sense.”

Our society demonstrates elements of ‘refeudalization,’ according to the author. Modern publicity and feudal publicity share an affinity. Both have sought to represent authority, and to enhance the reputation of that authority, before a largely passive public.

Staged or manipulated publicity creates a sham public sphere in which people might acclaim some already-decided public policy.

It follows, according to Rutherford, that in a marketized public sphere, democracy involves rational choice instead of rational debate. Under these conditions, many citizens will choose not to participate.

Civic advocacy has resulted in both militancy and indifference, with both responses grounded in aesthetic responses to the messages, according to the author.

Public participation in affluent societies is usually limited, in other words, according to Rutherford, to aesthetic responses by citizens as consumers or spectators.

Civic advertising, the study notes, has served to increase the commitment of the nearly and already committed. Concomitant with this phenomenon has been the rise of the non-profit sector during the last three decades of the twentieth century, using the mails, the telephone, and the media to organize its membership.

“These partisans,” notes Rutherford, “were and are moved to action, not to discovery, and rarely to dialogue.”

The media, meanwhile, delivers news through a monologue  that the author describes as contaminated by the ubiquity of publicity.

“Popular participation is restricted, usually being limited to the response people as consumers and spectators have to the commodities and sights on offer.”

The reference by Jürgen Habermas and others to an ideal democracy does not inspire me. The history of the twentieth century demonstrates that all-encompassing attempts to set up ‘ideal’ societies can readily give rise to unfortunate consequences.

The shelter at the Long Branch TTC Loop was built in 1928, the year Mickey Mouse... Mental imagery, as Frank Thomas and Ollie Johnston explain in their 1978 talk...
Scroll to top