The following text (see below) concerning Vancouver’s Kitsilano Secondary School, which appears to have been written before the fall of 2010, is from the Canadian Heritage Foundation website.

Here’s an update on plans for the school. A heritage conservation plan has been published. This article indicates that Heritage Vancouver is pleased with the plan developed since 2010. This article questions the extent to which the heritage features will be preserved.

The last-mentioned link in the previous paragraph notes that:

“The Kitsilano Secondary School site is important for its cultural, educational and aesthetic significance; in particular for its use of the Modernist design idiom in the 1958 additions and for its choice of that idiom to express the functional expansion of public education in the city’s secondary schools.”

The text in the last-mentioned link also notes that:

“The aesthetic significance of the site lies in its use of the International Modern-style, which was typical for Vancouver Secondary schools built at this time, and which reflects the Modernist ideals of uncomplicated concrete frame construction, a minimum of embellishment, and an external expression of internal functions, all reflecting the intention to provide clean and efficient spaces that embodied ideals of social mobility and equality.”

The references modernist design trends bring to mind Ken Greenberg’s discussion of the influence of the “modern movement” in architecture on early urban planning in Chicago and elsewhere.

From my limited perspective on such matters, I’d say that the preservation of “the principal 1927 building street façades [of Kitsilano Secondary School], while not compromising the original form, scale, and massing,” as outlined in the heritage conservation plan, is a significant achievement.

You can enlarge the photos below by clicking on them. 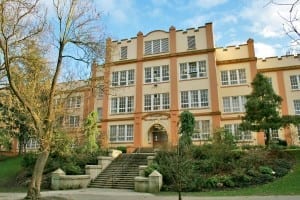 Vancouver’s historic schools are neighbourhood landmarks which represent a variety of architectural styles and development periods. Located at the heart of each neighbourhood, they are, in many cases, the largest, most significant and meaningful heritage landmarks in these communities. 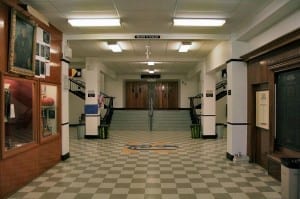 Opened in 1926, Kitsilano Senior Secondary was built on an impressive scale that demonstrated the high value placed on public education. Designed by Vancouver School Board (VSB) staff architect Frank A. A. Burns in the Collegiate Gothic style, the school was naturally lit with large operable windows and features grand stairways and entries, high ceilings and broad hallways. A Modernist-style addition was erected in 1958.

Since 2005, the British Columbia Ministry of Education’s Seismic Mitigation Program (SMP) has provided a pool of money to ensure that school environments are made safer from earthquake damage.

The Ministry applies a funding formula that limits the cost of a seismic retrofit to 70% of the cost of constructing a new school, giving unfair advantage to new schools which usually provide significantly less square footage per student compared with historic schools.

The intent of this funding is being distorted by the VSB which is taking this opportunity to build new, rather than upgrade existing schools. The board has stated that heritage is not high on its list of priorities, as it has already demonstrated by sending Sir Charles Dickens School to the landfill in 2008 using SMP funds.

There has been minimal neighbourhood consultation to date on renewal plans for Kitsilano Senior Secondary. In February 2010, the VSB released its preferred concept design for the school at a public open house. This concept would retain only the front and side façades and send the rest of the interior and the 1950s addition to the landfill.

Vancouver heritage groups point out that the VSB has yet to develop a comprehensive plan for seismic upgrade of their portfolio of schools. There appears to be a different set of rules for each individual school, rather than a coordinated approach.

The VSB also refuses to recognize alternative methods of achieving seismic compliance. In other parts of BC, schools have been sequentially emptied and seismically upgraded, resulting in minimal disruption to students and no demolition.

Vancouver’s historic schools are in peril. On July 5th [I believe the year was 2010] the Vancouver School Board unanimously approved a plan for demolition of Kitsilano Senior Secondary in its entirety, save for the 10th Avenue façade and selected windows, doors and hand railings. The provincial government and the City of Vancouver must approve this option. Heritage Vancouver and others have come out strongly against it.

If the province grants approval in the fall of 2010, construction could begin by mid-2012, with a completion date by the end of 2016.

This site was nominated by Heritage Vancouver.

Vancouver and the seismic angle

I’m reminded of this Jan. 1, 2013 Globe and Mail article about disaster preparedness in Vancouver.