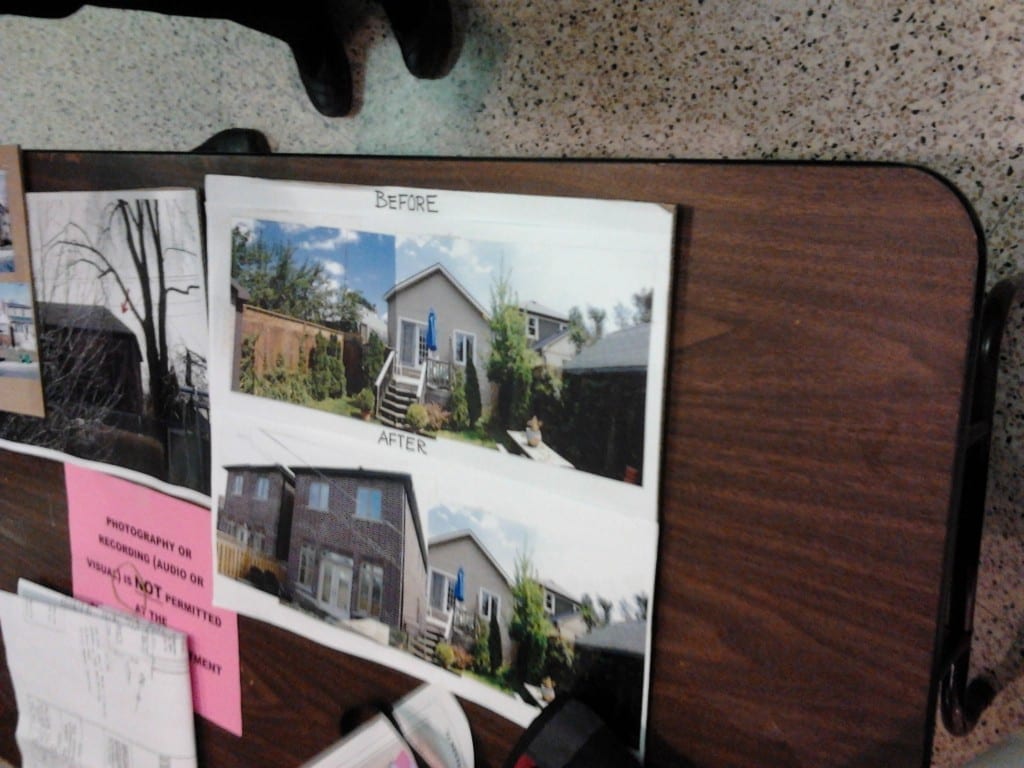 New version of Before and After from Adrian deRooy, 28 Ninth Street (next door to 32 Ninth Street). Jaan Pill photo

The developer’s proposal has been accepted by the Committee of Adjustment.

Joanne Macrae, one of the neighbours, has commented:

“Thanks to Adrian, Joanne, Susy, and Andre who spoke to the Committee, and Sheila, Garry, and Jaan, who were there to provide support. We gave it our best shot but the Committee approved the builder’s variance request. Thanks to all who wrote letters.

“We were sent out into the hall to have a long conversation with the builder that was friendly, and we agreed to disagree. The issue has been decided and we have no further plans to appeal it. I guess it’s not ideal what he’s building, but let’s file it under: ‘It could have been worse.’

“We did our best, thanks to all, happy Easter. And see you around the neighbourhood.”

[Conclusion of comments from Joanne Macrae]

Meeting with developer outside Committee room

At that time the developer who owns the 32 Ninth Street property was speaking outside the Committee room with about a dozen neighbours who’ve expressed opposition to the variance proposal for the property. A neighbour spoke of another dozen neighbours opposing the variance who were unable to attend because of other commitments. The discussion was cordial and respectful.

It’s my understanding, according to one neighbour, that the Committee requested that the residents and the developer go outside the room and talk.

My very rough sense of the discussion, which I attended for just a short time, was that the neighbours were saying that the points that neighbours had raised regarding the development were not being respected.

One of the points under discussion was the fact that the sun tracks across the neighbouring property at 28 Ninth Avenue, where skylights have been installed in an extension at the back of the house. The developer’s response, with regard to this point, was: “I’m below what I’m required [in relation to allowable height.]”

The response from a neighbour in this regard was – and I paraphrase: “Your staying within certain limits but you’re not respecting the points made by the neighbours.”

The developer also said, from what I could gather from the conversation, that he as a developer was being accommodating, and that another developer would not be accommodating. The response to this point, from one of the neighbours, was that any developer who would be seeking to develop the property would face the community’s concerns, with regard to the fact that the residents seeks development to be in alignment with the character of the community.

The developer noted that his cellphone number is available to residents and he can be called at any time.

As you will note from the photo above, Adrian deRooy has revised his Before and After photos showing more precisely what the back of the property will look like.