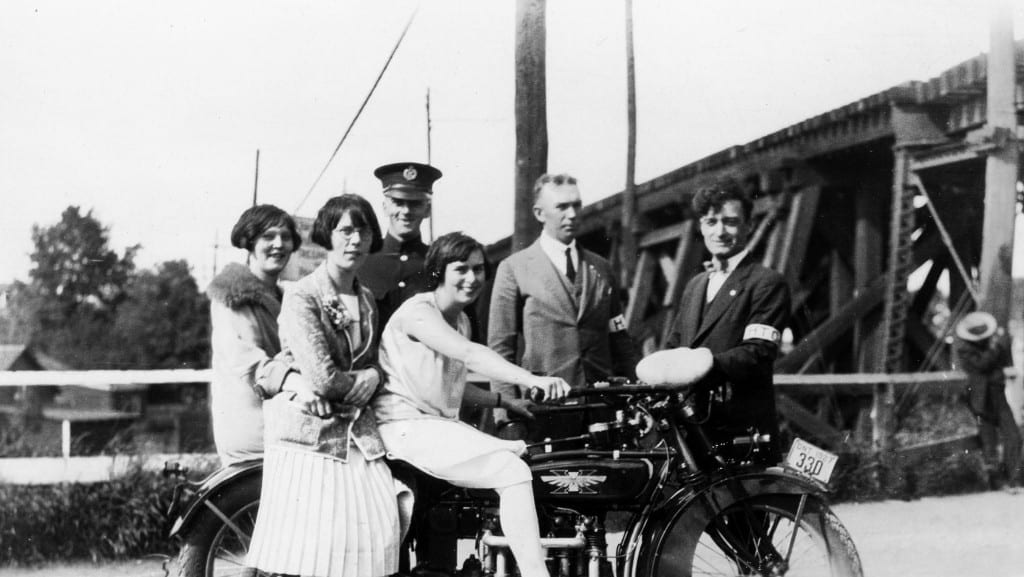 In a previous blog post, I referred to information we’ve acquired from Jim Carr and C.M. O’Marra regarding the motorcycle in the photo (above) taken at about 1927 at Etobicoke Creek. It’s one of the photos we are using to publicize the May 4 and 5, 2013 Jane’s Walks in Long Branch.

The illustration below is based on a photo (p. 30) from Motorcycle: The definitive visual history (2012). The motorcycle in the circa 1927 photo from Long Branch appears to be one of the early version of the the Henderson line of motorcycles. A later model, the Henderson KJ Streamline 1929, featured on p. 54 of the above-noted resource, has thicker wheels, larger fenders, and a larger gas tank. 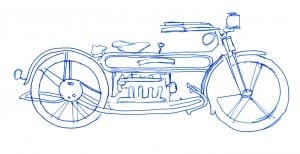 Henderson 7hp Four 1912. The image is an illustration by Jaan Pill based on a photo on p. 30 of Motorcycle: The definitive visual history (2012).

An overview of what is characterized as “America’s Golden Age” in Motorcycle: The definitive visual history (2012) notes (p. 30) that in the early twentieth century, most American motorcycle makers “chose to forge ahead with their own various solutions,” rather than bringing in technology from Europe.

“Roads between cities were entirely unpaved, so effective suspension was a vital development, as was rugged construction, ease of access for tire repairs, and forms of gearing to cope with hilly terrain.”

Henderson was eventually purchased by Schwinn

According to American cars, trucks and motorcycles of world war one (2010, p. 158), Tom and William Henderson began building motorcycles in Detroit in December 1911. The first Henderson four-cylinder model, which required hand cranking to start, had a long 65-inch wheelbase (distance between fronts and rear axles).

The above-mentioned book notes that the price for the 310-lb 1913 Henderson, capable of 55 mph, was $325 USD. The 1915 Henderson was capable of 70 mph. The article (p. 159) notes that “Customers and dealers enjoyed the power and smoothness of the four-cylinder motor but wished for a shorter wheelbase, which was offered in the model E that was developed in 1914 for 1915 in addition to the Model D. The Model E had a 58-inch wheelbase, which was still a half-foot longer than other comparable motorcycles but shortened by 7 inches from the Model D, and prices remained the same.”

With the difficulties of material and labor shortages with the American entry into the First World War, the Henderson company experienced financial pressures leading to the sale of its assets to Ignaz Schwinn in 1917. Schwinn had plans to compete with the Indian and Harley-Davidson brands. Tom and William Henderson stayed on with Schwinn until 1919, to get set up in Chicago at the Henderson’s Excelsior factory, which Schwinn had also bought. After that the brothers went on to other projects separately.

The book notes (p. 160) that improvements in Henderson motorcycles continued under Schwinn. However, the years 1929 and 1930 were financial disasters for the company. By 1931 motorcycle manufacture under the Excelsior and Henderson names were discontinued. Thereafter Schwinn focused on building bicycles. It now also manufactures fitness machines.

What else can we say about the approximate date of the photo with the Henderson motorcycle? The photo was taken about 1927. We can add that the invention of synchronous sound for movies also occurred in 1927, as Michael Ondaatje notes in his introduction to The Conversations: Walter Murch and the Art of Editing Film (2002). In the next year, 1928, Mickey Mouse made his screen debut. In the latter year, as well, the shelter at the Long Branch TTC streetcar loop was constructed, as the link in the previous sentence indicates.