I often drive by 198 New Toronto St. in south Etobicoke where Lantic Sugar is located.

The first link in the sentence above gives you a Google Street view of the location. The second link gives you an overview describing how sugar is refined. 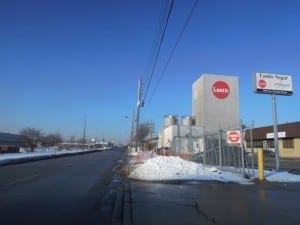 Whenever I drive by the Lantic Sugar plant, I think of the fact that it’s such an industrial-looking building. It looks like some kind of refinery. Then I think, “Well, what do you think sugar is? It’s a refined product. It’s the outcome of a refining process.”

The steps in the refining process, as the second link in the opening paragraph (above) notes, begins with the arrival of raw sugar. This is followed by several steps beginning with the removal of a molasses film on the surface of the raw sugar crystals. As a next step a high percentage of “impurities contained in the raw sugar crystals” are removed. The steps go on. The final step entails conditioning in which the moisture in the sugar crystals “is allowed to escape ensuring that the sugar will not harden or agglomerate at a later date.”

I mention the details as a preamble to a March 5, 2014 Globe and Mail article entitled: “WHO says limiting sugar to 5% of daily calories ‘ideal.'”

This blog post does not deal solely with refined sugar. 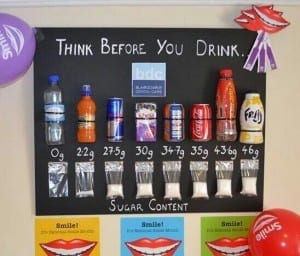 The sugars the article refers to include “sugar that manufacturers, cooks and consumers add to food, as well as honey, syrup, fruit juices and fruit concentrates.” It also specifies which sugars are not included (see excerpt immediately below).

What does five percent of daily calories amount to?

I made a point of buying the print version of Globe and Mail so that I could read the article in print form. I knew that version would have the information that I wanted, in a format that was readily accessible.

The printed version includes illustrations regarding what percentage of a person’s daily recommended sugar allowance (25 grams) – as recommended by the World Health Organization, in a set of draft guidelines – are accounted for by each of a series of everyday food items.

Below is a list of ten food items, with data regarding (a) total grams of sugar and (b) how the specified quantity compares to the daily sugar allowance recommended by WHO:

1. 1-can of sugar-sweetened pop contains 40 grams of sugar (60 percent more than the recommended limit).

2. One blueberry muffin contains 15.4 grams of  sugar (62 percent of the recommended sugar allowance).

4. A Mars bar gives you 32 grams of sugar (28 percent more than the recommended limit).

5. A 20-ounce Orange Gatorade provides 34 grams of sugar (36 percent more than the draft WHO guideline).

With regard to such drinks, a Jan. 31, 2014 CBC article notes: “Sports drinks unnecessary, counterproductive for most people.”

7. One tablespoon of ketchup provides 4 grams of sugar (16 percent of the recommended daily limit).

8. A McDonald’s Big Mac provides 9 grams of sugar (36 percent of the daily limit).

A March 5, 2014 CBC article, entitled “Lower sugar intake to less than 5% of daily calories, WHO says,” also provides information about how much sugar is provided by a range of foods or food products.

Additional reports related to the WHO recommendations 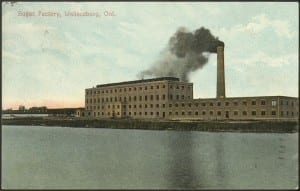 A Feb. 10, 2014 Globe and Mail article is entitled: “Take steps to reduce sugar in your diet to boost heart health.”

A Feb. 3, 2014 Globe and Mail article is entitled: “Excess sugar can triple risk of dying of heart disease: report.”

An April 30, 2014 Globe and Mail video is entitled: “Documentary reveals the dangers of sugar in our diets.”

A Dec. 3, 2014 Los Angeles Times article is entitled: “To prevent or reverse obesity and its ills, timing may be everything.”

A Feb. 7, 2015 CBC article is entitled: “Why toddler foods have so much sugar and salt: ‘The child’s biology really makes them vulnerable’ to food industry.”

An August 1, 2015 New York Times article is entitled: “My Dinner With Longevity Expert Dan Buettner (No Kale Required).” The article notes: Not a lot of dairy products.

A Dec. 16, 2016 CBC article is entitled: “Sugar’s on the food label, but you’ll have to guess how much has been ‘added’: Lobbying by food industry means Canada food labels won’t list ‘added sugar'”.

Small variations exist in how sugars are defined in media reports:

The March 5, 2014 article, based on the WHO draft guidelines, speaks of sugars in the following terms:

The March 5, 2014 CBC article (see above) about the WHO guidelines notes:

As a person who is keen about evidence-based practice, in any endeavour, I am very much impressed with these research reports. The evidence points to a very simple way – along with getting exercise, not spending countless hours sitting, and getting enough sleep – to enhance your health.

Updates: This post is concerned with the general topic of the relationship between the food we eat and our health. On that theme, a March 8, 2014 CBC article is entitled: “Pesticide traces in some tea exceed allowable limits.”

Also of interest, with regard to general health topics, is a March/April 2014 Mother Jones article entitled: “The scary new evidence on BPA-free plastics.”

A March 9, 2014 Globe and Mail article is entitled: “Some not-so-sweet facts about sugar in our food.”

An April 1, 2014 Guardian article is entitled: “Fruit and vegetable intake: five a day may not be enough, scientists say.”

The article, and similar reports in other media, is based on research published in the Journal of Epidemiology and Community Health.

An April 1, 2014 Daily Mail report regarding the above-mentioned research notes:

A July 8, 2014 Globe and Mail article is entitled: “Is gaining weight inevitable as we age?”

The July 8, 2014 Globe article (see link above) refers to  the microbiome, which is also the subject of reports on Twitter and The Current (CBC).

The article notes: “Indeed, only 10 per cent of the genetic material inside our bodies belongs to us and the balance belongs to the bugs in our guts. The microbiome is comprised of bacteria that co-habitate our bodies, many of which are critical to our survival.”

A July 30, 2014 CBC article is entitled: “Drinking too much soda could affect adolescent memory, ability to learn.”

A Sept. 23, 2014 Medical Press article is entitled: “Fruit and vegetable consumption could be as good for your mental as your physical health.”

A March 4, 2015 CBC article is entitled: “‘Leanwashing’ marketing tactic used to drive junk-food sales: Advertisers emphasize exercise rather than cutting back on their high-calorie products.”

A March 4, 2015 CBC article is entitled: “Sugar intake should be reduced to 5-10% of calories, WHO says: Guidelines aim to reduce risk of obesity and tooth decay for all ages.”

The latter article notes that Brazil’s proposed new guide urges people to be critical of food-industry advertising, and introduces healthy eating as a lifestyle choice. The article concludes with the following ten key points from the proposed document:

The authors of Brazil’s proposed dietary guidelines boiled down the 87-page document into 10 basic steps:

A Sept. 16, 2016 CBC article is entitled: “It’s time to eliminate treats in schools: health experts: Downplay food, give children a chance to be more active with extra recess time, games.”

An Oct. 10, 2016 Toronto Star article is entitled: “Doctors’ Notes: Watch out for “free” sugar in foods; Knowing how much sugar you’re eating is complicated — more complicated than it should be.”

An Oct. 13, 2016 undark.org article is entitled: “In the Fight Against Obesity, the Real Enemy Is Oversimplification: Fat used to be Dietary Enemy No. 1. Today, it’s sugar. But reductions in the consumption of both have done little to curb obesity rates. Why?”

A January/February 2017 Atlantic article is entitled: “The Sugar Wars: Science can’t prove it and the industry denies it, but Gary Taubes is convinced that the sweet stuff kills.”

A Jan. 12, 2017 CBC article is entitled: Added sugar often found in Canadian products marketed as ‘healthy,’ researchers find: Why ‘you really need to be a detective’ when reading food labels.”

A Jan. 16, 2017) CBC The Current podcast, entitled “Is sugar killing us? Author Gary Taubes makes his case,” provides a great overview of the distinction between evidence (that is, the facts of the matter, in this case related to the science related to nutrition) and the frame within which scientific facts are positioned.

A March 17, 2017 CBC article is entitled: “Amazon men in their 80s have the arteries of Americans in their 50s: Lancet study shows diet low on processed carbs, sugar, while active living boost heart health.”

A March 17, 2017 Guardian article is entitled: “Tsimané of the Bolivian Amazon have world’s healthiest hearts, says study: Heart attacks and strokes are almost unknown amongst the Tsimané thanks to a high carbohydrate, low protein diet and active lifestyle, say researchers.”

A summary of the research report from the Society for Research in Child Development, on which the article is based, reads:

“Emotional eating is not uncommon in children and adolescents, but why youth eat emotionally has been unclear. Now a new longitudinal study from Norway has found that school-age children whose parents fed them more to soothe their negative feelings were more likely to eat emotionally later on. The reverse was also found to be the case, with parents of children who were more easily soothed by food being more likely to feed them for emotional reasons.”

An April 26, 2017 CBC article is entitled: “Pass the butter: Cutting saturated fat does not reduce heart disease risk, cardiologists say: Focus should instead be on eating ‘real food,’ walking and reducing stress.”

A Jan. 26, 2017 Atlantic article is entitled: “The Startling Link Between Sugar and Alzheimer’s: A high-carb diet, and the attendant high blood sugar, are associated with cognitive decline.