I like from time to time to share reports, articles, and viewpoints from a wide range of visitors to the Preserved stories website. Such items do not necessarily represent my own views, and do not serve as my endorsement of particular viewpoints. 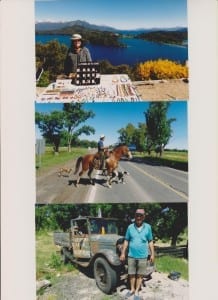 My daughter told me I would see armadillos at the side of the road. In Argentina there are great hairy and pink fairy species as well as banded varieties. She did not tell me they would be dead!

I explored the middle part of the country, northern semi desert Patagonia and the Pampas. The grasslands are agriculturally rich and contain more cattle than the 40 million people in Argentina. However soy is making big inroads to livestock operations. Argentinians love horses and gauchos still roam, but through gates since estancias were established.

I visited in November [2013], their spring, but was struck by the lack of wild flowers and tree blossoms, especially as the farming is not intensive. However the birdlife made up for the lack of wild animals and flowers.

Indigenous flora and fauna are the rule with the isolation formed by jungle to the north, Atlantic and Africa to the east, Antarctica to the south and the Andes and Pacific to the west.

Bright green parakeets are pervasive; communal nests high in trees can be seen with curious heads peeping out of each entrance hole. Salmon pink flamingos troll for food in shallow lakes. Buff necked ibises make their raucous calls. Oven birds, which make their nests of mud on a post, are charming and common. However the most adaptable bird on earth, the house sparrow, was there in strength.

The country has had the second greatest influx of immigrants after the States. Only 3% are First Nations and the balance European. 60% of the population have Italian ancestry. Perhaps then it is surprising Argentina was one of the first countries to permit same sex marriage.

Buenos Aries looks world class in the areas tourist visit and is home to one third of the country’s residents. 100 years ago the city was vying with New York to be the most entertaining and sophisticated in the world. Argentina was economically on a par with Canada.

The UK’s invasion in 1807 was unsuccessful. Perhaps if it was successful we would have had a warm equivalent of Canada. As it is, income is less than half of North America and the hinterland looks much more second world than Chile and Uruguay. 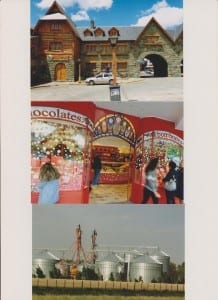 The UK treated Argentina as an honorary member of the Commonwealth over a hundred years ago. At one time 10% of UK’s foreign investment was in the Argentine. They built hospitals, schools and engineering projects including railways. Trains still run on the left, telephone and pillar boxes are the same as UK’s and rugby and horse polo are popular.

The investment ceased after World War 2 when Juan Peron, husband of Evita, nationalised most of these, although I believe the British forgot to pay for all the Bovril and corned beef that had kept the allies going through the war.

Corruption, internal fighting (and a small external war), and the manyana attitude have contributed to falling behind economically. Things seem inefficient. Being asked to stand in line for an hour on arrival for photos and thumb prints seems excessive. The car company had not prepared my papers for travel in Uruguay. However the UK passport gets you further than most. No reciprocity fee for me.

While there are lots of rich in Buenos Aries there are also lots of poor and it seems only the poor live in the rest of the country. The distances are vast and towns so remote that you need to keep your tank near full. I had to cut out UNESCO’s Valdez peninsula which is well known for whale breeding and home to other aquatic animals. Also I missed the Welsh speaking towns which were settled in the mid 1800s.

I looked at a number of towns in the Pampas which were invariably laid out in square block grids, designed with a set square and taking no account of geomorphology. Typically the one storey buildings with tall windows and doors line the street. Thus they are some of the dullest towns in the planet. A central block containing a park may relieve the tedium and if you are lucky you find some baroque architecture in public buildings or churches, although church architecture seems somewhat impoverished outside the cities.

It is often difficult to find the main commercial area. There are few supermarkets as car ownership is low. Some towns and cities are named after people (General Roca) or dates, for example when the town was founded. It must be confusing applying for an official document! 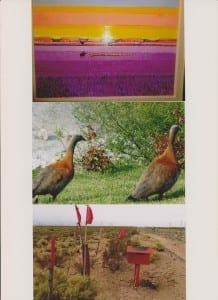 The road systems are nearly all one way with even streets going one way and odd numbered streets at ninety degrees. Unfortunately few are marked. Huge sleeping policemen and great dips in the road are common. If you miss seeing either one the car is launched into the air. There are few stop signs and if two cars arrive at an intersection at the same time they just veer off at right angles.

Traffic is supposed to give way to the right even on roundabouts. Argentinian motorists ignore highway codes. Cars are often dilapidated. Police are much more interested in paperwork and looking in trunks for illegal fruit. You soon become part of the culture. Deaths are marked with a star on a sign or on the roadway usually with a person’s name.

The long distance roads are paved which is more than be said for most of the side roads. There are eerie signs to settlements over 100 kilometers away that you approach through gateposts or a red earth track with grass in the middle. The cross country highways are narrow but with very large verges. Fortunately I enjoy overtaking.

You can often see highway shrines with red painted miniature houses, red flags and other red items. The tradition started with a Robin Hood type, little Gil the Gaucho, who was eventually executed by authorities. They are primarily maintained by long distance truck drivers to protect their road safety. Car drivers attach red ribbons to their rear bumpers also for protection. Gil is up for saintship even though the accident rate is high.

There are also Correa shrines named after an unknown mother who died in the desert but her baby survived still sucking milk. Large numbers of plastic bottles are a feature.

Sidewalks are invariably in poor condition. It seems that the frontage owner is responsible as surfaces vary with each property. Where the property has not been developed the side walk will be gravel or earth even in cities.

Bariloche seems like an upscale resort with majestic lake and mountain scenery and Andean skiing in the winter. But the grading of sidewalk is not even co-ordinated. It is a little bit of Switzerland run by Argentinians.

In the 1940s Bariloche built a wonderful human scale civic square with museum, town hall and other municipal buildings, with one side overlooking the lake. It has the vernacular architecture of the area with lots of orangy-brown polished pine enhancing the stonework. It is a strong statement of civic pride and a tourist attraction in itself. However roads run through it, at one side through an archway to the main street. The whole area is screaming for pedestrianisation.

A number of Swiss came to the area because it reminded them of home. The only thing to earn their living was making chocolate. Bariloche is now the South American capital of chocolate; I have never seen such a concentration of chocolate stores.

Interesting accommodation is overall relatively easy to find making each stay a destination in itself. San Martin is so high in the mountains that its lake flows to the Pacific. The chalet-hotel there had so much Andean charm and cosiness I had to take pictures to see if something could be adapted in our own home. In hotels generally fresh orange juice was served for breakfast and bathwater warm swimming pools were not uncommon.

Buenos Aries is a relatively short trip from both North America and Europe by plane. Argentina has the considerable benefit of beautiful spring weather when it’s dark and dismal in the northern hemisphere. The country is blessed with over 10 hours average of sunshine throughout the year.

Next time I will go north. I hope the town layouts are more interesting being in upland areas and I will concentrate on avifauna. My aim would be to see the yellow and purple (my favourite colours) yellow rumped euphonia in full mating colours – and a live armadillo.

[This concludes the report by David Godley]

I never met Phil Gray, author of Ghosts of Targets Past, in person but I much... March 24, 2014 New Yorker article highlights the deconstruction back story
Scroll to top