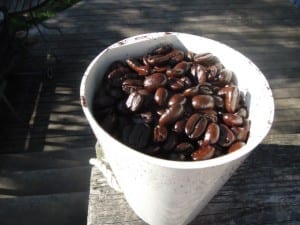 This post concerns an April 2014 research report about the Fairtrade certification program.

The report is outlined in a May 26, 2014 Globe and Mail article entitled: “Fairtrade coffee fails to help the poor, British report finds.”

After I sent out a Tweet from @jaanpill about this report, I received a Tweet from @FairtradeUK which said: “Fairtrade is a work in progress, we’re always improving but it does benefit many. See our response http://bit.ly/1jRzPHR”

The response (see link in previous sentence) stated that the Fairtrade Foundation “believes there are significant flaws in this study and that it is wrong to state that Fairtrade does not improve the lives of the poor.”

A May 30, 2014 overview regarding a recent research report regarding Fairtrade programs in Ethiopia and Uganda is available as a podcast at CBC Radio’s The Current:

How fair is fair trade?

If you are interested in this story, I would recommend that you take the time to listen to the podcast.

As the CBC’s The Current website (see link above) notes: “Christopher Cramer is an economist with the University of London’s School of Oriental and African Studies. He’s also the co-author of a new report called Fairtrade, Employment and Poverty Reduction in Ethiopia and Uganda. Harriet Lamb is the CEO of Fairtrade International, one of the largest fair trade certification groups.”

He also notes that it would be helpful for Harriet Lamb to rely on good quality research to advance her arguments, rather than relying on anecdotal comments about how helpful Fairtrade is to individual farmers.

A key message from the CBC Radio segment (on which there is agreement between the two interviewees) is that the Fairtrade story is part of a much wider narrative about poverty and labour conditions. The next segment, for the May 30, 2014 broadcast at CBC’s The Current, after the interviews highlighting the recent research regarding Fairtrade certification programs in Africa, is entitled: The World Food Programme’s fight against chronic hunger.

Fairtrade, Employment and Poverty Reduction in Ethiopia and Uganda (FTEPR)

I’ve posted several links at my Twitter account @jaanpill and at the Long Branch Historical Facebook page concerning an April 2014 research report published by the School of Oriental and African Studies (SOAS) at the University of London.

The key document, in this regard, is the research report itself, entitled Fairtrade, Employment and Poverty Reduction in Ethiopia and Uganda.

Also of relevance is an SOAS document entitled: How to do (and how not to do) fieldwork on fair trade and rural poverty.

SOAS overview of the research findings

A May 24, 2014 news release from the School of Oriental and Asian Studies (SOAS) at the University of London is entitled: Research finds Fairtrade fails the poorest workers in Ethiopia and Uganda.

The news release notes that:

It notes as well that:

The release concludes with a statement from Christopher Cramer, Professor of the Political Economy of Development at the University of London:

“The British public has been led to believe that by paying extra for Fairtrade certified coffee, tea and flowers they will ‘make a difference’ to the lives of poor Africans. Careful fieldwork and analysis in this four year project leads to the conclusion that in our research sites Fairtrade has not been an effective mechanism for improving the lives of wage workers, the poorest rural people.”

[End of excerpts from news release]