The following text, which I’m pleased to share with you, was forwarded to me by David Juliusson:

The Memorial Baton Relay will travel from Edmonton to Ottawa between August 10, the date of the Regiment’s call to service, and September 18, when it was formed in Ottawa.

The Regiment will be in Port Credit on September 7 where a 100th Anniversary plaque will be unveiled by Adrienne Clarkson (Colonel-in-Chief) at the Adamson family crypt at Trinity Church at 10 am.

Agar Adamson joined the Patricia’s in August 1914 and was one of the original officers who survived the war. He commanded the Regiment from June 1916 until May 1918, including the Battle of Vimy Ridge.

After the plaque dedication, the Memorial Baton Relay will run to the Adamson Estate where a second plaque will be unveiled.

The relay will continue to the Small Arms building at 1352 Lakeshore Rd. East [at Dixie Road and Lakeshore Road East] (Estimated Time of Arrival 11:30 am) and the PPCLI Centennial Display Team will showcase the Regiment’s history.

For more information on the PPCLI, please visit their web site here.

[This text has been forwarded to me by David Juliusson of Toronto – for which we owe many thanks!]

A previous post about the Princess Patricia’s Canadian Light Infantry Regiment can be accessed here. 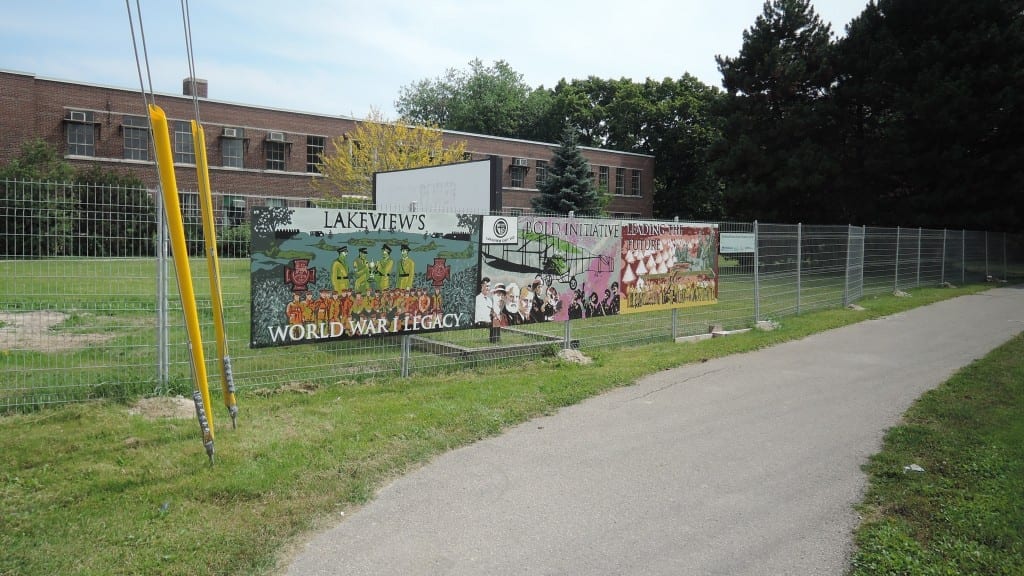 Three-part mural, in front of Small Arms building at Dixie Road and Lakeshore Road East, depicting the strong local connection to military history. The pathway on the right leads to the site, now commemorated with a plaque located along a bike trail just west of Haig Boulevard, of Canada's First Aerodrome. Jaan Pill photo

Previous posts about the mural at the Small Arms building can be accessed here and here.