Given that the summer is over, and discussions about the Malcolm Campbell High School Sixties Reunion, set for Oct. 17, 2015 at Old Mill Toronto, have now resumed, I’m pleased to share with you a story about the vital role that the Battle of Chateauguay played in ensuring that the United States gave up on its plan to conquer Canada during the War of 1812.

I mention Chateauguay because from time to time MCHS grads speak about this great community.

I note that even now, Chateauguay is in the news – in the “good news” category of national news reports, in fact.

When I was in high school, I did a half-decent job of memorizing my notes of Mr. Hannah’s history lectures, so that I would be well prepared for the exams that we were required to write, in order to show our understanding of, or at least our enthusiastic acquaintance with, the great events of the past.

Aside from that, my interest in history is something that has emerged in recent years.

So, today’s history lesson, which I’m pleased to share with visitors to the MCHS 60s Reunion Category at this website, among other site visitors, highlights information about Chateauguay from a previous post that I wrote over the summer. I will begin with a brief reference to the other great battle that saved Canada, the Battle of Crysler’s Farm, which took place in Ontario. The battleground is now under water, as a result of the building of the St. Lawrence Seaway. 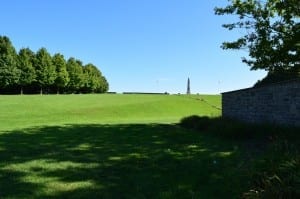 An overview of the battle notes:

“[Lieutenant-Colonal Joseph Wanton] Morrison’s victory was paid for in blood. His ‘corps of observation’ suffered 200 casualties, or about one-sixth of his total force. The greatest percentage of casualties was taken by the Canadian Fencibles, a regiment raised in Quebec and whose ranks were about 50 per cent francophone. They suffered a casualty rate of nearly 33 per cent. Of note is the fact that of the 270 Canadian regulars under Morrison’s command that day two-thirds were French-speaking soldiers from Quebec.

“Stunned by the ferocity of the Anglo-Canadian army and their Mohawk allies, Wilkinson’s broken and dispirited army went into winter quarters at French Mills (present day Fort Covington), ending the threat to Canada.”

[End of excerpt. I’ve corrected a typo concerned with the spelling of Morrison.]

At Chateauguay, a military force of just over 300 British-led Canadiens defeated a force of at least 3,000 American troops

As I have noted at another post, this battle, combined with the defeat of another invading army at Chateauguay on October 26, saved Canada from conquest in 1813. The Battle of Chateauguay is described in Field of Glory: The Battle of Crysler’s Farm, 1813 (1999).

In that account, Donald E. Graves notes (p. 110) that the Battle of Chateauguay was “a clear demonstration of how a well-led and positioned military force can hold off an opponent vastly superior in numbers. In the final analysis, just over three hundred Canadiens led by [Charles] de Salaberry, with the support of [George] Macdonell, had beaten off an attack by at least three thousand American troops who came into action. It was not a question of courage, for courage was lacking on neither side; it was a question of leadership, and the fumbling and hesitant decisions and movements of [Wade] Hampton and [Robert] Purdy compare badly with the confident and sure decisions of the two British commanders.”

First Nations warriors supporting the British side contributed to the outcome of the Battle of Chateauguay and the Battle of Crysler’s Farm – and to the outcome of the War of 1812. It may be added that when the war was over, the December 24, 1814 Treat of Ghent, as Peter Snow (2013, p. 231) notes, “effectively left each side where it had been before the war began.” The exception was the First Nations side, which lost out.

More information about the War of 1812, and the initial project, by the United States, to conquer Canada can be accessed here.

I would add that Upper Canada Village is next to the Battle of Crysler’s Farm national historical site. I will admit this. When I was in elementary school in Montreal, and heard about people visiting Upper Canada Village, for whatever reason the prospect of visiting the site did not interest me.

I’m hoping that in future I will indeed have the opportunity to visit Upper Canada Village. If any visitors to the Preserved Stories website have been to the latter site, it would be great to hear your account of the visit.

MCHS Sixties Reunion: John Kovac (MCHS 1971) has suggested we should invite... Combat Stress in the 20th Century: The Commonwealth Perspective (2010)
Scroll to top