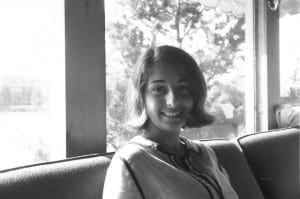 Barbara Sayfy, in a photo from when she was 17

I graduated from MCHS in 1970 and went onto Dawson CEGEP for a 3 year Business Administration program.

Raised in Montreal (lived in Ahuntsic and then in New Bordeaux living on Joseph Casavant Street). I have two older siblings – our family is now split from Vancouver to Toronto to Montreal. My niece and nephew are growing their families in Vancouver and I do get out there at least once a year but back to Montreal quite often (speeding along the 401!) to spend time with my senior Mom – she is aging gracefully at 91.

The family (that is me and my older brother who lives in Beaconsfield) is currently looking into alternate housing for her as this summer posed some medical challenges for Mom. As you can imagine, life is busy for all of us!

After graduation in 1973 from CEGEP, I joined a large financial institution on St. Jacques (BMO Bank of Montreal) in old Montreal and spent the majority of my career in that organization as an Executive Assistant. I accepted a transfer to Toronto in 1981 and have been living in Etobicoke all these years. For the majority working in downtown Toronto locations, but now not enjoying the long commute.

My career took a turn twice in that I followed an Executive to a trust company in 1988 but then returned to BMO in 1994 (after this trust company was merged with a large life insurance company) and then I left BMO in the spring of 2008.

I have supported numerous Presidents during my career but have found the ideal position these past six years working at Plan International Canada Inc. – one of the world’s oldest and largest international development agencies, working in partnership with millions of people around the world to end global poverty. Plan Canada has only one agenda – to improve the lives of children.

I have been very fortunate to support an amazing female executive who has grown the revenues substantially. I also manage the Board process and enjoy working alongside the Board members who hold voluntary positions with our organization. A rewarding position as I consider this to be my last full time employment as retirement awaits me in a few years!!!

My work week stems anywhere from 40 hours to 50 hours and am often tied to the ‘blackberry’ but luckily my assistant also enjoys what she does and we are quite the team.

Our family still owns a ‘cottage’ on Lac Simon (Cheneville, QC) which is located northwest of Montreal and I do spend as much time there as possible during the summer. I believe my MCHS yearbook entry mentions the lake but also mentions that my aim was to marry a millionaire.

Moving to Toronto back in the early 80’s, I lost touch with many of my high school friends but I did reconnect with a few of the gals two years ago by chance running into one of them at my office lobby and have sent them the notice for this 60’s reunion. Luckily, I met Heather Liddell just by chance as well at one of our Condo meetings when she was running for the Board. We are now good friends and neighbours.