A Nov. 11, 2014 CBC article is entitled: “Muzzling federal scientists may be damaging to government itself.”

A Dec. 7, 2014 Toronto Star article is entitled: “Toronto is divided, but not as badly as other major cities.” The subhead reads: “All North American cities are splintering, but the causes relate to a broader economy that municipal governments have little power to change.”

A Jan. 16, 2015 Toronto Star article is entitled: “Mapping our political divides: A team of political scientists has mapped out Toronto’s ideological landscape by ward, identifying where the city’s political left and right reside.” 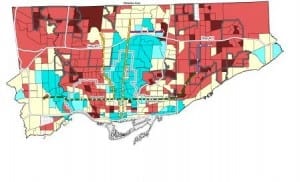 The map is from David Hulchanski’s “Three Cities Within Toronto” document, accessible from a link at the blog post you are now reading. 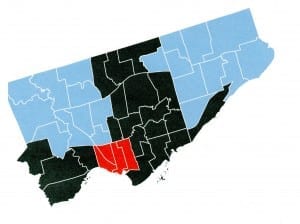 An Oct. 28, 2014 CBC The Current discussion involving three panelists on Oct. 28, 2014 offers an overview of the dynamics that are at play, in the creation of the results portrayed in the map of the Oct. 27, 2014 mayoral election results.

Among the points made in the discussion (this is my summary):

Another way to say this is that the eradication of evidence, and the celebration of truthiness, can be strongly appealing under specified circumstances.

A well-crafted slogan, that is not based upon evidence, can pack a tremendous emotional wallop. Knowledge is power, and that the absence of knowledge can be leveraged in powerful ways.

Peter Mendelsund (2014: 31) comments: “Characters are ciphers. And narratives are made richer by omission.”

Decisions made in the absence of evidence may not be good decisions. In the long run, such decisions may lead to chaos and destruction.

Hulchanski’s research and the eradication of evidence

An Oct. 7, 2014 Toronto Star article is entitled: “Eye-opening research stopped in its tracks.”

The subhead reads: “The neighbourhoods mayoral candidates live in and who their neighbours are affects who votes for them, their policies and outlooks to varying degrees, say political experts.”

An Oct. 28, 2014 Metro Toronto article is entitled: “It was a predictable election, now let’s change the tone on ‘Ford Nation.'”

Let us put it another way. Sense-making tends to include a dramaturgical element. Communications tend to involve some element of performance, of theatre. They also tend to feature the application of instrumental reason, which can be used for any end, good or evil.

Effective communication, whichever of the “Three Cities within Toronto” one happens to live in, possesses a dramaturgical element. Honest statements of facts, as well as scams and scamming, in a figurative or literal sense, can be found in each of the “Three Cities.”

Simple, well-crafted soundbites or narratives, based upon facts or in the absence of them, are capable of having a strong, and strongly motivating, emotional impact. The outcome, at any given moment, can be constructive or destructive, depending upon the circumstances and one’s point of view.

Updates: Where does inequality flourish the most?

An Oct. 22, 2014 Torontoist article is entitled: “Immigration and Visible Minority Status Shape Toronto Election Turnout, Study Finds: Candidates often don’t reflect the diversity of their constituencies — and that may be keeping some residents away from the ballot box.”

A Nov. 6, 2014 Globe and Mail article is entitled: “How Toronto, Vancouver and Montreal became cities split by class.”

“Even after adjusting for income, left-leaning metros tend to have worse income inequality and less affordable housing”: Oct. 29, 2014 Atlantic

A March/April 2014 Mother Jones article is entitled: “What If Everything You Knew About Poverty Was Wrong?”