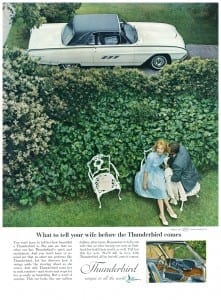 Thunderbird: Unique in all the world. Early 1960s ad.

The tagline is: “Thunderbird: Unique in all the world.”

What to tell your wife before the Thunderbird comes

You won’t have to tell her how beautiful a Thunderbird is. She can see that no other car has Thunderbird’s spirit and excitement. And you won’t have to re­mind her that no other car performs like Thunderbird. Let her discover how it swings aside the steering wheel as she enters. And only Thunderbird seats her in such comfort – and steers and stops for her as easily as breathing. But a word of caution. This car looks like one million dollars, after taxes. Remember to tell your wife that no other luxury car costs so little. And few hold their worth as well. Tell her this for now. She’ll fall in love with Thunderbird all by herself, once it comes.

I bought the ad at a monthly antiques show at Cloverdale Mall in Toronto.

Many sources of commentary about post-Second World War advertising and the postwar decades are available. Among them is The Mechanical Bride: The Folklore of Industrial Man [sic] (1951) by Marshall McLuhan.

A contemporary take on things is provided by a Jan. 29, 2015 Globe and Mail article entitled: “Shelly Lazarus: A front seat witness to advertising’s gender shift.”

Question: You had a front seat for how advertisers changed their approach in speaking to women. What was that like?

Answer: Advertising reflects the values of a society at a period of time. I don’t think it can lead. If we had had advertising at that time that showed independent women, I don’t think it would have had any impact. The truth is, women really did judge themselves at that time, by the quality of the meal served at night and how white the shirts were, and whether the coffee was of high quality, and all that. You could argue with them, but those were their values. But as women awakened to the women’s movement and started to think, “I can play a role that’s much larger than being the maker of the coffee in the morning,” then advertising could be nudged along to show women playing a larger role. When I show this advertising, people start guffawing or hissing. I say, I only wish that back in the 1960s, that was the way women reacted, but they didn’t. It worked. It sold stuff. If it wasn’t relevant, it wouldn’t have sold anything.

What evidence is available regarding the relationship between the hippies of the 1960s and the American advertising industry?

The Q & A brings to mind a previous post entitled:

The hippies were the creation of the American advertising industry, according to Thomas Frank (1997)

The reference at the latter post is to The Conquest of Cool: Business Culture, Counterculture, and the Rise of Hip Consumerism (1997).

The voice of Donald Duck

Another Frank Thomas – same name, different person – is the old-time Disney animator whose work is highlighted at this post:

Mental imagery, as Frank Thomas and Ollie Johnston explain in their 1978 talk in Toronto, played a key role in the portrayal of Walt Disney’s animated characters

The latter Frank Thomas is the author of a study entitled:

The Illusion of Life: Disney Animation (1995)

A memoir of teaching English in North Korea

With regard to worldviews a more recent post comes to mind:

The latter is a sensitive, insightful, beautifully crafted study that addresses, among other things, the powerful role that imagery and narratives – accompanied by greater or lesser degrees of control over evidence and fact-checking – have played, for better or for worse, in societies around the world throughout human history.

The Ford ad also brings to mind a story about a day in the early 1960s at Malcolm Campbell High School in Montreal:

Among the many resources that address the 1960s, a useful overview is available in Mad Men Unbuttoned: A Romp Through 1960s America (2010).

A review at the Toronto Public Library website notes:

“Well, maybe that romp in the subtitle is an exaggeration. In fact, this is a pretty quiet book, although its author is clearly an enthusiastic fan of the hit TV series Mad Men (she operates a Web site with the same name as the book), and the book is sure to appeal the show’s many devotees. Vargas-Cooper uses the show, about advertising executives in the 1960s, as sort of a portal into the decade, showing how television fiction reflects the era in which it’s set. She discusses some real-life advertising giants (Ogilvy, Burnett, Daniels), talks about social mores (particularly sex), and delves into pop culture (books, movies, etc.). The book is packed with information, and some proves quite fascinating; but readers who aren’t serious fans of the show may be put off by the bland prose and the distractingly large number of footnotes. A thoroughly enjoyable handbook, though, for anyone who wants more information about what Don Draper and his colleagues and friends smoked, drank, read, and talked about. – Pitt, David Copyright 2010 Booklist

Among the book’s highlights (from my perspective as a student of the history of illustration) is a brief – and in my view apt and interesting – overview of “An Illustrator’s Icon: Bernie Fuchs” (p. 42).