The headline for this two-page magazine spread reads:

This is Mercury for 1965 …now in the Lincoln Continental tradition 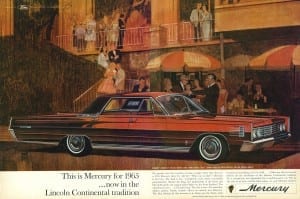 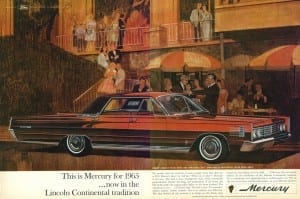 Original version of the scan (scanned by Reprodux, Etobicoke, Ontario). As is typical of two-page magazine ads in the 1960s, the two images do not match up. There are slight misalignments, which I enjoy seeing. I like it when lines are joined together with a slight “dislocation” effect. It’s a phenomenon of enduring interest for me.

“We predict that the reaction of many people when they first see a 1965 Mercury drive by will be: “What car is that?” Mercury is that new. The look is new. Completely. Low, sleek, beautifully proportioned. (Notice the long, low proportions of the hood, the full-width grille, the unique pillar lights on the front fenders.) The wheelbase is new . . . 123 inches long. The ride is new. It’s smoother, solider, quieter. Inside, outside-this is an entirely new Mercury. The idea behind all this newness is to bring you the finest, most luxurious, best-riding car in its field . . . a Mercury that accurately reflects all the excellence of the Lincoln Continental tradition. It’s a completely new departure for a medium-price car. We in­vite you to see how well the idea works-at your Mercury dealer’s.”

Under the image of the Mercury the text reads:

At the bottom of the advertising copy the text reads:

Among the many resources that address the 1960s, a useful overview is available in Mad Men Unbuttoned: A Romp Through 1960s America (2010).

A review at the Toronto Public Library website notes:

“Well, maybe that romp in the subtitle is an exaggeration. In fact, this is a pretty quiet book, although its author is clearly an enthusiastic fan of the hit TV series Mad Men (she operates a Web site with the same name as the book), and the book is sure to appeal the show’s many devotees. Vargas-Cooper uses the show, about advertising executives in the 1960s, as sort of a portal into the decade, showing how television fiction reflects the era in which it’s set. She discusses some real-life advertising giants (Ogilvy, Burnett, Daniels), talks about social mores (particularly sex), and delves into pop culture (books, movies, etc.). The book is packed with information, and some proves quite fascinating; but readers who aren’t serious fans of the show may be put off by the bland prose and the distractingly large number of footnotes. A thoroughly enjoyable handbook, though, for anyone who wants more information about what Don Draper and his colleagues and friends smoked, drank, read, and talked about. – Pitt, David Copyright 2010 Booklist

Among the book’s highlights (from my perspective as a student of the history of illustration) is a brief – and in my view apt and interesting – overview of “An Illustrator’s Icon: Bernie Fuchs” (p. 42).

In terms of the history of illustration, the big things that has happened since the 1960s is the emergence of data-visualization and infographics as extensions of the traditional concept of an illustration as en element of storytelling based upon, and serving as a complement, to a written text.