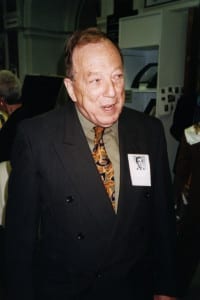 I’m currently catching up on still photo and video projects, related to the MCHS 2015 Reunion. One of the projects concerns a recent photo of Graeme Decarie, and a photo from the MCHS 1962-63 yearbook that I had spoken about with Graeme some time ago. I will include the photo from the yearbook in a subsequent post.

“I’m not sure I know the story. I must have been the speaker at something because 1. I’m wearing a tag with my picture on it and 2. I’m wearing a suit. I wore a suit on only the most formal occasions when I really had to. The interior looks like a church. Now, I have often spoken in churches and synagogues (synagogues more often), and I did, when I was living in the country, sometimes conduct services in local churches. But none of that explains the tag with my picture on it. That usually means a very large audience. I my last year in Montreal, I was invited to speak to teacher’s convention as the social studies teacher of the year. That’s the only one I can think of that fits.

“High school teachers had to wear suits. But universities are much more casual – and you can do radio in the nude. (And I was once on TV with a man wearing no pants (sitting behind a desk.)) Anyway, I just got used to casual. I commonly taught in jeans and a sweater.”

Graeme’s story about what people wear reminds me of the recent political action by Canadian high school students objecting to objections by administrators to “crop tops,” as a May 26, 2015 Canadian Press article at the CBC website notes:

Some days ago I noticed that many of the students walking to school at Richview Collegiate Institute in the morning were outfitted in crop tops. I didn’t think further about it until I got the inside scoop on how a “crop top” protest had been set up on Facebook.

I very much like the sense of political agency that is involved in this kind of protest. Demonstration of political agency is a worthy endeavour in a civil society, on the part of high school students or anybody else, in my personal opinion. I’ve discussed the concept of political agency at another post, on October 18, 2014, and with reference to another aspect of life in schools:

A June 1, 2015 Globe and Mail article is entitled: “Taking on school dress codes: Teen rebels with a cause.”

“We are currently in a moment of social action. Love it or hate it, young people – not just young women, but young men, too – are challenging their schools’ dress codes across the country. One recent example erupted at a Toronto high school, where Alexi Halket was sent to the office for wearing a crop top deemed ‘inappropriate.’ In response, Alexi organized ‘Crop Top Day: An Event Protesting the Sexualization of Women’s Bodies.’ The activist fire seems to be spreading from school to school. What does this mean for youthful politics in Canada? And what does this mean for feminism – long considered dead among younger generations, which are often labelled apathetic?

“The premise of the protests is that young women’s bodies and dress are being labelled ‘distracting’ to boys – a notion that contains underlying beliefs that are disturbing and dangerous. As ‘distractions,’ girls are held accountable for boys’ behaviour, an easy step away from blaming girls when boys sexually harass or even sexually assault them.

“Arielle Orvieto, 15, another one of the protesters, said more effort should be made to teach boys to respect girls and their bodies.

” ‘I agree there are some limits and we understand that,’ Orvieto said.

” ‘We just hope that the rules themselves are for both sexes instead of just aiming on females.’

“The protests in Montreal are part of what appears to be a growing trend.

“Students at Ontario schools in London and Toronto, as well as Moncton, N.B., carried out similar protests earlier this year, reviving a decades-old debate about what qualifies as appropriate school attire.

“The Commission scolaire de Montréal has not responded to a request for comment.”