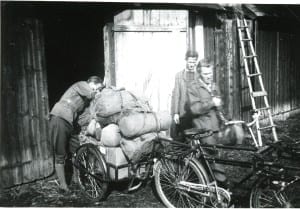 Estonia, Summer of 1944: Preparations for leaving the country. My parents and other family members escaped from Estonia to Sweden, in separate boats across the Baltic Sea, in September 1944 during the second Soviet occupation of the Baltic states. A family friend who made a similar journey (in her case, by sea to Germany) has remarked that her experience was like jumping from the second storey of a burning building and making a run for it. Click on photos to enlarge them; click again to enlarge them further. 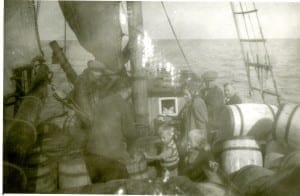 Boat on which my father and grandfather made it across the Baltic Sea in September 1944. My grandfather is on the right, in the photo.

I was born in Sweden in 1946, after my parents and several other members of the extended family including my grandparents on my mother’s side crossed the Baltic Sea to Sweden in the autumn of 1944.

They made the trip in two separate boats.

There were many close calls in the period of time leading up to September 1944.

My grandmother did most of the organizing, for the journey to the other side. Women could move about relatively freely, at that time, in the circumstances. Men of military age could not move about so freely. My grandmother was a keen organizer, with extensive networking capabilities.

One member of the family, one year old at the time, was given up for dead when he arrived in Sweden. He survived, because my mother decided she would do what she could, and would get the medical information that she needed, to enable him to survive. Thanks to her efforts, and her strong will, he survived.

These many years later, if you have a connection with those times, and if you now find yourself reading this post, let us celebrate the fact that you are, indeed, a survivor as well.

And that is what it was. It was the journey to freedom.

A Sept. 21, 2015 Globe and Mail article focusing on documentary photography by Sebastiao Salgado is entitled: “Humanity’s spirit and cruelty, in focus.”